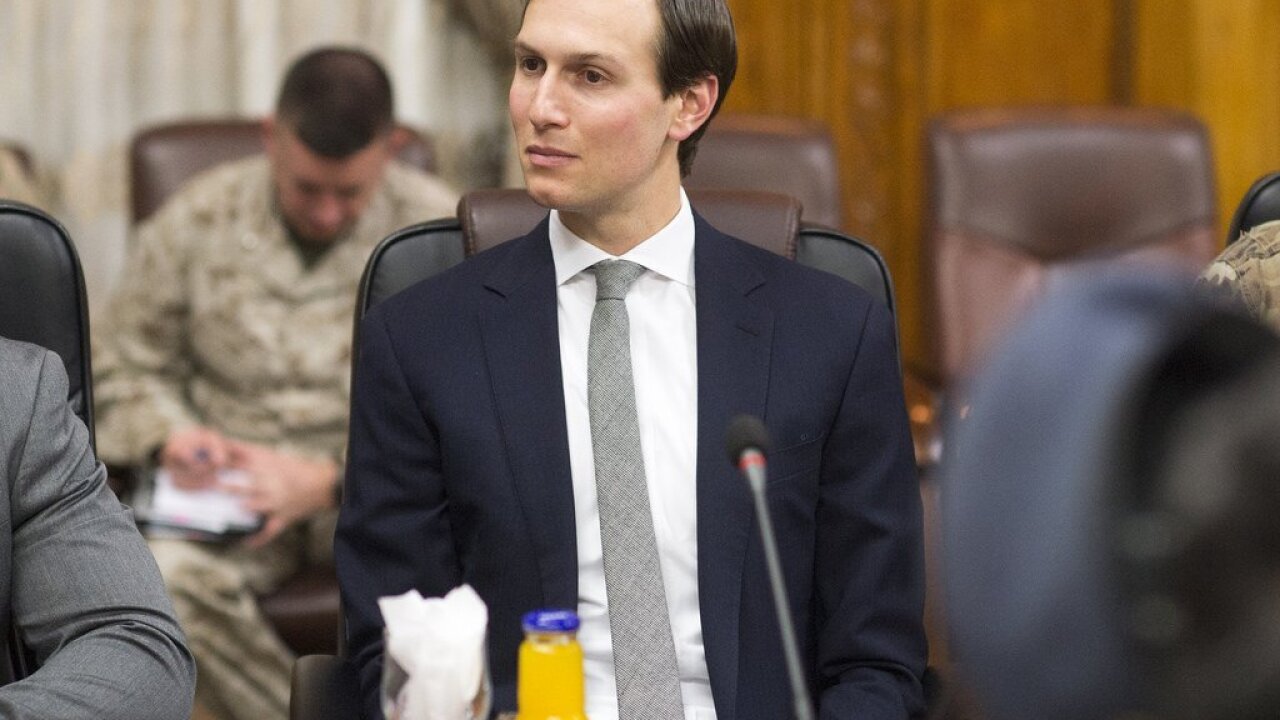 Jared Kushner, Senior Advisor to President Donald J. Trump, sits in on a meeting with Marine Corps Gen. Joseph F. Dunford Jr., chairman of the Joint Chiefs of Staff, at the Ministry of Defense in Baghdad, Iraq, April 3, 2017.

The deal was finalized in part thanks to the direct involvement of Jared Kushner, the President’s son-in-law and senior adviser. He shocked a high-level Saudi delegation earlier this month when he personally called Lockheed Martin CEO Marillyn Hewson and asked if she would cut the price of a sophisticated missile detection system, according to a source with knowledge of the call.

Pressured to finalize a massive $100-plus billion arms deal in the two weeks leading up to Trump’s trip to Saudi Arabia, Kushner hoped to maneuver a discount on Lockheed’s Terminal High Altitude Area Defense (THAAD) system during the Saudis’ visit to the White House on May 1 — a request that Hewson said she would look into at the time.

The New York Times first reported the exchange between Kushner and Hewson.

On Saturday, near the end of Trump’s first day in the kingdom, the two leaders inked a deal greenlighting a $109 billion defense deal, which Secretary of State Rex Tillerson said was a component of $350 billion in economic and defense investments between the two countries over the next 10 years.

Lockheed’s Hewson was on hand Saturday in the cavernous Riyadh ballroom where Trump and Salman made the deal official.

The company was “proud to be part of this historic announcement that will strengthen the relationship between” the US and Saudi Arabia,” Hewson said. The sales authorized under the deal would bolster Saudi Arabia’s security, provide an economic boon to both countries and “strengthen the cause of peace in the region,” she added.

The deal was a welcome sign for Saudi Arabia, which had grown nervous about the strength of its alliance with the US as President Barack Obama signed the nuclear deal with Iran and signaled a potential rapprochement with the Persian nation, which is fiercely at odds with Saudi Arabia. Trump, by contrast, has castigated Iran as a destabilizing power and criticized the nuclear deal, instead seeking to bolster partnerships with Sunni Gulf countries like Saudi Arabia — which Trump demonstrated by making his first foreign trip as president here.

In a statement, a White House official called the defense deal “a significant expansion of the over seven-decade long security relationship between” the US and Saudi Arabia.

“This package of defense equipment and services support the long-term security of Saudi Arabia and the Gulf region in the face of Iranian threats while also bolstering the Kingdom’s ability to contribute to counterterrorism operations across the region, reducing the burden on the US military to conduct those operations,” the White House official said.

Ultimately, the two sides were able to reach an agreement on a weapons package that amounts to nearly $110 billion in tanks, fighter jets, combat ships and the THAAD missile defense system, according to the White House.

It is unclear how much the Saudis will be paying for THAAD, but Trump called it a “billion-dollar system” last month when the US deployed the advanced missile defense radar to South Korea.

While calling the head of a major defense company and simply asking for a lower price is widely considered an unorthodox negotiation tactic, Kushner’s hands-on approach has drawn comparisons to when then-President-elect Trump criticized the stealthy F-35 fighter jet for being too expensive, and Hewson gave her “personal commitment” to cut the cost of the program in February.

And the details of how the call took place also provide a window into Kushner’s role during negotiations with the Saudis and the range of his influence on matters of foreign policy as a whole.

During last year’s presidential campaign and later during the transition, Kushner was identified by Trump’s team as the principal point of contact for foreign governments looking to either congratulate the new US leader or begin diplomatic talks.

The 36-year-old commercial real estate magnate started building a relationship with members of the Saudi royal family shortly after the election, a source told CNN, and was on hand when Trump hosted the deputy crown prince, Mohammed bin Salman, in March.

Issues of foreign diplomacy evolved into an interagency effort once the administration began, according to a source, and Kushner’s role in negotiating the arms deal was just one part of an larger effort that included the State Department, Department of Defense and National Security Council.

But the scope of Kushner’s influence on matters of foreign policy have remained in the spotlight through the early months of Trump’s presidency.

CNN reported last month that multiple White House and administration officials said Kushner had eclipsed nearly all of Trump’s West Wing and Cabinet advisers in terms of influence and established himself as the key envoy for those outside the administration.

White House press secretary Sean Spicer said at the time that Kushner was working jointly with the State Department to manage the administration’s foreign affairs.

“He’s continuing to work with them and facilitate an outcome. But he brings a perspective to this, and began doing that during the transition. But again, it’s not a binary choice where he’s doing this at the expense of somebody else.”