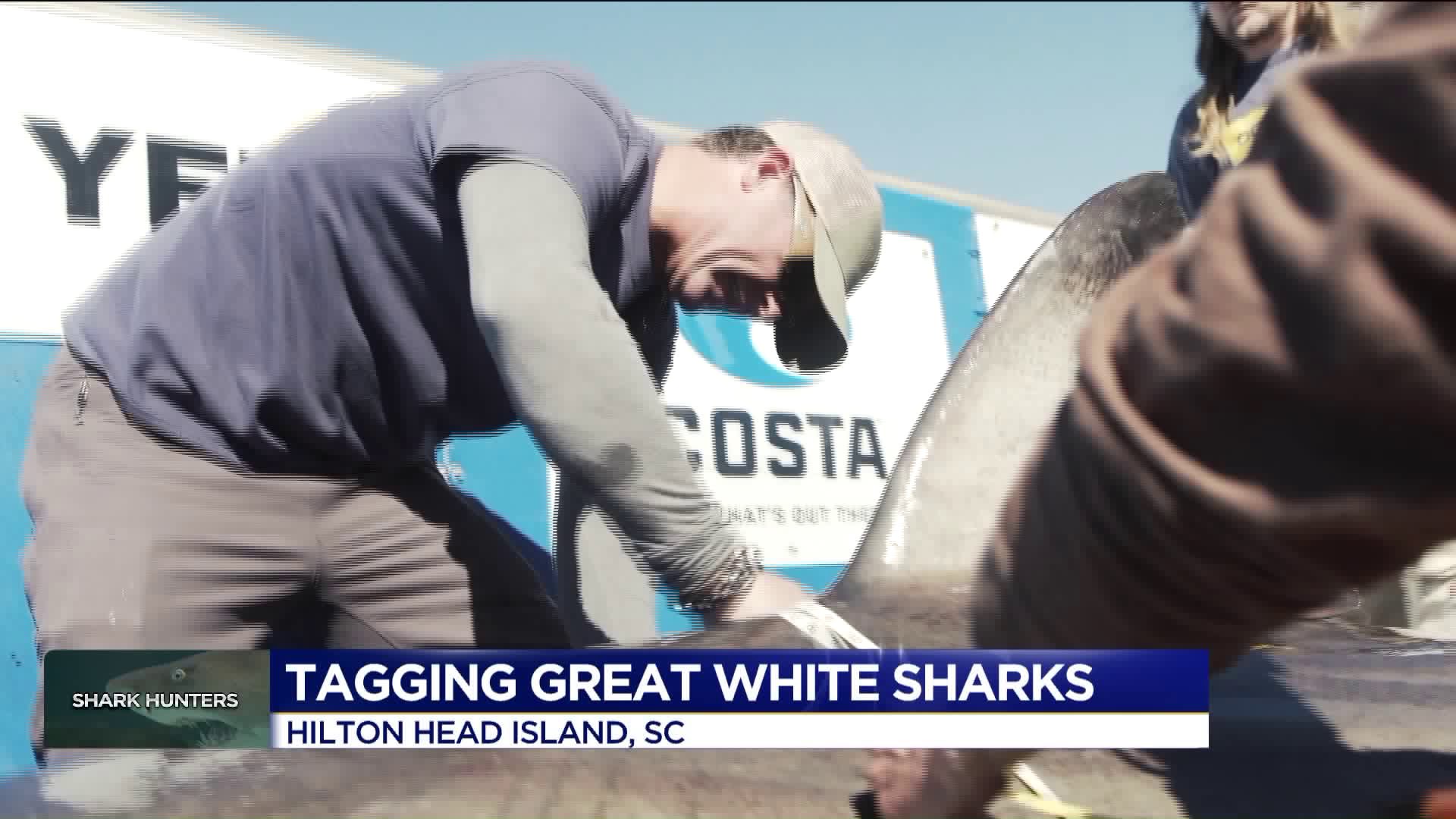 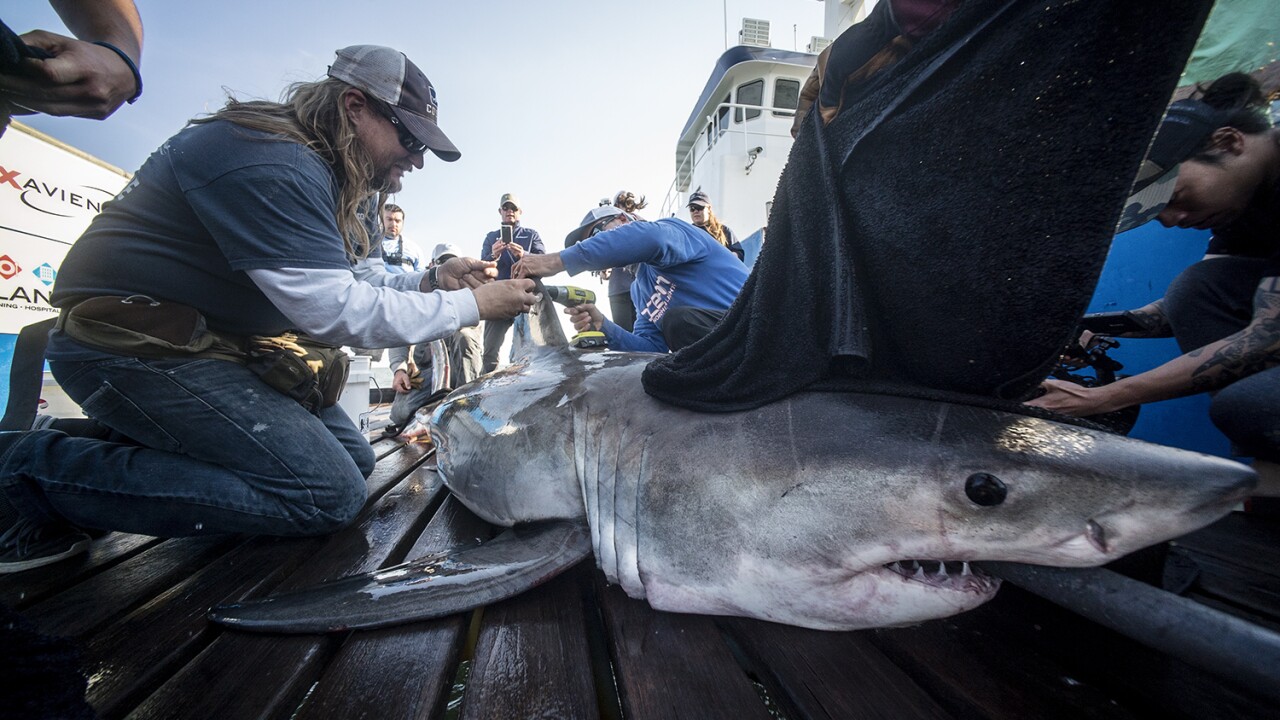 HILTON HEAD, S.C.- You think of sharks and you may think rows and rows of razor sharp teeth and a massive body thrashing beneath you in the depths of the ocean.

The sight of that fin swimming towards you in the water might make your heart skip a beat—but that fin is exactly what OCEARCH is looking for.

Chris Fischer is the Founder of OCEARCH, the ocean-based research team whose new mission is to save the Great Atlantic White Shark.

“Sharks are the lions of the ocean, they are the balance keepers. They eat and call out the weak, dead and dying so the strong can multiply. No large sharks means no fish,” said Fischer who has been trying to solve ocean issues for the past ten years.

Of course most people fear sharks and want to know where they are in the ocean, Fischer says OCEARCH accomplishes that too.

Each shark that is caught by Fischer and his team is tagged with a GPS tracking device. It will ping every time the sharks fin surfaces for 30 seconds.

For you, it means tracking the shark’s location so you can stay away from those beaches, but for scientists the movement of the sharks is fascinating and perplexing. 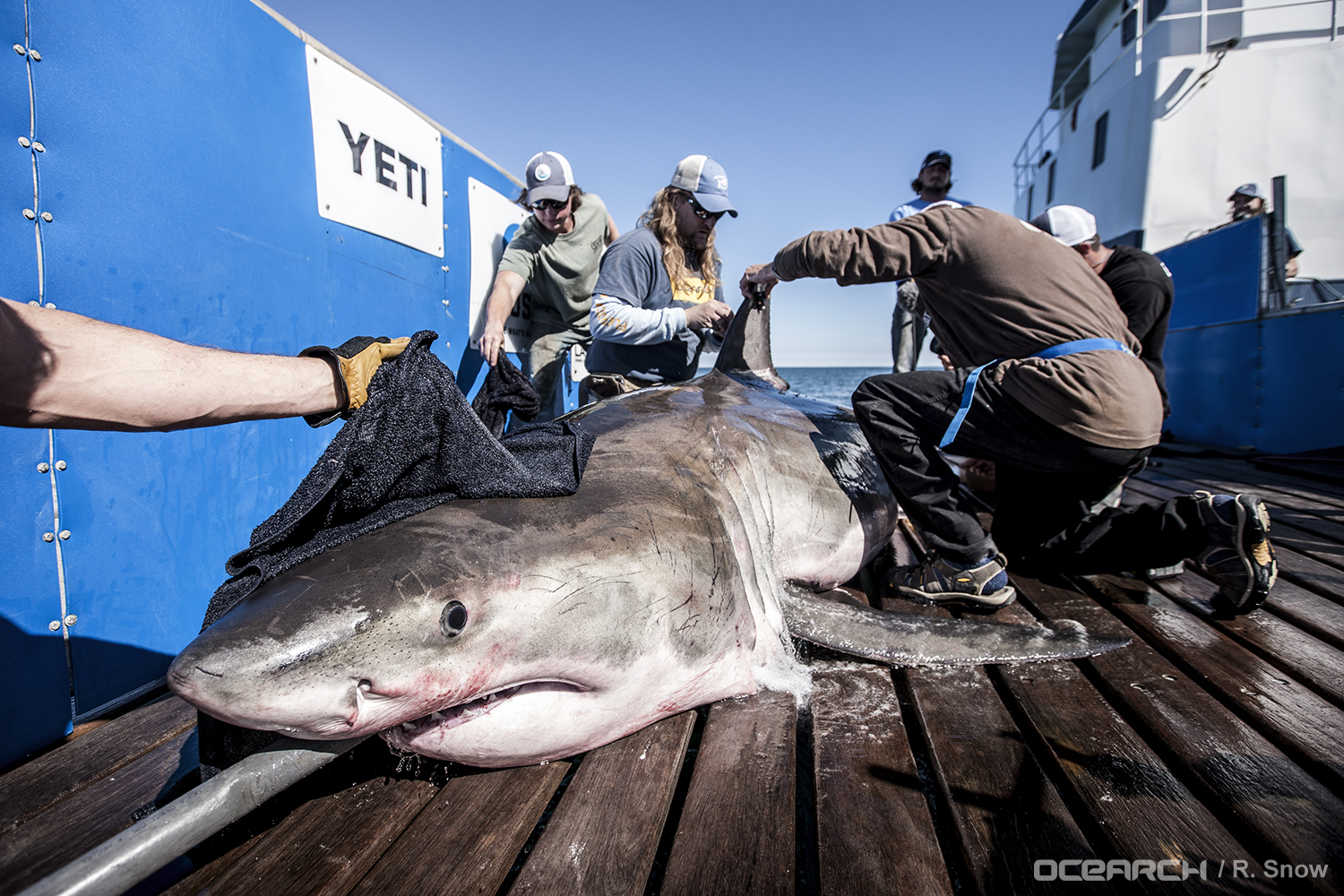 Fischer said it could be even more, meaning a shark tagged in Florida or Georgia, could end up off the coast of Virginia Beach.

That might scare you, but statistics show almost anything else in the world is more likely to kill you than being eaten by a shark.

Scientists aboard OCEARCH and other marine specialists say often times shark bites are a case of mistaken identity.

Their behavior in the ocean is much more well-known than their movement, migration and mating periods.

Lydia, one of the sharks tagged in Jacksonville, Florida in 2013 is blowing the science world’s theories apart with her travel and patterns of movement.

Chief Operations Officer of OCEARCH, Fernanda Ubatuba spoke on Lydia’s movement; “She has traveled 3600 miles! We did not expect these sharks to do such a large range of migration, it’s unbelievable.”

Scientists on the LowCountry Expedition off the coast of Hilton Head, South Carolina were on a mission to catch sharks and collect data from them before tagging and releasing them back into the ocean.

Fischer hopes that by making the information free and accessible it will generate knowledge and interest in the ocean so that we all can work towards saving it.

Fischer says he wants a clear blue ocean filled with fish so his kids can stare down into it throughout their lives and marvel at its wonder.

OCEARCH knows the key to that puzzle is the Great White Shark.

In order to solve the ocean crisis, Fischer says every one of the 22 people on board the OCEARCH has a job.

Fernanda Ubatuba explained just a few of those jobs to News 3’s Rachael Cardin as she shadowed the team for day at sea. “We go from blood samples which gives us info on nutritional contaminants in the water, stress physiology, hormone levels about reproductive activity in the shark’s life. We also do ultrasounds and different tags with the movement of the shark, bacterial work and parasites,” said Ubatuba.

The OCEARCH vessel itself is a big reason why scientists can do this type of research.

On this expedition scientist broke ground when they collected a sperm sample from an adult male Great White Shark, which was named Hilton; “Hilton is a great accomplishment for us. We were able to collect the sperm of a mature male white shark, groundbreaking science for us,” said Ubatuba.

Hilton, and all the sharks are caught and tagged with two devices; a coastal receiver and a tracking device.

The Coastal receiver allows pings to send back information for anywhere from one to five years. The Tracker is implanted into the shark’s skin and lasts 10 years.

The devices allow information to flow into the OCEARCH website.

The pings show each shark’s location. Many of the sharks even have their own twitter handle to make the shark’s voice come to life.

Fischer, excited about all its connectivity invites you to connect. “Jump into the project, track the sharks engage with them. OCEARCH is not owned by anyone, it’s owned by everyone,” he said.

“We all want to make sure that the future generation has an abundant resource so they can enjoy it as much as we have in our lifetime, it’s the passion that brings us together,” said Fischer.

Great white shark trapped on beach, and causing a scene