Life expectancy differs by 20 years between some US counties 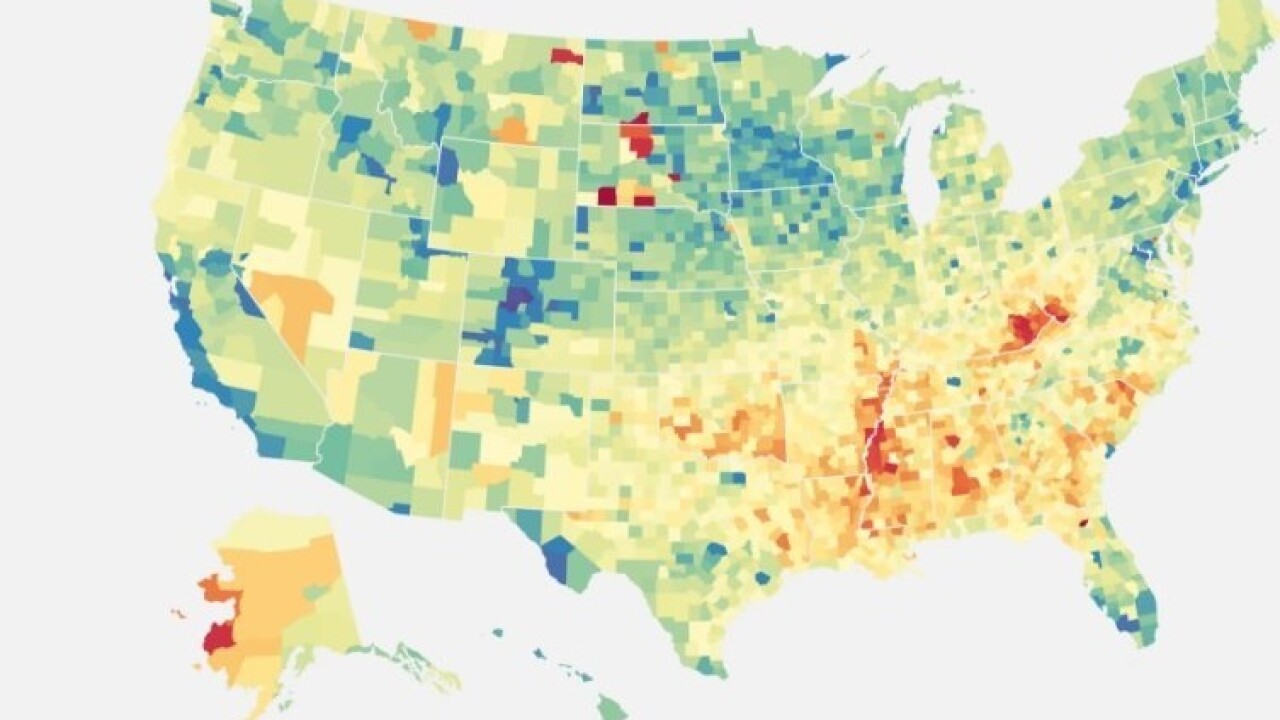 By 2014, life expectancy in the United States had increased for men and women to 79.1 years. But there’s a gap of more than 20 years between counties with the lowest and highest life expectancies.

By 2014, life expectancy in the United States had increased for men and women to 79.1 years. But there’s a gap of more than 20 years between counties with the lowest and highest life expectancies.

Life expectancy at birth differs by as much as 20 years between the lowest and highest United States counties, according to new research published Monday in the medical journal JAMA Internal Medicine.

Dr. Christopher J.L. Murray, lead author of the study and director of the Institute for Health Metrics and Evaluation at the University of Washington, estimated life expectancy for each US county from 1980 through 2014. Murray and his colleagues analyzed county-level data and then applied a mathematical model to estimate the average length of lives.

But the numbers aren’t the same everywhere. Looking at the finer details, Murray and his colleagues calculated a gap of 20.1 years between US counties with the lowest and highest life expectancies.

The counties with lowest life expectancy are located in South and North Dakota, while counties along the lower half of Mississippi, in eastern Kentucky, and southwestern West Virginia also showed lower life expectancies compared to the rest of the nation. The North and South Dakota counties include Native American reservations.

At the other extreme, residents of counties in central Colorado can expect to live longest, Murray and his colleagues said.

While the study does not directly answer why we see low or high life expectancies in specific counties, it does look at what factors contribute to the overall gap between some counties, said Murray.

“We can see that many of the counties with very low life expectancies in the Dakotas, like Oglala Lakota County in South Dakota, overlap with large Native American reservations including the Pine Ridge and Rosebud reservations,” said Murray.

Conversely, Summit County, Colorado, ranked as the county with highest life expectancy in 2014 at 86.8 years, is home to several ski resort towns.

“For both of these geographies, the drastically different life expectancies are likely the result of a combination of risk factors, socioeconomics, and access and quality of health care in those areas,” said Murray.

“Behaviors like smoking and physical activity, along with risk factors like obesity and diabetes, are also very important,” he said.

Still, almost all counties throughout the nation showed improvement over time, though the number of additional years varied across the nation. Counties in central Colorado, Alaska and along both coasts experienced larger increases than most other counties. Meanwhile some southern counties in states from Oklahoma to West Virginia experienced either no improvement or very little over time.

However, people between the ages of 25 and 45 show an increased risk of death in 11.5% of counties over the study period.

The study didn’t evaluate what might drive changes in mortality risks for specific age groups, Murray said, but he speculates that the same general factors that impact life expectancy overall may drive differences for those ages 25 to 45.

What causes differences in life expectancy? The reasons for life span inequality have been explored in previous studies so the current study examined the extent to which just three factors contributed to lower or higher survival. The three factors are socioeconomic levels and race/ethnicity, behavioral and metabolic risk, and health care.

“Risk factors — obesity, lack of exercise, smoking, hypertension, and diabetes — explained 74% of the variation in longevity,” said Murray. “Socioeconomic factors, a combination of poverty, income, education, unemployment, and race, were independently related to 60% of the inequality, and access to and quality of health care explained 27%.”

The authors used new methodologies that are more precise than past models, but county level data are all subject to error, the authors note. If recent trends are allowed to continue, the differences in life expectancy across counties will increase, not decrease, the researchers add.

For the first time since 1993, US life expectancy in 2015 dropped significantly for the entire population, not just certain groups, the Centers for Disease Control and Prevention reported in late 2016. CDC researchers warned that a one-year shift does not mark a trend.

Ellen Meara, a professor or health economist at the Dartmouth Institute for Health Policy and Clinical Practice, said many factors impact life expectancy. She was not involved in the new research.

“Socioeconomic factors like education and poverty can shorten lives of individuals, and it may be bad to live in areas with high rates of poverty and less educated adults,” said Meara. “Similarly, sedentary lifestyles (which are reflected in obesity rates) and smoking are two of the biggest individual risks of poor health and premature death. For people who develop a disease like diabetes or hypertension, also measured in the study at the county level, risk of death is higher.”

Meara noted that the authors used “rigorous methods” to gain a more “comprehensive look” at deaths by county and age group. “This research echoes what we have been learning from studies in other settings over the past decade,” she said. “Disparities in mortality have widened over time.”

Still, understanding differences across geographic areas can provide clues, said Meara, about what might contribute to improvements over time.

“To have a gap of 20 years in a country as wealthy as ours is absurd,” she said.

Murray agrees. “The inequality in health in the United States — a country that spends more on health care than any other — is unacceptable,” he said. “Every American, regardless of where they live or their background, deserves to live a long and healthy life.”