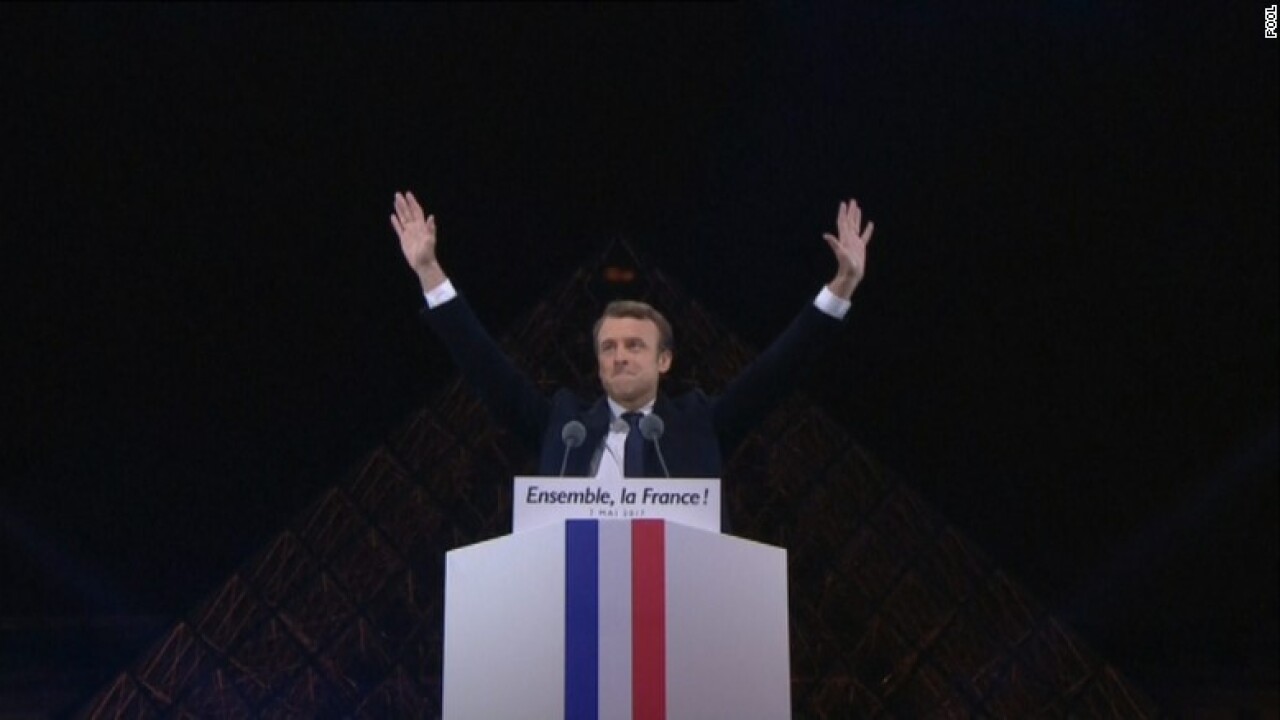 Macron has won 66.06% of the vote with 99.99% of registered votes counted, France’s interior ministry said.

In a clear rejection of France’s mainstream parties, voters have turned to the 39-year-old to help bring unity to a deeply fractured country.

The result is remarkable considering Macron, a centrist independent, campaigned without a traditional party and with no experience of governing.

“I know the country is divided and this has led to people voting for extremes,” Macron said in a speech at his team’s headquarters.

“I understand the anger, the anxiety, the doubt which many of you have expressed and it is my responsibility to hear that.

“A new page of our history has turned this evening, I want that page to be one of hope and refound trust, the renewal of our public life, will be at the base of what I do from the very first day of our Presidency.”

Later Sunday night, Macron addressed thousands of supporters outside the Louvre in Paris where he also attempted to reach out to those who had voted for Le Pen.

After taking a long walk towards the stage to Ludwig van Beethoven’s “Ode to Joy,” the anthem of the European Union, Macron spoke of the need for unity.

He chided his supporters for booing at the mention of Le Pen’s name and instead urged the country to come together.

“I also want to say a word for those who voted today for Madame Le Pen,” he said. “No, don’t boo — they expressed today anger, dismay and sometimes convictions.

“I respect them but I will do everything during the five years to come to make sure there is no reason at all to vote for extremes.”

Earlier, Le Pen told supporters she had called to congratulate Macron after exit estimates projected a heavy defeat for the far-right candidate.

“I have called Mr. Macron to congratulate him on his election and I wished him success in this very senior post he is going to occupy and also the great challenges in front of him.

“We have seen a major decomposition of French political life, of the old political mainstream parties and what we see now is a real new configuration which is emerging between the patriots and the new liberals,” she added.

French president Francois Hollande said that he had called Macron to “warmly” congratulate him on his victory.

“His large victory confirms that a very large majority of our citizens wanted to assemble around the values of the Republic and mark their attachment to the European Union as well as to the openness of France in the world,” Hollande said in a statement.

The scenes of jubilation extended beyond France.

European Commission chief Jean-Claude Juncker wrote on Twitter that he was “happy that the French chose a European future,” while president of the European Council Donald Tusk congratulated the “French people for choosing Liberty, Equality and Fraternity over tyranny of fake news.”

British Prime Minister Theresa May and German Chancellor Angela Merkel were also quick to send their congratulations to Macron, who has been outspoken of his desire to work with France’s European partners.

US President Donald Trump and Chinese President Xi Jinping also congratulated Macron, with Trump writing on Twitter: “Congratulations to Emmanuel Macron on his big win today as the next President of France. I look very much forward to working with him!”

The two-round election, which has played out like something of a soap opera, had been hit with another scandal at the eleventh hour, when Macron’s campaign announced it had been the target of a “massive and coordinated” hacking operation.

Around 14.5 gigabytes of emails, personal and business documents were posted to the text-sharing site Pastebin hours before the campaign period came to a close Friday night.

Macron’s party said the hackers had mixed fake documents with authentic ones “to create confusion and misinformation.” It is not clear who was behind the attack.

With the presidential election almost wrapped, attention will soon turn to the parliamentary contest.

Macron, whose party En Marche! is less than a year old, is starting from scratch.

If he does not persuade enough voters to back his candidates, he will have to strike deals with other parties in order to push through his legislative agenda.