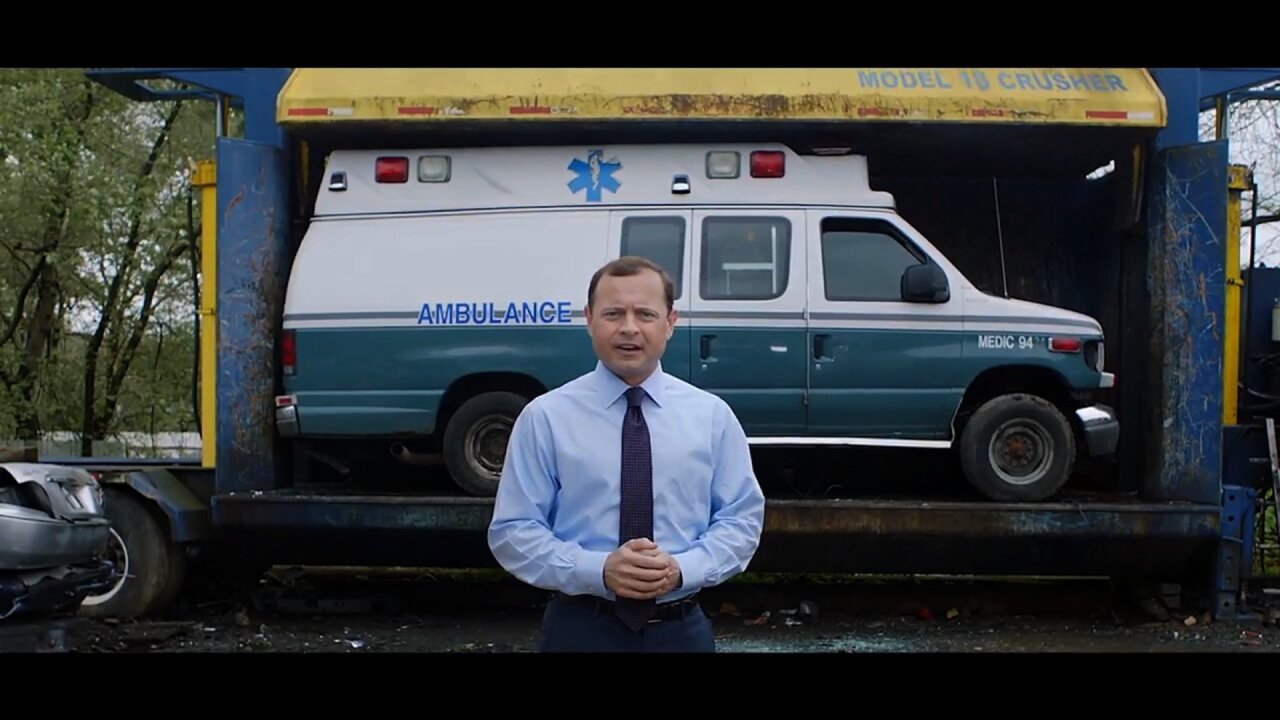 Tom Perriello, a former Democratic member of Congress running for governor this year in Virginia, is seen here in a TV ad about health care.

Tom Perriello, a former Democratic member of Congress running for governor this year in Virginia, is seen here in a TV ad about health care.

It took seconds for the House passage of the Republican health care bill to have a crushing impact on the Virginia governor’s race. Literally.

Moments after the deciding vote was cast, upstart Democratic candidate Tom Perriello released a campaign ad that showed him standing in front of an ambulance being flattened by an automobile compacter. The symbolic but powerful image, which Perriello said the ad was a metaphor for what GOP leaders are trying to do to affordable health care, quickly went viral, demonstrating the angst over health care and its uncertain future.

The campaign has not said if the ad will ever make it on television or even be used in a digital buy, but it seems clear the video achieved its purpose: It captured the moment in a memorable way while calling attention to the candidate, something that Perriello’s team has successful done a number of times as they hope to defy the odds and topple Lt. Governor Ralph Northam in the Democratic primary in June. Under Virginia’s constitution, Gov. Terry McAuliffe cannot run for another consecutive term.

Northam, who is considered the frontrunner, has been an announced candidate for the State’s top job for more than a year. He enjoys the support of a lengthy list of Democratic officials, including every single statewide officeholder. They all backed his campaign before Perriello decided to enter the race.

Perriello’s campaign, however, has gotten off to a surprisingly quick start. He has raised more than $2 million, has pulled even or ahead in most public polls, and is drawing big crowds of enthusiastic supporters. Perriello is even pulling support from popular, national progressive figures like Sen. Bernie Sanders, I-Vermont, and former Hillary Clinton campaign chairman John Podesta.

Despite his momentum and support from outside Virginia, Perriello is not making much progress with Democrats in the state, whose support for Northam remains strong.

Sen. Tim Kaine, the party’s nominee for vice president last year and a popular figure in Virginia, was shown Perriello’s ambulance ad on CNN’s New Day, and even though he wasn’t asked if he supports Northam, he volunteered his backing anyway.

“Ralph’s a pediatrician; Ralph is a doctor who is a strong supporter of the Affordable Care Act,” he said. “You will hear that as a feature in the governor’s race this year in 2017.”

Sen. Mark Warner’s office confirmed he remains in Northam’s camp as well. In fact, Perriello’s campaign could not offer a single Virginia Democrat whose mind has been changed, despite the candidate’s early success.

The question is, will it matter for the party either way? Virginia was one of the few swing states that went for Clinton in 2016, and Virginia Democrats believe their base is as fired up as it has ever been for a gubernatorial race.

“What we expect to see in Virginia this fall is a referendum on Trumpcare and the life-threatening decisions that Republicans are forcing Virginians to face,” said Christina Freundlich a spokesperson for the Virginia Democratic Party. “If this bill moves forward and becomes a law, the next governor of Virginia will decide whether they will jack up rates for those with preexisting conditions. We fully expect that the people of the commonwealth to stand up to the Trump-Gillespie agenda and elect another Democratic governor that will keep costs down and protections in place.”

Both Northam and Perriello are uniquely positioned with the future of health care up for debate. While Northam has made affordable health care a central tenant of his campaign, Perriello is touting his vote to pass Obamacare in 2010 — a vote the former congressman claims cost him his seat in the subsequent midterm election.

Meanwhile, Republicans in Virginia have no problem with the Democratic primary candidates’ race to left, especially on health care. They argue Obamacare remains unsustainable and unpopular in Virginia.

“Virginians have consistently told us they want Obamacare repealed and replaced,” said Garren Shipley a Republican National Committee spokesman based in Virginia. “Democrats who embraced Obamacare were crushed in 2010 and again in 2014. There’s a good reason for that. Democrats consistently ignore the horror stories from people who have lost their coverage, who can’t keep their doctors, or who are forced to buy expensive coverage that turns out to be useless. Aetna just announced they’re leaving the Virginia market due to Obamacare. That likely leaves more than 25 counties with just one insurance provider. That’s a fact that Ralph Northam, Tom Perriello, and Terry McAuliffe can’t sweep under the rug.”

The response from both parties shows just how large actions in Washington will continue to loom over state and local races across the country — a dynamic Virginia will confront first, ahead of the crucial midterm congressional elections in 2018.