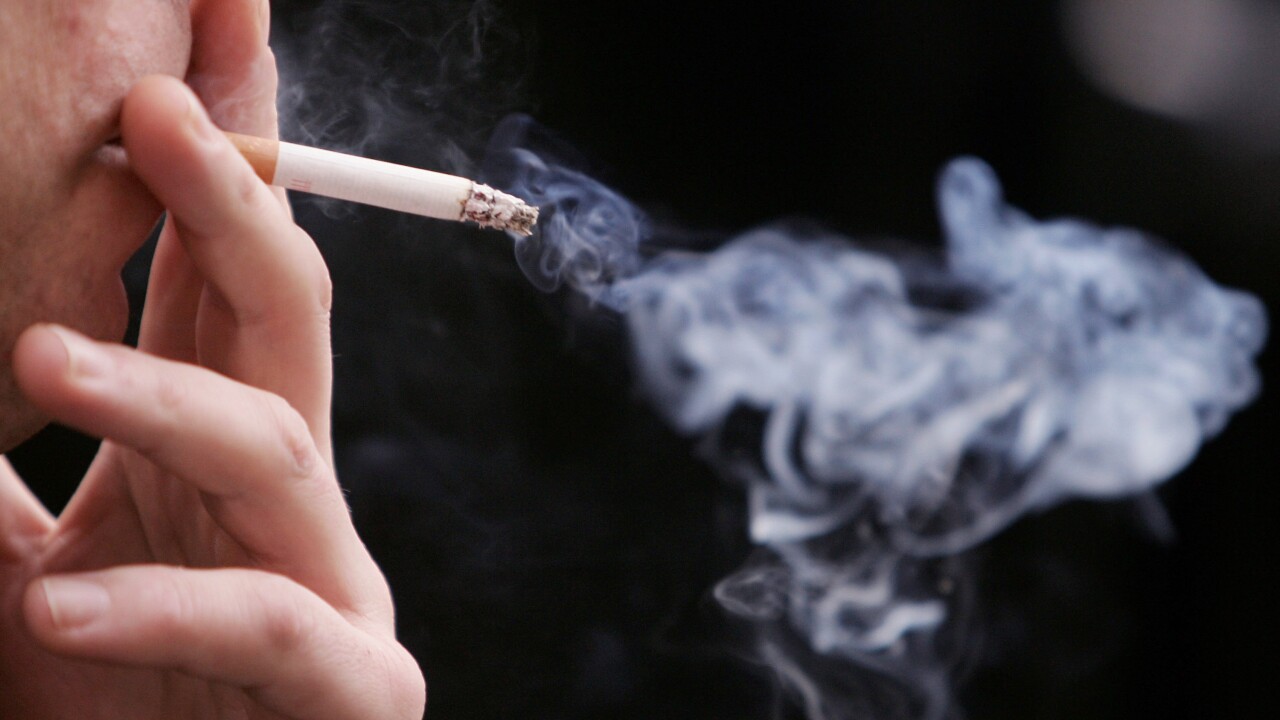 PARIS – JANUARY 31: An unidentified man smokes a cigarette in the street outside his office on January 31, 2007 in Paris, France. France introduces a smoking ban in public places from February 1, 2007. Bars, restaurants, hotels and night clubs will follow from January 1, 2008. (Photo by Pascal Le Segretain/Getty Images)

Can the sight of a greenish-brown color really be enough to deter smokers from reaching for their next pack of cigarettes?

Lawmakers in the UK hope the “world’s ugliest color” will be helpful in lowering smoking rates in their country. In May, previously passed legislation will go into effect requiring all packs of cigarettes to be standardized. Tobaccos products will be stripped of brightly colored branding and replaced with a sludge-like color.

But does the stripped-down, “ugly” packaging really reduce smoking?

Researchers from the UK and Canada summarized several studies that look at the impact of tobacco packaging on consumer attitudes and behavior. Their findings were published today in a Cochrane Review.

Jamie Hartmann-Boyce of the Cochrane Tobacco Addiction Group, co-author of the review, noted that “the evidence we have so far suggests that standardized packaging may reduce smoking prevalence and increase quit attempts.”

Respondents reportedly associated the color with the words “dirty,” “tar” and “death.”

Cigarette and tobacco packaging is not the first time the murky shade has been used in an attempt to turn people away from certain behaviors. According to Angela Wright, a color consultant and author of “The Beginner’s Guide to Colour Psychology,” the technique has been around for decades.

“The company asked him, ‘Can you improve the working area so they don’t have to leave all the time and use the restrooms?’ ” Wright said.

“Birren actually took a different view and painted the restrooms in a color similar to Pantone 448C. And nobody wanted to spend time in the restrooms after that.”

This is just one of the many examples that the “world’s ugliest color” has been used to minimize appeal to control human behavior.

Is Pantone 448C really that bad?

What makes Pantone 448C so off-putting? Wright said she believes it’s the association with human waste.

“It makes perfect sense that smoking packets would use a vile green that looks like bodily fluids and makes people feel slightly nauseated,” she said.

But not everyone agrees.

“I actually quite like the color,” said psychologist Dr. Carolyn Mair of the London College of Fashion, UAL. “It’s an earthy, muted, rich color, very much of nature. But then I also don’t smoke.”

The use of color can play a key role in brand perception among the public.

“Blue is often used in services such as banking and law because of its association with loyalty, honesty and reliability,” Mair said. Red meanwhile “raises the pulse rate … and communicates strength and high energy,” Wright said.

“Football teams who have red uniforms are giving themselves more physical energy but also communicating to the opposite team that they are powerful and strong.”

And purple has connotations with luxury, Mair said.

“Think of Cadbury chocolate (which has a purple logo). At least when it started out, it had the association with a glamorous, smooth, feminine brand,” she added.

In the UK, the Esso petrol logo features red, white and blue — much like many national flags, including those of the United States, Great Britain and France.

“So this combination can result in an instinctive loyalty,” Wright said.

The eye of the beholder

That said, perception also plays a huge role — as seen in Wright’s and Mair’s different responses to Pantone 448C.

“Red could be seen as aggressive and demanding — or as exhilarating and exciting,” Wright said. “Similarly, blue could be perceived as calming and well-thought-through — or excessively bureaucratic and emotionless.”

Wright sees the overwhelming color of our times as a bleak gray.

“Gray is the color of austerity,” Wright said. “And we’re going to keep wearing gray until we feel better financially.”

That is, unless you feel compelled to lighten things with a splash of Pantone 448C.