President Trump considering proposals to break up the 9th Circuit 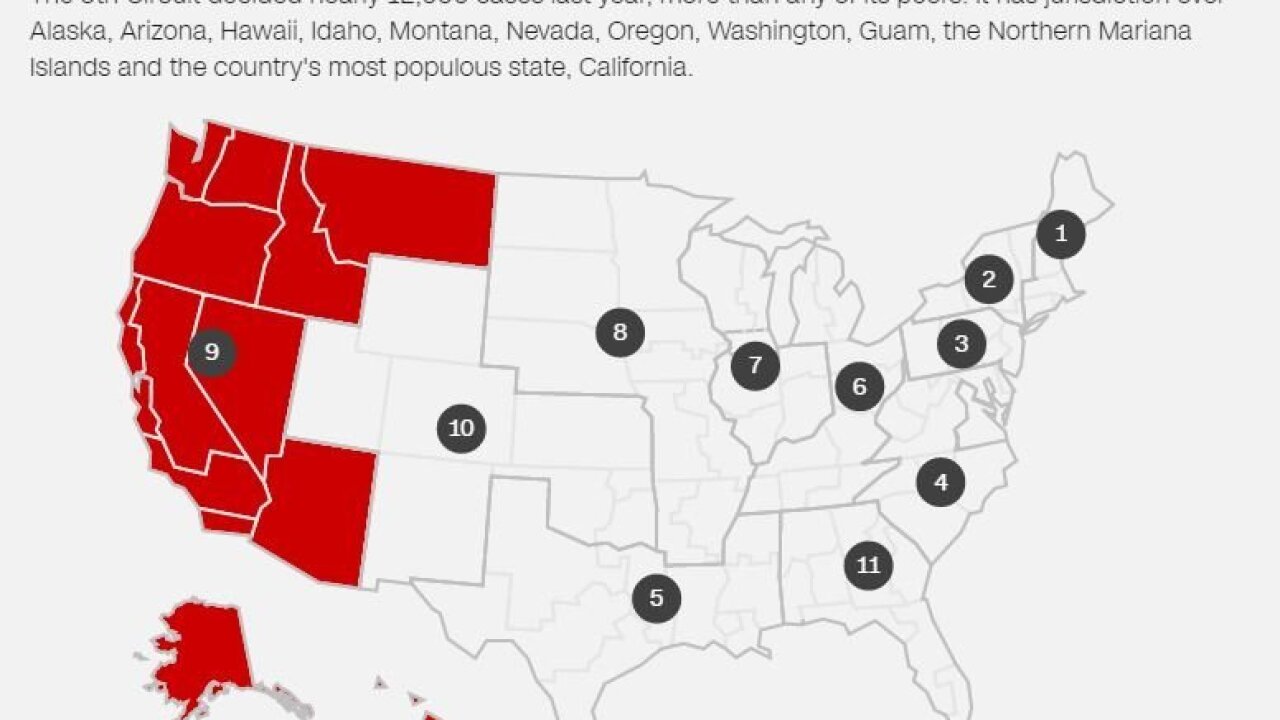 The 9th Circuit decided nearly 12,000 cases last year, more than any of its peers. It has jurisdiction over Alaska, Arizona, Hawaii, Idaho, Montana, Nevada, Oregon, Washington, Guam, the Northern Mariana Islands and the country’s most populous state, California. SOURCE: US Department of Homeland Securit

The 9th Circuit decided nearly 12,000 cases last year, more than any of its peers. It has jurisdiction over Alaska, Arizona, Hawaii, Idaho, Montana, Nevada, Oregon, Washington, Guam, the Northern Mariana Islands and the country’s most populous state, California.
SOURCE: US Department of Homeland Securit

President Donald Trump has “absolutely” considered proposals that would break up the 9th Circuit Court of Appeals — the federal appeals court that ruled against his travel ban — he said Wednesday.

Congress is currently considering legislation that would break up the appellate court currently that covers nine Western states plus Guam. In an interview with the Washington Examiner, Trump accused opponents of his agenda of “judge shopping” by sending cases through the 9th Circuit on appeal.

Attacks on the 9th Circuit are not new.

In a letter to the Senate in February, Cathy A. Catterson, the Circuit and Court of Appeals Executive, she said the first efforts date back to the 77th Congress in 1941.

But the proposed legislation has gotten push back. Judge Alex Kozinski, a Ronald Reagan-appointee who formerly served as the chief judge of the Court, testified against the efforts last month.

In an interview with CNN Wednesday night, Kozinski declined to comment directly on the President’s statement, but he made clear he thinks splitting up the 9th Circuit is a “bad idea.”

“It doesn’t accomplish anything,” he said, and noted that unless California is split into two circuits, there would still be one very large circuit composed of mostly judges from the state. “We would miss out on having judges from other states,” he said. “It’s good to have the perspective of judges who don’t all come from the same region.”

Asked about Trump’s criticism of judges, Kozinski said that attacks on the judiciary “have been a staple of American politics since the birth of the republic,” but he added: “I don’t think it’s a good idea for any litigant to be talking badly about a judge.”

Trump’s comments came hours after he tweeted about the 9th Circuit Wednesday morning. The tweets were launched after a district court judge blocked the administration from enforcing a threat to take away funds from so-called sanctuary cities.

“First the Ninth Circuit rules against the ban & now it hits again,” he tweeted.

Here’s what you need to know about the 9th Circuit and Trump’s other thoughts on the judiciary:

The 9th Circuit is gigantic

It covers nine Western states plus Guam. It has courthouses in Pasadena, Portland, San Francisco and Seattle. In 2016, it had 11,305 filings. There are currently 25 active judges. It was created in 1891 and there have been 100 judges appointed since its creation.

How has it affected Trump’s agenda?

The President suggested that major initiatives — the travel ban and sanctuary cities — have lost out in the 9th Circuit Court of Appeals. He is only partially correct. On the travel ban, a three-judge panel of the 9th Circuit Court of Appeals did rule against the original executive order back in February. It upheld a district court order blocking the ban.

But for the President to criticize the entire circuit, misses the fact that some of the judges on that circuit might have ruled in his favor had they had the opportunity to hear the case. Indeed, five of them said later that they would have voted to review the three-judge panel’s decision.

On sanctuary cities, Tuesday’s ruling blocking the Trump administration from enforcing a threat to take away funds from so-called sanctuary cities was actually issued Judge William H. Orrick, an Obama nominee who sits on the US District Court for the Northern District of California, not the 9th Circuit.

That’s a distinction that matters. “Judge Orrick’s court is a trial court and it follows the precedents of the 9th Circuit and the Supreme Court. He is not on equal footing of a 9th Circuit judge, in fact his court is inferior to the 9th Circuit,” said Jonah Gelbach a professor at the University of Pennsylvania Law School. “If Orrick has made a mistake of law then the government can count on winning an appeal should it choose to file one.”

What is ‘judge shopping’ anyway?

The President also referred to “judge shopping” in his tweets after the sanctuary cities ruling. “They used to call this ‘judge shopping’!” he wrote. The notion of judge shopping translates into a lawyer’s strategy to bring a case in a favorable jurisdiction. It’s as old as the hills. But in this case, it begs the question of where else the jurisdictions at issue, Santa Clara County, the city of San Francisco and others, could have filed their lawsuit.

Indeed, in a related suit brought by Richmond, California, Trump lawyers agreed in court papers that “the venue properly lies within the Northern District of California, because Richmond is a public entity in this judicial district.”

Judge shopping, by the way, is not a one-way street. Indeed, supporters of the Obama administration launched similar accusations when several states challenged Obama’s executive orders on immigration in the US District Court for the Southern District of Texas in Brownsville. Judge Andrew Hanen — whose court is near the border — issued a nationwide injunction. At the time, Attorney General Eric Holder diminished the ruling calling it a “decision by one federal district court judge.”

Is the 9th circuit the most overruled?

Trump pointed out that the 9th Circuit has a “terrible record of being overturned (close to 80%).”

But the reversal rate only includes the tiny fraction of cases the Supreme Court actually chooses to hear.

According to cases compiled by SCOTUSblog for the 2015 term, it does reflect that the court was overturned about 80% of the time. But Gelbach has looked at the issue more closely, noting that that reversal rate reflects only 10 cases. And the same stats show that the 11th Circuit was reversed 100% of the time.

“A stunning rate,” said Gelbach, “but for the fact that there were only three cases considered.”

The stats also reflect that cases that got to the Supreme Court from state courts were reversed more frequently at 85%. Furthermore, SCOTUSblog stats from the 2014 term show that the 9th Circuit was only reversed 63% of the time.

“While the 9th Circuit does seem to consistently have a high reversal rate at the Supreme Court, this is a questionable measure of the 9th Circuit’s performance,” he said. “The Supreme Court hears only a tiny fraction of those cases, maybe a dozen or two, so reversals tell us close to nothing about a circuit’s performance except in a handful of cases.”

Should the 9th Circuit be split up?

Arizona GOP Sen. Jeff Flake and others over time have introduced legislation to split up the 9th Circuit

“A fair and functioning judiciary is one of the pillars of our democracy, but the oversized and overburdened 9th Circuit has Arizonans waiting too long for justice,” said Flake, a member of the Senate Judiciary Committee, last February. “Establishing a new circuit with stronger local, regional, and cultural ties will ease the burden across the West and ensure that the people of Arizona finally get the swift access to the courts they deserve.”

“Dividing a circuit is not something to be done to make judges’ lives easier, or because one might disagree with some of the court’s decisions ” he said. “Proposals that virtually isolate California in a circuit of its own are directly contrary to the idea of regional consistency and the need to have judges from diverse backgrounds at the appellate level.”