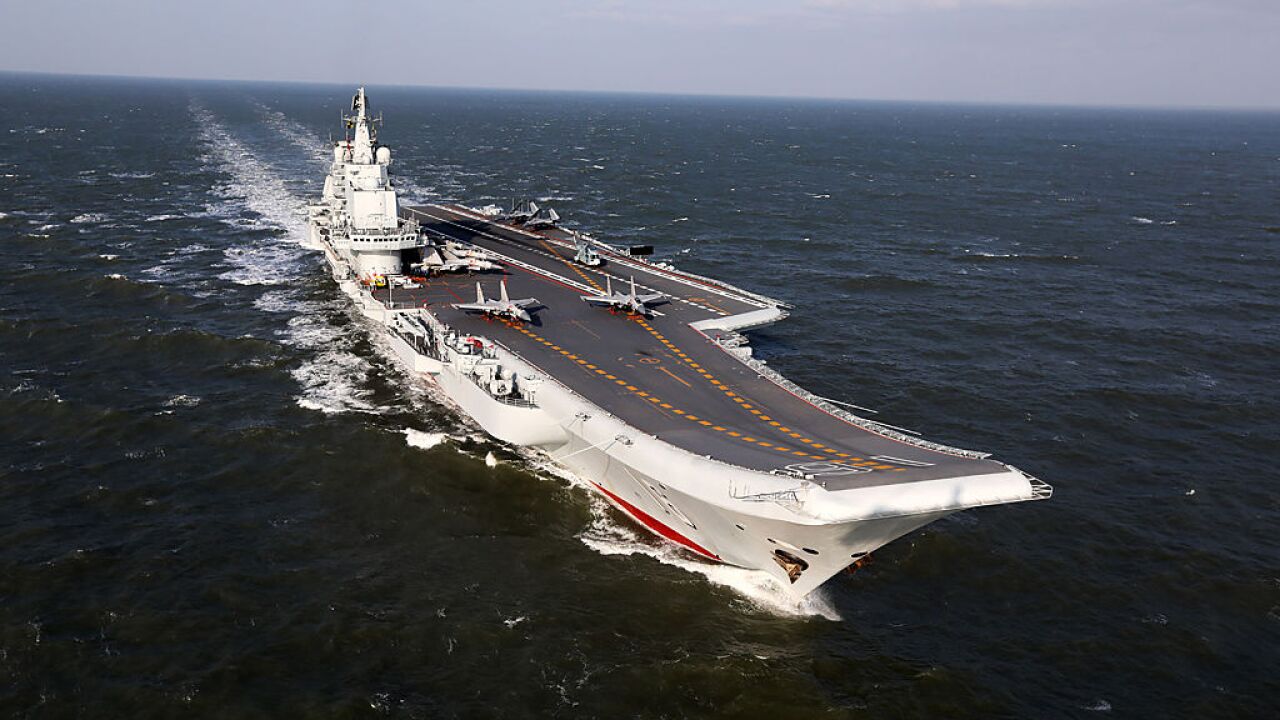 This photo taken on December 24, 2016 shows the Liaoning, China’s only aircraft carrier, sailing during military drills in the Pacific. Taiwan’s defence minister warned on December 27 that enemy threats were growing daily after China’s aircraft carrier and a flotilla of other warships passed south of the island in an exercise as tensions rise. / AFP / STR / China OUT (Photo credit should read STR/AFP/Getty Images)

The first aircraft carrier designed and built in China was launched Wednesday amid streamers and champagne.

The as-yet unnamed vessel is China’s second aircraft carrier. Early on Wednesday morning it was towed from Dalian Shipyard, Liaoning, to a nearby wharf, China’s Ministry of National Defense said.

China first announced the construction of its new carrier in late December 2015. State media said it would be “independently designed in China.”

The new vessel still lags behind its US counterparts technologically, but senior fellow at Sydney’s Lowy Institute Sam Roggeveen told CNN it is likely just a “stepping stone” to China’s next generation of aircraft carriers.

“It’s probably been designed to just get China in the aircraft carrier game, and while this design was just an incremental advance (on the Liaoning), with the next carrier, which could already be under construction, it will be much closer to a US carrier,” he said.

News of the launch comes as tensions mount over North Korea, China’s unruly neighbor and ally. However, the carrier isn’t expected to enter active service until 2020.

A ship is launched when it is first put into the water — but the carrier still requires considerable work to complete it. Once operational, the new carrier will likely be officially commissioned in a separate ceremony.

Construction began in November 2013, and just over three years later the main hull has been completed, as well as a number of the vessel’s primary systems, including power supply.

“Next, the aircraft carrier will debug its system devices and conduct fitting-out as planned, and start mooring tests,” China’s military said in a statement.

China’s first carrier, the Liaoning, was bought from the Ukraine in 1998. After years of refurbishing and outfitting, it was finally put into service in 2012.

This photo taken on December 24, 2016 shows the Liaoning, China’s only aircraft carrier, sailing during military drills in the Pacific.
Taiwan’s defence minister warned on December 27 that enemy threats were growing daily after China’s aircraft carrier and a flotilla of other warships passed south of the island in an exercise as tensions rise. / AFP / STR / China OUT (Photo credit should read STR/AFP/Getty Images)

China has the second largest military budget in the world, estimated at $148 billion after a 7% spending increase announced early in 2017.

Analysts inside the country have previously said China needs at least five to six aircraft carriers. The United States currently has 10 aircraft carriers in service, with another about to be commissioned.

Roggeveen said the new carrier would boost China’s naval capabilities, particularly in the South China Sea, but was based on outdated technology.

“(It still has) what they call the ski jump, which is the 15 degree incline at the front of the ship … to give aircraft more lift,” he said.

“The reason that’s important is that it’s very much a second-best solution for launching aircraft off a carrier. The Americans use what’s called a catapult, which slings aircraft off at much higher speeds.”

The Chinese government’s military buildup has unsettled its neighbors and Washington, particularly as Beijing has taken a more robust stance in territorial disputes in the South China Sea.

According to Yvonne Chiu, an assistant professor at the University of Hong Kong, China’s navy is trying to enhance its ability to operate globally across open oceans.

“China seeks to become a major world power, and one of the hallmarks of such a status is blue-water capability and the ability to project military might globally,” Chiu wrote for CNN in March.

The launch of the new carrier was celebrated with an early-morning ceremony, where the national anthem was played before a bottle of champagne was broken over the vessel’s hull.

The ceremony was attended by Gen. Fan Changlong, vice chairman of the Central Military Commission, who gave a speech.