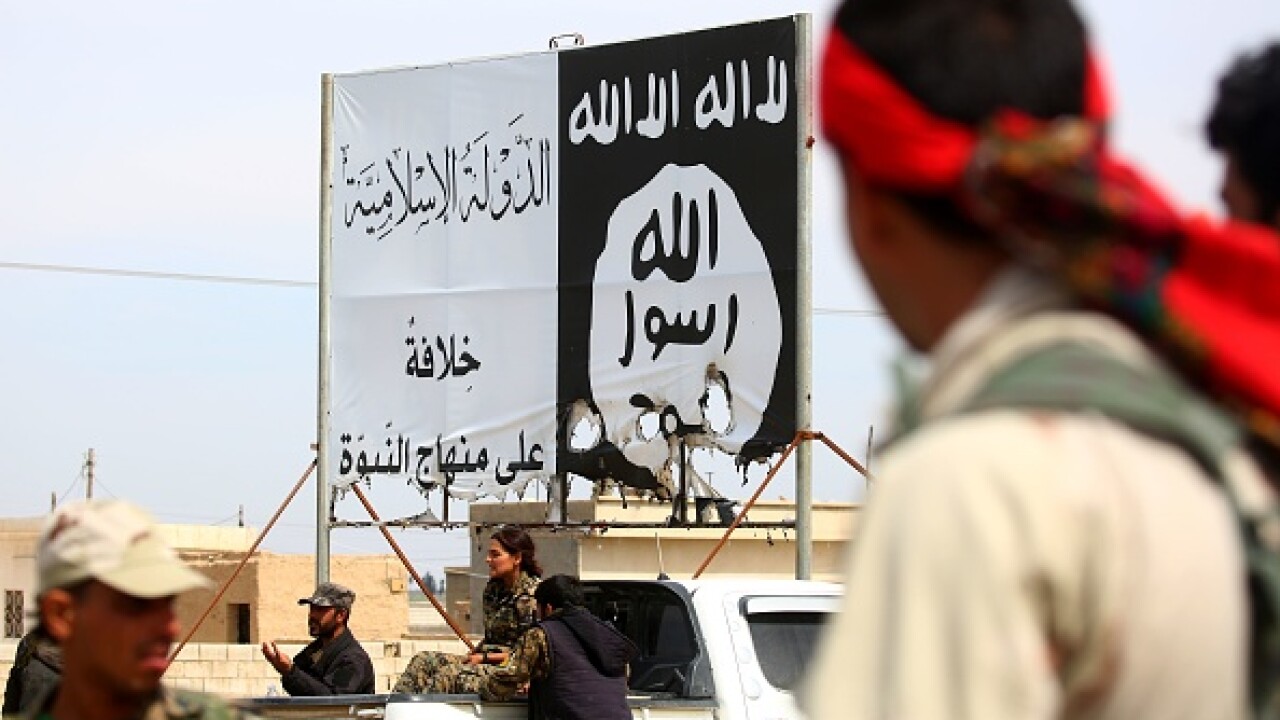 Members of the US-backed Syrian Democratic Forces (SDF), made up of an alliance of Arab and Kurdish fighters, stand under an Islamic State (IS) group banner in the recently recaptured town of Al-Karamah, 26 kms from the IS bastion of Raqa, as they advance to encircle the jihadists, on March 26, 2017. US-backed fighters pressed their offensive near the Islamic State group’s main Syrian bastion Raqa, a day after seizing a military airport that brings them closer to besieging the jihadists. / AFP PHOTO / DELIL SOULEIMAN (Photo credit should read DELIL SOULEIMAN/AFP/Getty Images)

The Trump administration’s deployment of additional US troops to Iraq and Syria — and the prospect of increased operations in Yemen and elsewhere in the Middle East — will ramp up pressure on Congress to formally authorize the war against ISIS, according to lawmakers pushing for action on Capitol Hill.

But a vote on the war threatens to expose the divisions over the US military campaign between hawks and doves that have lingered since the Obama administration began fighting ISIS in 2014.

On the one hand, congressional approval for the ISIS war could be a public affirmation of President Donald Trump’s plans to accelerate the military campaign and potentially give the commander in chief a freer hand to ramp up troop deployments across the Middle East.

On the other, anti-war lawmakers could press for restrictions on troop numbers and their theater of battle, imposing limits that don’t exist under the current post-9/11 authorization for fighting al Qaeda that successive administrations have until now relied on to fight ISIS as well.

The bipartisan group of lawmakers that for years has tried to force Congress to authorize the war against ISIS, arguing Congress is giving up its constitutional authority to declare war, says Trump’s desire to accelerate the ISIS campaign stresses the need for a formal vote on the war.

“I haven’t thought that this war against ISIS is constitutionally authorized from the beginning,” said Democratic Connecticut Sen. Chris Murphy. “Now that we’re talking about a potential massive increase in troop presence, we need to put some boundaries around it congressionally.”

The White House has yet to weigh in directly on the issue, but like the Obama administration, the Trump administration says it has the legal authority to conduct its ISIS campaign even without congressional approval.

But one top administration official signaled the administration also sees a benefit to a new ISIS war authorization — albeit for different reasons than many Democratic advocates.

Defense Secretary James Mattis told a Senate panel last week that he wants them to authorize the war against ISIS because, “I think it would be a statement of the American people’s resolve if you did so.”

“I thought the same thing for the last several years, I might add, and have not understood why the Congress has not come forward with this, at least the debate,” he added.

Congress has been reluctant to debate — let alone vote on — a war authorization, due to an inability to find consensus as well as political concerns that a vote could be used against them later on, as Hillary Clinton’s vote in favor of the Iraq War was.

“I think Congress should weigh in and say what the support should look like, but the devil is in the details” of any authorization for use of military force, Washington Rep. Adam Smith, the top Democrat on the House Armed Services Committee, told CNN. “I don’t want the AUMF to be a blank check to the President to do anything he wants, anywhere, anytime, for any reason.”

Mattis delivered a plan to Trump to accelerate that campaign, and additional US troops in recent days have deployed to Iraq and Syria, including an air assault as part of a major offensive led by US-backed fighters to retake a dam near Raqqa, Syria. Soldiers from the 82nd Airborne Division were deploying to Iraq in the “low hundreds” this week, according to a US defense official.

The Trump administration is also looking at stepping up the US military’s involvement in Yemen’s civil war, and has loosened the rules for counter-terrorism missions in parts of the country.

Democratic Sen. Tim Kaine of Virginia and Republican Sen. Jeff Flake of Arizona tried to team up to pass a war authorization during the Obama administration, and they told CNN they’re now reworking a bill that can get support from both parties.

“We had a bill in for a couple of years nobody was interested in — we tried to wordsmith differences between Democrats and Republicans — so we’re actually exploring some different ways of coming at it,” Kaine said. “It’s the beginning of an administration, a new plan on the table might be time to look at it, and I think Gen. Mattis helps us move in that direction.”

Other Democrats predicted Trump could force Congress’ hand to pass a war authorization if he were to dive too far into military adventurism.

“I’ll tell you what will make it happen, is if the President takes some kind of aggressive military action that’s unexpected and that is not envisioned as just a continuation of the Global War on Terror,” Missouri Democrat Claire McCaskill told CNN.

But for Republicans, a “robust” war authorization is what’s needed so the commander in chief’s hands are not tied.

“The draft that the Obama administration put out … it was very, very limiting, extremely limiting,” said Alaska Sen. Dan Sullivan. “It might have a better chance now that we have a White House that probably will have a different outlook.”

Mattis said at last week’s hearing that he does not support limitations on time or geography in a war authorization.

“Due to the nature of this enemy’s threat, that would only work to help the enemy,” Mattis said in response to a question from Sen. Lindsey Graham, a South Carolina Republican, about geographic restrictions.

Senate Foreign Relations Chairman Bob Corker, whose committee would handle legislation to vote on the war, said he wanted the administration to articulate its ISIS strategy first, and then Congress could consider passing an AUMF.

“We’ve said from day one, even back under the Obama days, we’d like for the administration to lay out a strategy. That never really happened,” the Tennessee Republican said. “I do think these guys are formulating one and we’ll see where it goes.”