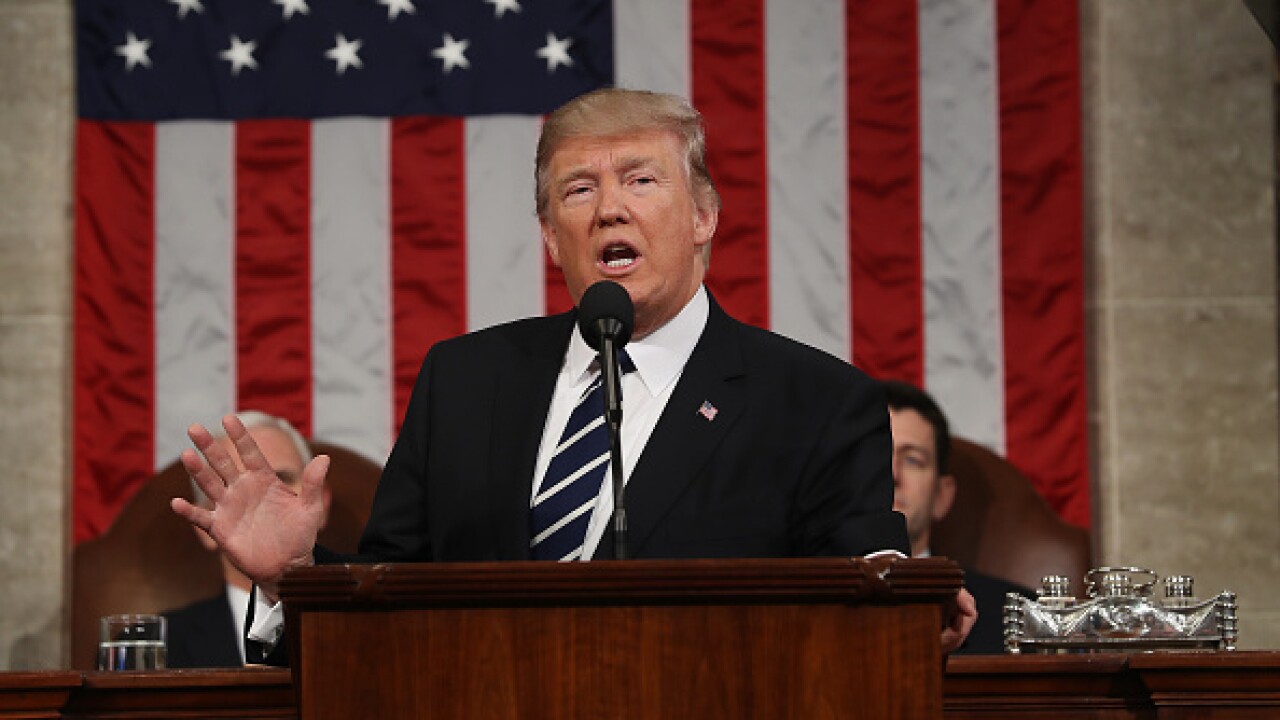 WASHINGTON, DC – FEBRUARY 28: (AFP OUT) U.S. President Donald Trump addresses a joint session of the U.S. Congress on February 28, 2017 in the House chamber of the U.S. Capitol in Washington, DC. Trump’s first address to Congress is expected to focus on national security, tax and regulatory reform, the economy, and healthcare. (Photo by Jim Lo Scalzo – Pool/Getty Images)

The Trump administration has given Congress a lengthy list of ways to cut $18 billion from the federal budget this year in an effort to offset its request for additional defense spending.

The document, which follows the administration’s call for a $30 billion boost to defense spending and some funds for border security, including the wall, is “a list of suggested spending cuts” for this fiscal year, according to a Republican aide on Capitol Hill.

The recommendations, released earlier this month, are meeting “mixed reactions” among Republicans on Capitol Hill and Democrats are unlikely to support them, making it unlikely the cuts will be enacted as currently proposed.

The largest cuts are proposed to programs related to education, labor and health, according to the document, which was reviewed by CNN and bears the stamp of the White House’s Office of Management and Budget.

Many of the proposed cuts are to grant programs, meaning that if enacted, states, universities and non-profit organizations could find themselves seeking additional funds on their own or cutting programs to make up the difference.

In some cases, the document notes the cuts align with similar cuts in President Donald Trump’s recent budget proposal for the next fiscal year, 2018.

The proposal calls for cuts to service programs: $439 million from AmeriCorps, $66 million from a related program called Senior Corps and $434 million from the Senior Community Service Employment Program.

“It is not a core function of the federal government to promote volunteerism, and therefore, these programs should be eliminated,” the Trump administration wrote. “To the extent these activities have value, they should be supported by the private and nonprofit sectors.”

It calls for cutting the Centers for Disease Control and Prevention budget by $314 million either by reducing or eliminating spending on various disease research and prevention programs.

Another $292 million cut would hit the President’s Emergency Plan for AIDS Relief, or PEPFAR, a key initiative of former President George W. Bush that continued under President Barack Obama.

Trump appeared to spare PEPFAR from his 2018 budget, calling for “sufficient resources to maintain current commitments and all current patient levels.” The 2017 document, however, says the program would be required to “begin slowing the rate of new patients on treatment.”

Nearly $3 billion would be cut from education programs, mostly from a teacher-oriented grant program ($1.2 billion) and Pell Grants that help low-income individuals pay for college. The Pell cut would reduce surpluses in the program’s account, and the administration said the cut “would still leave the program on solid footing.”

More than $1.6 billion would be cut from grants and other programs run by the Housing and Urban Development department.

Another $1 billion cut could hit the US Agency for International Development.