Only on 3: Suffolk mother says school district lost her son for 2+ hours, she wants answers 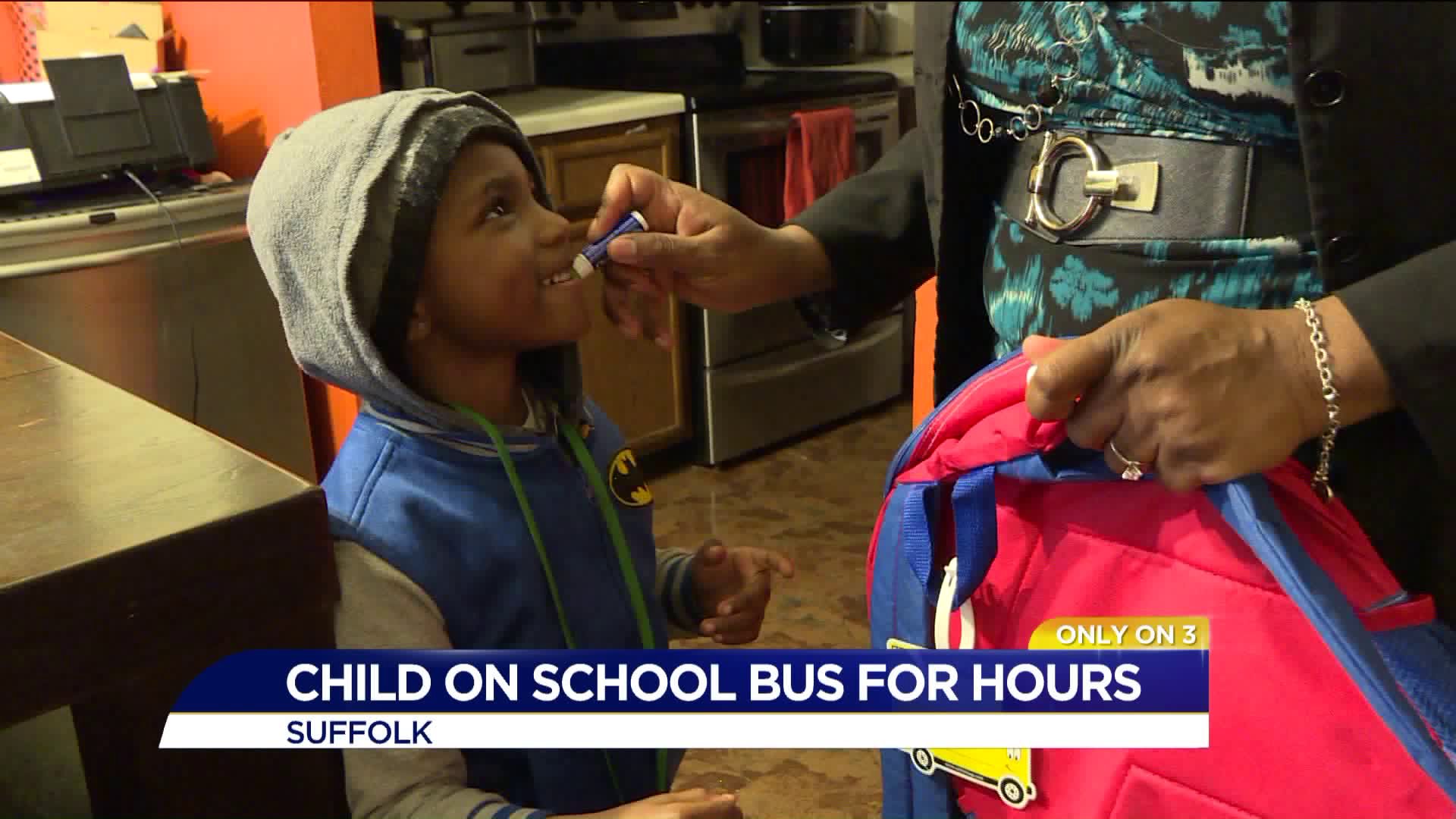 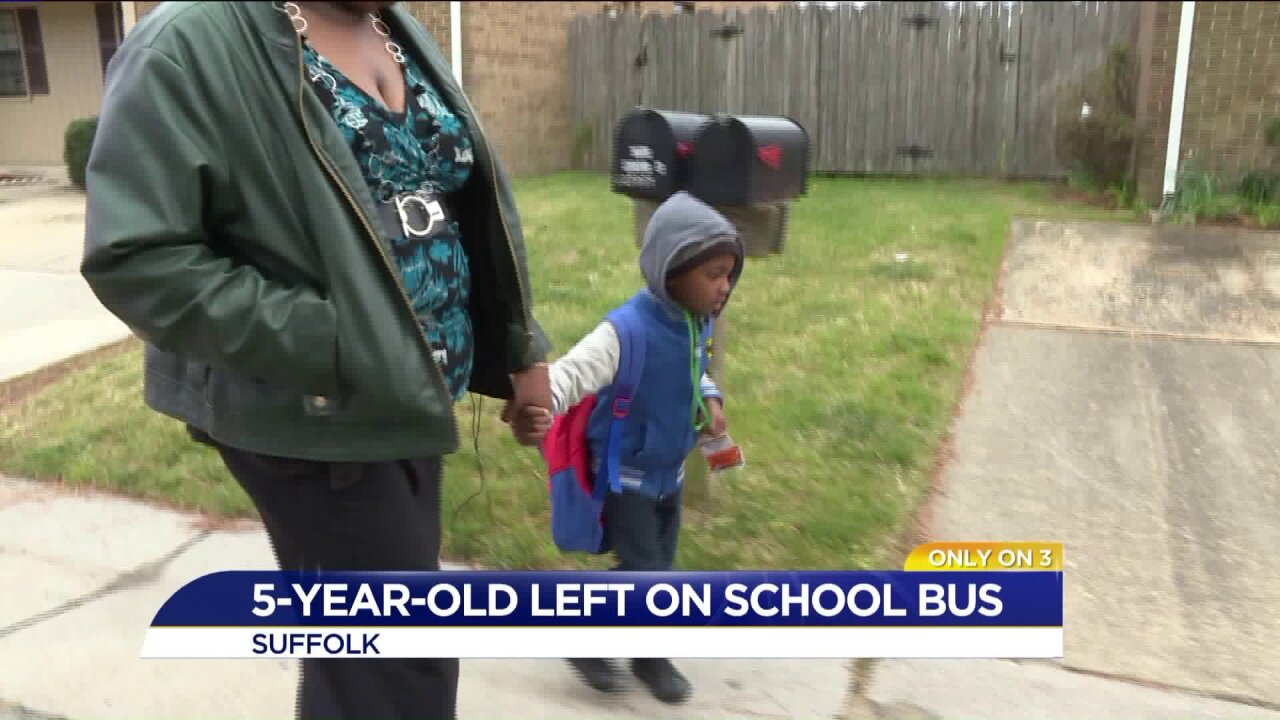 SUFFOLK, Va. – Claims of low pay for teachers and bus drivers and a shortage of school staff have been affecting school districts across Hampton Roads.

But the public school budget crisis is not just affecting school board members and their staff. It is also affecting students.

Blake Riddick waits for the school bus with his mom, Keeva.

Blake Riddick is a 5-year-old preschooler at Driver Elementary in Suffolk. Every day, Blake takes the bus to and from school.

“Any mother is going to sit here and think, ‘Oh god. Did the bus get in an accident? There have been a lot of those in the news,’” said Blake’s mom, Keeva Riddick.

She says parents are usually sent a message if school buses are running behind. In fact, Riddick got a call for a late bus in the middle of our interview.

Keeva Riddick claims the Suffolk school system lost her son for over two hours on his way from school.

However, on March 8, school officials confirmed Riddick never got a late bus message, and two weeks later, they still cannot explain why.

Riddick says she called the school, who gave her the number for bus dispatchers. She told News 3 she called four times in 90 minutes, and each time, dispatchers told her Blake was only ten to 15 minutes away.

Riddick says dispatchers refused to call the bus driver, instead relying on a GPS tracking system to see where the bus was.

Fed up with ‘runaround’ answers, Riddick decided to go look for her son, and told her after school caretaker to stay at the bus stop just in case.

At 6:10 p.m., Riddick says she found the bus circling the neighborhood.

“As soon as I get to the door, it opens up and there is a new bus driver I’ve never seen him before,” said Riddick. “He’s an older gentleman, and he looked just as scared as my son did.”

Blake holds his mom's hand on their way to the bus stop.

Meanwhile Blake only wanted one thing: “I wanted mommy.”

The next day, Riddick showed up to a school board meeting.

“As far as I’m concerned he could be on a joyride around the corner, somewhere being abused, or whatever,” Riddick can be heard saying in the recorded video.

She demanded action from school board officials.

Keeva Riddick told school board members about the incident at a recent budget hearing.

“So one of you guys will call me tomorrow with an answer?” Riddick asked the board. “A better policy? Maybe the drivers having phones or something like that, so I can know where my son is at all times?”

Riddick says she had no idea about the school budget problems in Suffolk until she showed up to the meeting, but she quickly realized her son had become a casualty of the budget crisis.

Now, Riddick is asking officials to go the extra mile to make this right, so bus drivers and her son won’t have to.

“I’m not going to allow that to happen again. Do not put me in this position to scare me or scare him because of not properly taking care of the work schedule.”

We reached out to school officials about the incident. Their full statement is below.

"Suffolk Public Schools is committed to provide (sic) a safe ride for all students, and to communicate with all parents.

I'm assuming you contacted this parent because she spoke at the March 9 budget public hearing.  Our transportation director talked with her the next morning to figure out what happened.

The first part of the issue was a glitch in our automated calling system (School Messenger) which sends out phone calls and text messages once dispatch knows a bus will be late.  While the mother had received such calls in the past, she did not receive one on March 8.  We contacted the company, but they could not explain the glitch.  Her phone numbers were correct and the child's bus route was correct in the system.  We hope a reboot of the connectivity will alleviate future glitches.

On this day, that bus had a substitute driver and it was also a double run, which means that the bus takes one route of students home, then returns to school to pick up a second load of students.  This boy was part of the second load, which left school about 4:45 p.m.

Her second concern was the response provided by transportation dispatchers. She was not assured because at different calls to dispatch, she was given different answers on how long it would be before the bus arrived to the boy's stop.

According to the Driver Elementary School principal, this parent did not call the school.  The principal had received other parent calls about this same late bus.  The principal and the transportation staff knew exactly where the bus was located because all buses have real-time GPS tracking.  Through GPS, we know that this substitute driver was never "lost."  (Encourage viewers to call the school who have a direct line to transportation and can often find out GPS location much quicker than a parent trying to get through to the dispatch office where phone lines are limited and often can't handle the call-load.)

Because it was a second load (double run), the boy's bus did not leave Driver Elementary until 4:45 p.m.  That is what the late bus call told parents.  The extended length of getting this child home was complicated because of rush-hour traffic on Nansemond Parkway, Shoulders Hill Road, and Bridge Road (Route 17) ... which if the bus had left the school at normal dismissal (3:35 p.m.), that amount of traffic would not have been encountered.

Most of the students on this particular bus are Early Start students, our 4-year-old preschool program, who live outside of the regular Driver Elementary zone.  It is required that all Early Start students be dropped off at bus stops hand-to-hand with a parent.  If a parent is not at the bus stop, the child cannot get off the bus.  When any parent is driving around looking for a child, a bus might have tried to drop a student off at the bus stop but there was no parent to receive him or her.  Some drivers will finish the run and then try the stop again to see if the parent is there to receive the child.  If not, the child is brought back to school.

Having a substitute driver might also slow the drop-off timeline because the driver is not familiar with students by name, and must compare their bus stops to a printout. Most of these Early Start students are very soft-spoken when they tell a driver their names. A possible option would be providing a name card to young students when a substitute driver is taking them home.

To provide better communication, parents will soon be able to follow their child's bus on GPS.  Our transportation department is working to provide a better communication tool for parents, and hope by the first day of school in September, that parents will be able to log into a parent portal website and see the exact GPS location of their child's bus.  We expect this enhancement to greatly improve parents' confidence in our transportation program."

Suffolk teachers threaten to quit after Superintendent gets 13 percent raise