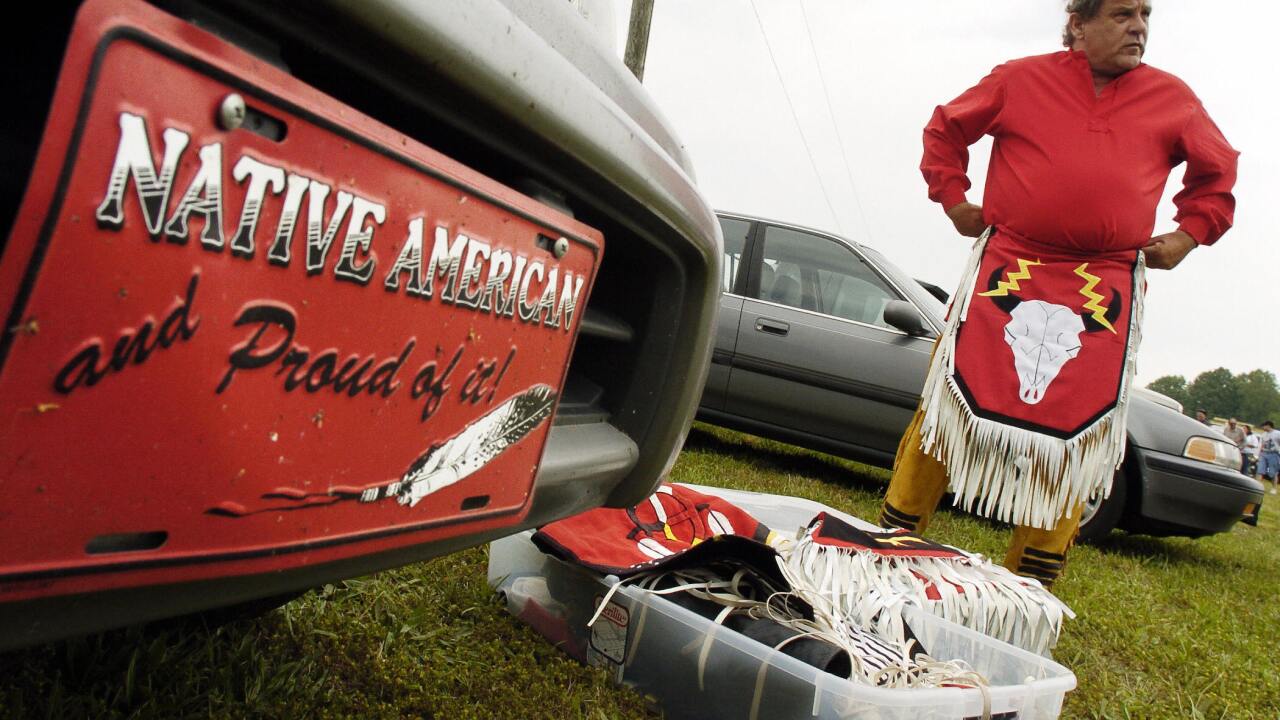 KING WILLIAM, UNITED STATES: O.T. Matthews puts on a breechcloth with a design of the Lakota Native American tribe next to his truck with a “Native American and Proud of It!” license plate as he prepares for the Upper Mattaponi Indian Tribe Pow-Wow 28 May, 2005 in King William, Virginia. The annual event is a historical and cultural celebration of Native American heritage and gathers people and dancers from the region. Dancers at Pow-Wows across North America wear traditional regalia specific to their tribe or a mix from various tribes while drummers and singers chant traditional songs. AFP PHOTO/Stan HONDA (Photo credit should read STAN HONDA/AFP/Getty Images)

“The Thomasina E. Jordan Indian Tribes of Virginia Federal Recognition Act of 2017 would grant the Chickahominy, the Eastern Chickahominy, the Upper Mattaponi, the Rappahannock, the Monacan and the Nansemond tribes legal standing and status in direct relationships with the U.S. government,” said a spokesperson from Kaine’s office.

The legislation was introduced on the 400th anniversary of Pocahontas’ burial.

“Four hundred years after the death of Pocahontas, our country continues to do a disservice to her descendants by failing to recognize the major role Virginia’s tribes have played in American history and the fabric of our nation,” said the Senators. “These six tribes have treaties that predated the United States, but because of this historical quirk and the systematic destruction of their records, they have been denied federal recognition and the services that come along with it. Congress can fix this injustice by passing our bill and granting these tribes the federal recognition they deserve.”

Federal recognition would allow Virginia’s tribes to compete for educational programs and other grants open to federally recognized tribes. It would also allow tribes to send the remains of their ancestors in a respectful manner. Most of the remains are in the Smithsonian and without federal status there is no mandate to return the remains.

Additionally, federal recognition would provide affordable health care services for elder tribe members who have been unable to access care.

Kaine and Warner introduced two previous versions of the bill in Congress. Both passed out of the Senate Committee on Indian Affairs but never were brought to the floor for a vote.