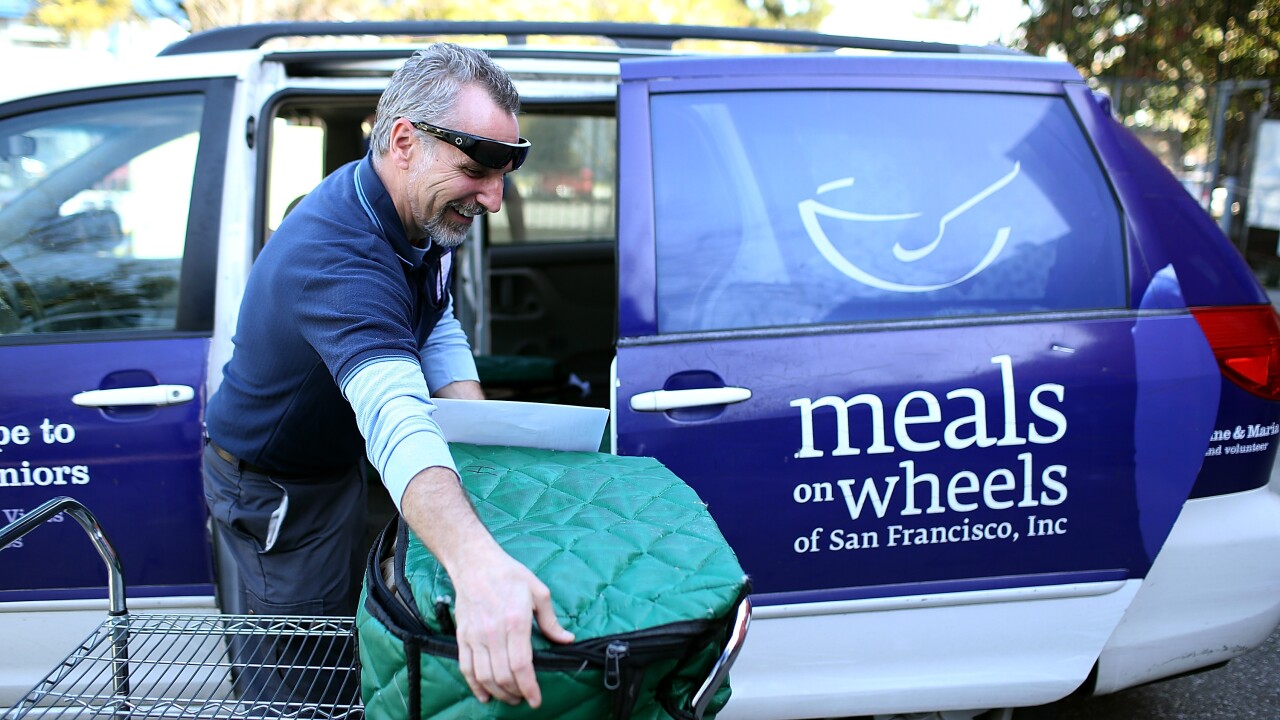 SAN FRANCISCO, CA – FEBRUARY 27: Meals On Wheels of San Francisco driver Jim Fleming loads meals into a van before making deliveries on February 27, 2013 in San Francisco, California. Programs for the poor like Meals On Wheels, which delivers meals to homebound seniors, could be affected if $85 billion in federal spending cuts come down due to sequestration. (Photo by Justin Sullivan/Getty Images)

Meals on Wheels received 50 times the typical amount of daily donations on Thursday after the White House proposed cuts to some of the program’s sources of funding, a spokesperson for the group said.

Volunteer sign-ups also jumped, increasing by 500%, according to Jenny Bertolette, a spokeswoman for Meals on Wheels America.

Bertolette said the support to the national Meals on Wheels office has been “amazing” and “very overwhelming.”

Several local Meals on Wheels organizations said they had received similar support. Metro Meals on Wheels, which covers Minneapolis and St. Paul, said the group received about 40 donations in the past 24 hours, well over the usual average of three or four donations a day.

“The good news that it has rallied folks around the cause and reminded folks that they can’t really take these kinds of services for granted,” said Patrick Rowan, executive director of Metro Meals on Wheels. “It’s reassuring that the public has stepped up.”

Similarly, Ellen Horwitz of Meals on Wheels of West Los Angeles said there’s been an “abundance of people calling in the last two days saying, ‘Can we help?'”

The outpouring of support comes shortly after the White House’s budget blueprint suggested eliminating the $3 billion Community Development Block Grant program and cutting funding for the Department of Health and Human Services.

Those programs constitute sizable funding for Meals on Wheels, a nonprofit with more than 5,000 local branches that provides hot meals and support for about 2.4 million senior citizens.

Meals on Wheels is responding quickly, by actively seeking donations and volunteers. Visitors to their website now see a pop-up ad featuring an elderly man in a U.S. Army veteran hat.

“Seniors in your communities need Meals on Wheels. And we need you. Federal funding is at risk. Help us defend these vital services today,” the ad reads. “Give now.”

How cuts could affect Meals on Wheels

The Meals on Wheels’ national office, which supports and advocates for the local branches, receives just 3% of its funding from government grants, and largely relies on corporate sponsors, foundation grants, and contributions.

But the 5,000 local Meals on Wheels offices, which do the layman’s work of providing the meals and services to seniors, receive a significant chunk of their money from funding that could be on the chopping block. The exact amount varies depending on the local office, Bertolette said.

For one branch outside of Detroit, the community block grants make up about 30% of their budget, Bertolette said. If that funding source is cut, they would have to turn seniors away or cut down from two meals per day to just one, she said.

In another example, the city government of San Jose, California, said it received about $2.5 million in federal funding under the Community Development Block Grant program to address the homeless and other local needs. A total of $100,650 of that funding went to Meals on Wheels.

The Southern Maine Agency on Aging, which provides meals to elderly in Maine’s Cumberland and York counties, said it would be “shortsighted” to cut that funding.

“We’ve been flat-funded for many years and really rely on funding and donations to serve the people,” said Katlyn Blackstone, Southern Maine Agency on Aging’s chief program officer. “To think of a cut, any amount of cut is really dangerous.”

In addition to the proposed Community Block Grant Program cuts, the Department of Health and Human Services could also see a 16.2% decrease in funding. While the budget does not say which programs under HHS would be affected by that cut, the department oversees the Older Americans Act, the 1972 law that makes up the primary source of funding for Meals on Wheels.

Bertolette says there would be a “more sweeping negative impact” on Meals on Wheels if that funding shrinks.

“This is gonna take a huge effort on the Hill in the next weeks and months to really advocate for our program,” Bertolette said. “This budget would add insult to injury.”

White House officials question the effectiveness of programs such as Meals on Wheels.

“The federal government has spent over $150 billion on this block grant since its inception in 1974, but the program is not well-targeted to the poorest populations and has not demonstrated results,” the authors of the budget blueprint say.

Mike Mulvaney, director of Office of Management and Budget, defended the budget when asked if it was “hard-hearted” to those in need.

“I think it’s probably one of the most compassionate things we can do,” he said. “I think it’s fairly compassionate to go to [taxpayers] and say, look we’re not gonna ask you for your hard-earned money anymore … unless we can guarantee to you that that money is going to be used in a proper function.”

But Meals on Wheels officials pushed back on that, saying the program saved taxpayers millions of dollars. Bertolette and Ellie Hollander, CEO and president of Meals on Wheels, said that the program keeps seniors healthy, prevents falls, and keeps them out of the expensive health care system.

And some Republicans agree.

“Meals on Wheels is a wonderful program,” he said. “It is one I would never vote to cut even one dollar.”