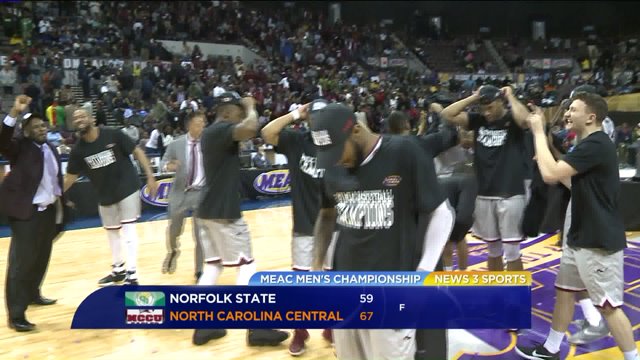 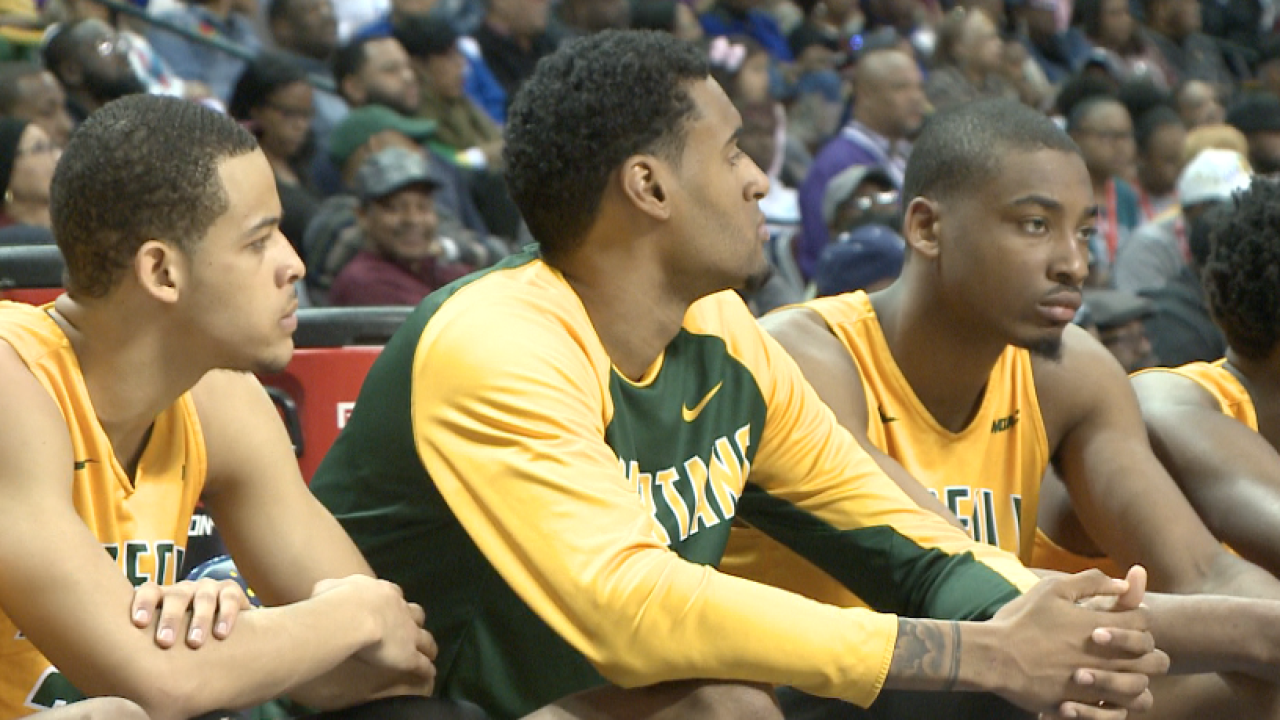 The Spartans on the bench during the MEAC Championship.

NORFOLK, Va. - A cold shooting streak that lasted more than 11 minutes ultimately doomed the No. 2 seed Norfolk State men's basketball team on Saturday afternoon at Scope Arena. Top seed North Carolina Central used a 19-0 run in the second half to pull away from the Spartans in a 67-59 win in the MEAC Championship game.

It was a nip-and-tuck first half, in which neither team led by more than six. It stayed that way in the second period, at least until NSU struggled mightily on offense. The Spartans were making their third-ever title game appearance and were searching for their second MEAC title ever.

They were in good position to claim the crown, taking a three-point lead into the locker room at 38-35 against a normally stout defensive Eagle unit. But with N.C. Central down 46-43 with 14:33 on the clock, some tough Eagle defense combined with missed opportunities by NSU on offense completely turned the tide. The Spartans missed 14 straight shots and committed five turnovers during that 11-minute span.

By the time it was done, NSU trailed 62-46. Junior Bryan Gellineau hit a foul line jumper with 3:20 left to finally end the drought. Senior Kerwin Okoro and junior Zaynah Robinson added 3-pointers after that, and Robinson's trey with time ticking down got the score to its final margin.

Robinson finished with 18 points, six rebounds and four assists to lead NSU, which fell to 17-16 overall. Okoro was the only other player in double figures for the Spartans with 12. Norfolk State made just 23-of-65 for the game (35.4 percent), including 28 percent in the second half.

The Spartans were also hurt by a 20-7 discrepancy in fouls not in their favor. It resulted in an 18-of-27 night for the Eagles from the foul line compared to a 6-of-6 effort for NSU. North Carolina Central had 14 attempts in the second half to zero for the Norfolk State.

The Eagles won their second MEAC title in four years while improving to 25-8.
They took the lead to start the game, building a 10-4 advantage after five minutes of action. Down by five a little more than midway through the first period, NSU came back to take the lead on an 8-1 run. Robinson started to heat up for the Spartans after Patrick Cole had scored nine of 11 points for the Eagles during that midway point.

Okoro put NSU ahead by two at 8:06 with a three-point play, and Robinson scored six straight for the Spartans to keep them ahead. Okoro then made a pair of 3-pointers within a minute and a half to stretch the NSU lead to 34-29 with three minutes before the intermission.

Norfolk State went into the half up 38-35 after junior Stavian Allen's putback with less than a minute on the clock.

The Eagles, though, scored seven of the first nine points of the second half. The lead changed hands three times, with the third leading to N.C. Central's backbreaking big run.

Sophomore Alex Long and junior Kyle Williams each had eight points for the Spartans. Williams also tallied a career-high 10 rebounds to help them finish with a 44-37 edge on the glass.

NSU committed 17 turnovers to 10 for the Eagles, which led to a 17-8 advantage in points off turnovers for N.C. Central.

The Spartans will find out later if they will compete in a postseason tournament. NSU has participated in the CollegeInsider.com Tournament each of the last three years.