Jewish cemetery in Philadelphia vandalized; 2nd incident in a week 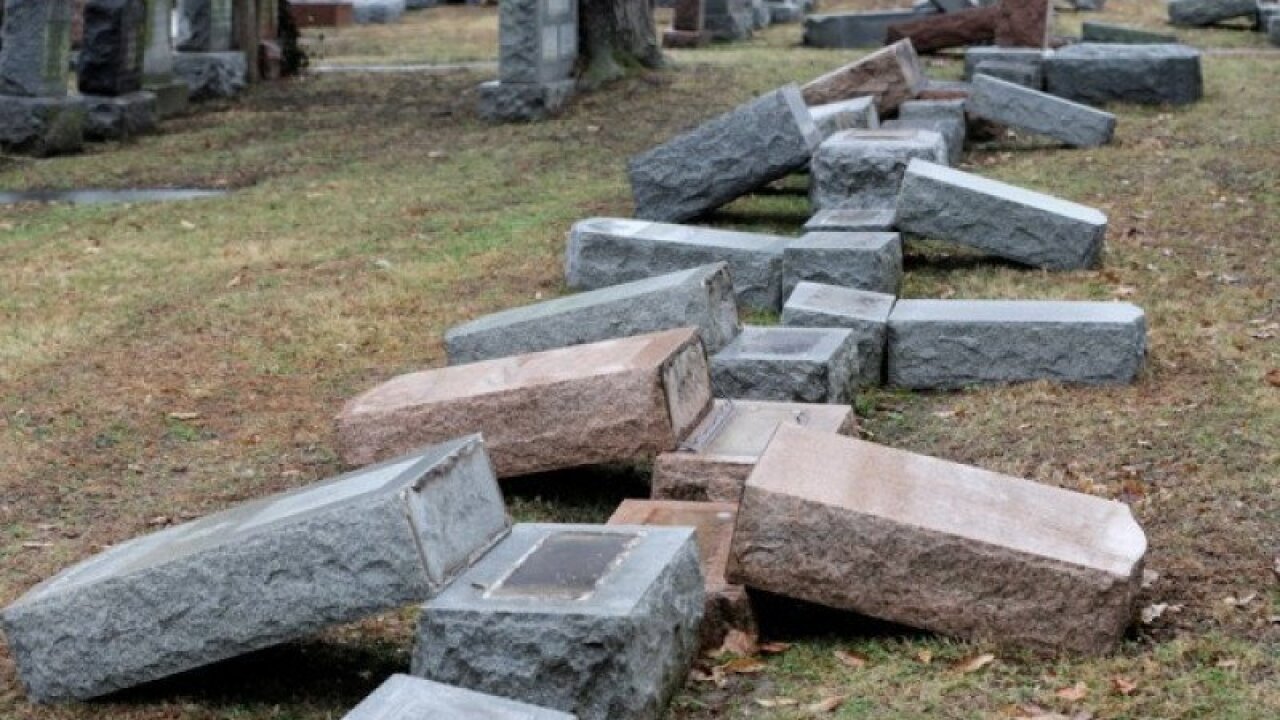 Police in Philadelphia are trying to determine who vandalized a Jewish cemetery over the weekend.

Between 75 and 100 tombstones were overturned and damaged Saturday night at the Mt. Carmel Cemetery in the Wissinoming neighborhood. The incident is being classified as institutional vandalism, but investigators have not established a motive, said Det. Jim McReynolds of the police department’s Northeast Detectives Division.

Cemeteries are located on each corner of the intersection, but no vandalism was found at the three Christian cemeteries, he said.

“As far as we know it’s limited to the Jewish cemetery,” he said.

The estimate of 75-100 damaged tombstones was conservative and may grow, he said.

Rabbi Shawn Zevit of Mishkan Shalom Synagogue said he and a member of his congregation went to the cemetery and counted “a few hundred” headstones knocked over.

While not providing an exact number, he said “the sheer scale is quite something.”

Two weeks ago, about a dozen headstones were damaged at a Catholic cemetery in Philadelphia, the Philadelphia mayor’s spokeswoman Lauren Hitt told CNN.

The vandalism at the Holy Redeemer Catholic Cemetery didn’t appear to target a specific group of people, and the investigation into that case is ongoing, Hitt said.

The Catholic cemetery is about two miles away from the Jewish cemetery.

The vandalism at the Jewish cemetery was especially worrisome because it comes less than a week after a similar incident at a Jewish cemetery in St. Louis, said Nancy Baron-Baer, the Anti-Defamation League’s regional director for the Eastern Pennsylvania, South Jersey and Delaware region.

“One stone in one cemetery being desecrated is one stone too many. We are talking about hundreds within a week,” she said.

The ADL is offering a $10,000 reward for information leading to the arrest and conviction of those responsible, she said.

The Fraternal Order of Police Lodge No. 5 offered a $3,000 reward for the same purpose.

Naomi Adler, CEO of the Jewish Federation of Philadelphia, said the Mt. Carmel cemetery dated to around 1890. Once the damage is assessed, the federation will organize a cleanup effort, she added.

“Maybe we’ll never know if this was an anti-Semitic act, but it’s a desecration of a holy site,” Adler said.

After the Jewish cemetery in St. Louis was vandalized, Muslim-American activists Linda Sarsour and Tarek El-Messidi launched a fund-raising effort to help pay for the toppled headstones to be repaired.

El-Messidi wrote on Facebook that some of the extra funds would go toward the Philadelphia cemetery, and he visited Mt. Carmel on Sunday to help in the recovery efforts.

“Seeing this in person was very devastating,” El-Messidi wrote on Facebook. “Many people there were embracing one another in tears due to what they saw.”

“I want to ask all Muslims to reach out to your Jewish brothers and sisters and stand together against this bigotry,” he said.

Members of the Philadelphia branch of Ahmadiyya Muslim Community USA, an American-Muslim organization, also visited the cemetery and helped in the cleanup efforts, according to national spokesman Qasim Rashid.

Salaam Bhatti, another spokesman for the Ahmadiyya Muslim Community, told CNN there are as many as eight more members at Mt. Carmel cemetery Monday helping out with “whatever the cemetery needs.”

“This attack is not just an attack on our Jewish brothers and sisters but on our common community,” Bhatti said. “We believe we need to be protecting our fellow humans from this extremism.”

Philadelphia police said they received a call at 9:45 a.m. Sunday about the vandalism.

“Upon their arrival at the listed location, responding officers were met by the complainant, who reported that (3) three headstones belonging to his relatives were damaged, due to being knocked over,” police said in an email. “The cemetery was inspected and approximately 100 additional headstones were found to be knocked over; it appears that the incident occurred sometime after dark on Saturday, Feb. 25, 2017.”

“I’m a child of a Holocaust survivor, so I grew up with stories of destruction of Jewish cemeteries,” Rebecka Hess told WPIV. “I always thought we were done with that.”

She was one of the hundreds of community members who came to the cemetery on Sunday to help fix the vandalized headstones.

The Anne Frank Center for the United States urged President Donald Trump to take action, tweeting: “Jewish graves in Philadelphia now vandalized. Stop this incubator of #Antisemitism and other hate. WE BEG YOU @POTUS @realDonaldTrump”

Pennsylvania Gov. Tom Wolf tweeted: “The vandalism of Jewish headstones at a Phila. cemetery is a cowardly, disturbing act. We must find those responsible and hold accountable.”

Philadelphia Mayor Jim Kenney issued a statement urging solidarity. “Hate is not permissible in Philadelphia,” he said. “I encourage Philadelphians to stand with our Jewish brothers and sisters and to show them that we are the City of Brotherly Love and Sisterly Affection.”

Local rabbi Yosef Goldman went on Facebook to say community support was immediate, writing: “Members of the local Ahmadiyya Muslim Community have showed up to help us right the headstones. They are calling their youth to come join us. #sacredresistance”

Last Monday, it was discovered that more than 100 headstones had been toppled at the Chesed Shel Emeth Society cemetery in the St. Louis suburb of University City, police said.

From the start of the year through Monday, 69 bomb threats have been made to 54 Jewish centers in the United States and Canada, according to the JCC Association of North America.

No bombs were found, and no one was injured in connection with the threats, according to the organization, which is working with law enforcement and the FBI to investigate the calls.