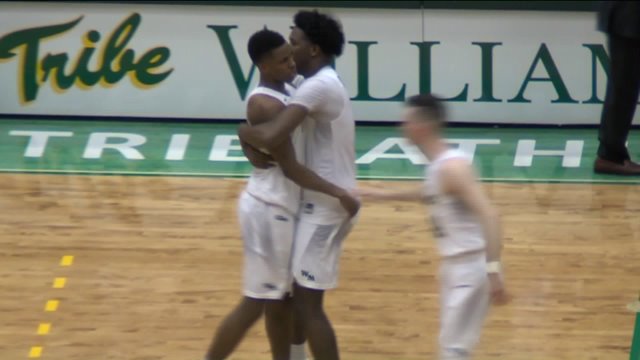 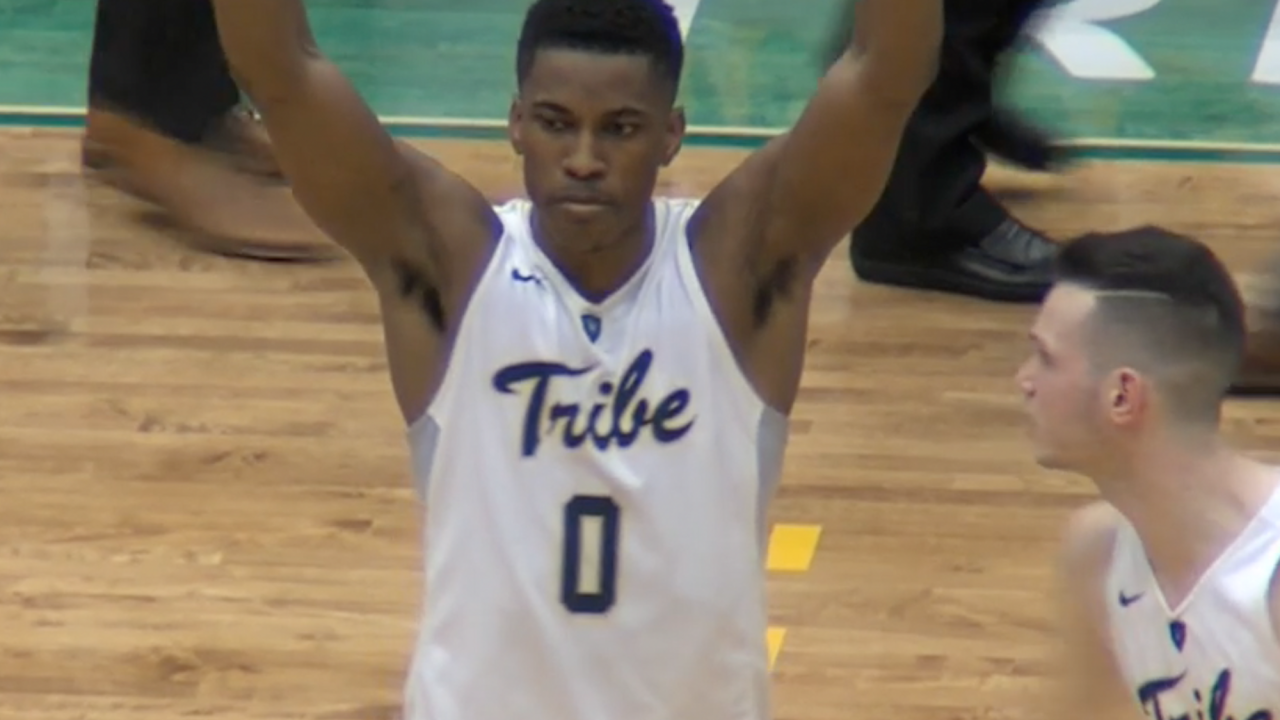 Daniel Dixon celebrates after an 83-79 win over Towson.

Prior to tip, W&M honored its senior class of manager Porter Reinhart, Daniel Dixon, Omar Prewitt and Michael Schlotman. The group closed out the day with its 76th victory in the Green and Gold, making it the program's winningest group since freshmen became eligible in 1972. Their 43 conference wins are the most ever for a Tribe class, CAA or otherwise.

Dixon led the attack with his second-straight 30-point performance and fifth overall. He notched 32 points on 7-of-14 shooting and a career-best 17-of-18 at the free throw line. The 17 free throws are the most for a CAA player this season, the fourth most in Tribe history and the seventh-highest total in NCAA Division I this year. Dixon added five rebounds and five assists. Freshman Nathan Knight helped out his elder statesmen with a career day. He finished with 20 points on 8-of-10 shooting to go with a team-high seven rebounds and two blocked shots. Junior Greg Malinowski rounded out the double-digit scorers with 10 points, while Prewitt turned in a nice all-around game with seven rebounds, four assists and three blocked shots.

After Towson scored on its opening possession, the Tribe ripped off 18-straight points ito seize control just over five minutes into the game. The Green and Gold connected on seven of its first eight shots, including a pair of three-pointers. Malinowski and Dixon each scored five points during the spurt, while Knight added a pair of dunks.

Schlotman, who earned his second career start, made a steal and turned it into a fastbreak lay-up to push the W&M lead to 9-2 and force a Towson timeout at the 16:46 mark. The break did little to stymie the Green and Gold momentum as Dixon knocked down a three-pointer and found Knight for a dunk. Malinowski's driving bucket at the 14:53 mark extended the Green and Gold advantage to 18-2.

The lead jumped to as much as 19, 31-12, in the first half on a pair of Malinowski free throws at the seven-minute mark. Towson held W&M without a field goal for seven and a half minutes and used an 18-4 to close within five. Brian Starr canned back-to-back three-pointers to slice the margin to 13. The Tigers, who entered the game ranked 15th nationally with nearly a quarter of its points coming at the free throw line, scored seven points during the run at the charity stripe, before a Zane Martin three-pointer at the 2:38 mark cut the Tribe lead to 35-30.

W&M answered with five straight to push the advantage back to double-digits. Junior David Cohn knocked down a three-pointer from the left wing, before Dixon dropped a pass off for a Knight slam. The Green and Gold led by nine, 42-33, at the intermission.

The Tribe scored seven in a row during the early stages of the second half to push the advantage to 18 points. Dixon scored five during th run, and Knight's free throws at the 15:50 mark padded the margin to 55-37. The Green and Gold lead expanded to 20 points for the first time as Prewitt found junior Jack Whitman for a lay-up at the 13:54 mark. It reached its pinnacle at 69-47 on a pair of Dixon free throws with 11:29 remaining.

On the ensuing Tribe possession, Dixon pulled down a big offensive rebound and put it back for two to quell the Towson rally. TU drew within two, 81-79, on a Jordan McNeill three-pointer with 12.1 seconds remaining, but Dixon put the game on ice, hitting two free throws with less than 10 ticks on the clock.

Towson finished the contest at 44.2 percent (23-of-52) from the floor, including 6-of-21 (28.6 percent) from three-point range. The Tigers held a 35-30 on the glass. Adala Moto led five TU players in double figures with 15 points, while Morman and McNeil each tallied 13. Starr and Martin finished with 10 apiece.

As a result of its victory, the Tribe earned the No. 4 seed in the 2017 CAA Championship. W&M faces No. 5 Elon in the second quarterfinal on Saturday, March 4, at 2:30 p.m. The CAA Championship will be played at the North Charleston Coliseum in Charleston, S.C., March 3-7. The Tribe-Phoenix match-up will be televised on Comcast SportsNet and streamed online at CAA.TV. For complete Tribe information in preparation for the CAA Tournament in Charleston visit TribeAthletics.com/MarchOnTribe.