20 years after Dolly the sheep, potential of cloning remains unclear 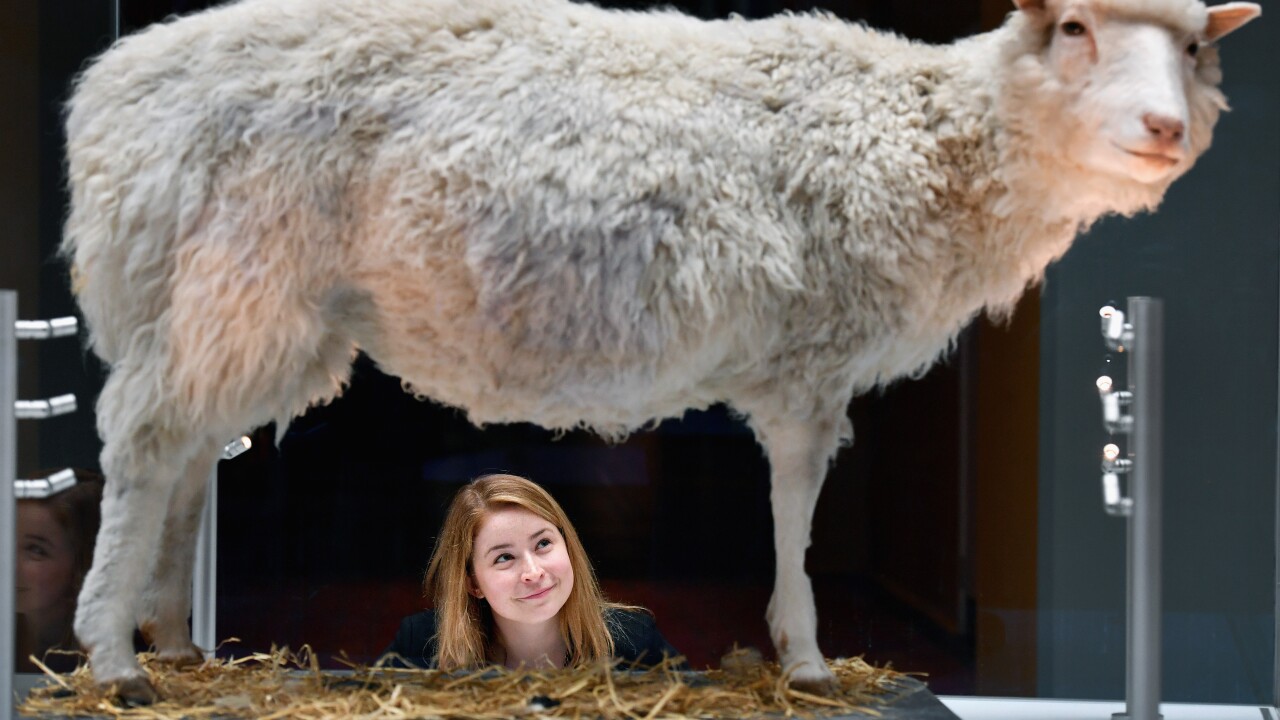 EDINBURGH, SCOTLAND – JULY 05: Sophie Goggins from the National Museums Scotland views Dolly the Sheep during the opening of a major new development at the National Museum of Scotland on July 5, 2016 in Edinburgh,Scotland. (Photo by Jeff J Mitchell/Getty Images)

On February 22, 1997, the world learned about a secret project that scientists at the Roslin Institute in Scotland had been working on.

More than seven months earlier, on July 5, 1996, they had aided a Scottish Blackface sheep in giving birth to a Finn Dorset lamb codenamed 6LL3.

She was the first mammal to ever be cloned from the cells of an adult animal.

Using a breakthrough technique called somatic cell nuclear transfer, scientists at Roslin took a nucleus — the part of the cell that contains most of its genetic information — from cells within the mammary gland of an adult sheep and stuck it inside an unfertilized egg from which the nucleus had been removed.

They stimulated the egg to develop into an embryo and planted the embryo into a surrogate mother. The lamb was dubbed Dolly, a nod to country music legend Dolly Parton and her famously ample bosom.

Years later, that same cell cluster was used to make four other sheep just like Dolly.

The lab had kept her birth secret for seven months to make the announcement coincide with the publication of the scientific paper describing the experiments that produced her, they said.

That week, they recall, they received 3,000 phone calls from all over the world, according to the Roslin Institute.

Much of the news reports had focused not on cloning sheep but on its potential for humans, said Alan Colman, who is now a visiting scholar in the Harvard University Department of Stem Cell and Regenerative Biology.

At the time, Colman was research director at PPL Therapeutics, which specialized in producing transgenic (genetically engineered) livestock.

“We’d underestimated the impact the announcement would make,” he said. “It was something we had prepared for, but we had been totally overwhelmed by the response.”

Previously, cloning had been done using only embryonic cells, and now researchers had showed that it was possible in cells from another part of the body — and adult body.

“At the time she was born, I was ecstatic, because no one had previously been able to use nuclear transfer to make an adult vertebrate from an adult cell,” Colman said.

Despite the headlines, cloning a mammal wasn’t the team’s main goal. They were out to develop a more efficient way to produce genetically modified livestock.

In fact, Dolly wasn’t even the first to ever be cloned. She was the first mammal cloned from an adult cell.

But scientists have learned a lot since developing the technique, and somatic cell nuclear transfer has been used in more than 20 species to make clones.

The Roslin Institute explained that people have long been motivated to try cloning to make copies of the very best animals for agricultural purposes. Also, since the mid-1980s, there has been an interest in making new uses for farm animals, including producing human proteins in the milk of transgenic cows or sheep for medicinal use in humans.

But by and large, scientists don’t see a need to clone humans.

Instead, they are using what they learned from creating Dolly to make advancements in stem cell therapy, such as to create embryonic stem cells directly from a patient’s own cells. They can then study the progression of whichever disease the patient has.

Dolly herself lived out her days at the Roslin Institute and was able to produce six lambs.

But she was euthanized at age 6 after being diagnosed with progressive lung disease and after a long battle with arthritis.

This was further exemplified by Dolly’s four cloned “sisters,” who were recently euthanized because they too began to show symptoms of osteoarthritis.

“OA, as you may know, is a progressive disease, and we took appropriate measures to manage the condition at the time under veterinary guidance,” said Kevin Sinclair, a developmental biologist at the University of Nottingham who led research on the sheep.

“These animals were in their 10th year and so coming towards the end of their natural lifespan.”

A recent study of the remaining clones, however, found that they aged the same as naturally born sheep.

To investigate this further, the team at Nottingham will now conduct postmortem examinations to truly understand what’s going on inside the animals.

“The final phase of our study … involves detailed postmortem analyses of different tissues and organs in order to gain a better insight into the aging process in these animals,” Sinclair said.

The Roslin Institute donated Dolly’s body to the National Museum of Scotland, where she stands to this day.