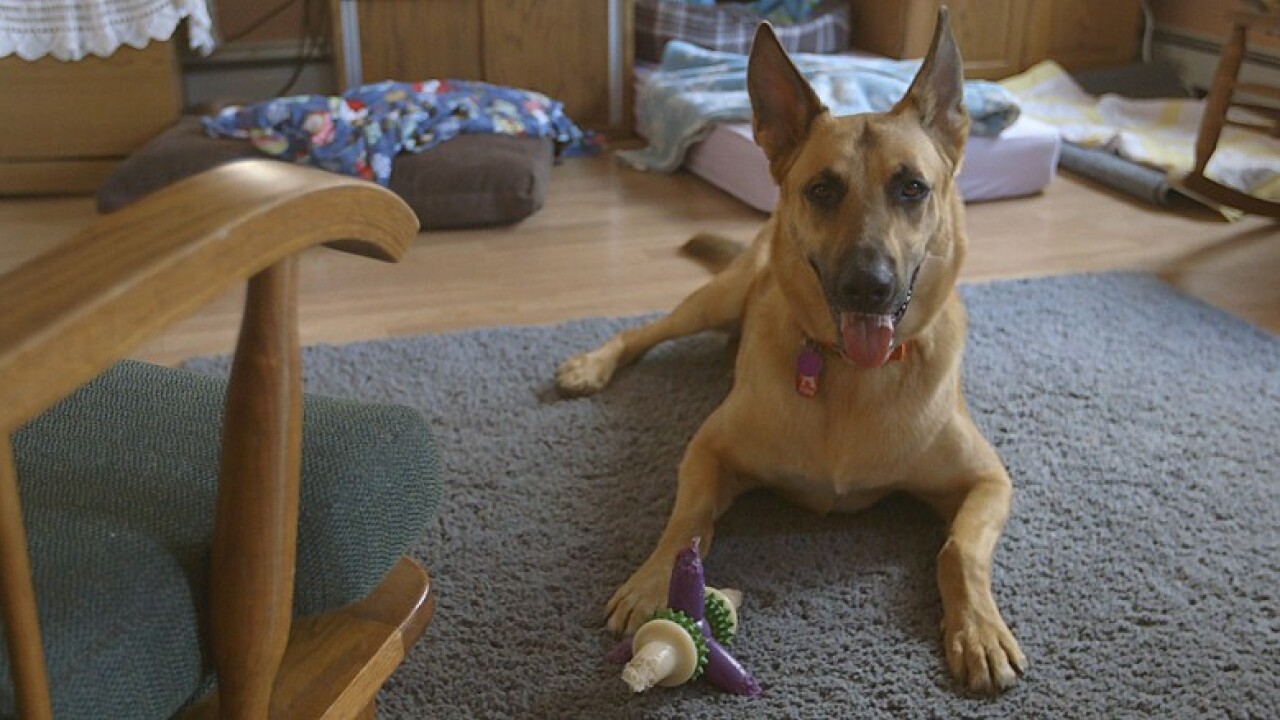 ST. CLAIR, Mich. – Jeb, a much-loved service dog for an elderly man, was locked up in animal control when the judge’s verdict came in: He would be put to death for killing a neighbor’s dog.

Jeb’s owners, Penny and Kenneth Job of St. Clair, Michigan, couldn’t believe that their sweet Jeb, the same gentle dog who helps Ken get up when he falls down, who lives peacefully with three other dogs, seven cats and a coopful of chickens, could ever harm another living being.

So the family used a forensic technique often used for human defendants to save their dog from death row last fall.

Jeb Stuart Job stands hip-high, with a muscular frame, big dark eyes and a long black snout. He’s had a rough two years on this Earth.

In January 2016, when he wasn’t quite a year old, he was found chained inside a shed in Detroit. His owner had died, and the rest of the family didn’t want him.

Kandie Morrison, a volunteer with a dog rescue agency, got the call.

Job, 79, an Air Force veteran who owned a drywall business, has a neurodegenerative disease called Charcot-Marie-Tooth. He fell in love with the Belgian Malinois puppy. Dr. Karen Pidick, their veterinarian and neighbor in their rural Michigan town, trained Jeb to help Job stay steady on his shaky legs.

The family was a happy one until eight months later.

According to court testimony, on the morning of August 24, the Jobs’ neighbor, Christopher Sawa, looked out his kitchen window and saw Jeb standing over the lifeless body of his own dog, Vlad.

Sawa ran out into his yard. He tried to give Vlad mouth-to-mouth resuscitation, but it was too late. The tiny Pomeranian was dead.

The trial of Jeb Stuart Job

On September 19, all parties gathered at district court in St. Clair County.

If Judge Michael Hulewicz deemed Jeb a “dangerous animal,” the dog would be put to death.

Sawa, the Jobs’ neighbor for more than 30 years, testified about finding Jeb standing over his dead Pomeranian.

“It was horrifying. It was terrifying,” he said, according to transcripts. CNN contacted the Sawas, who declined to comment.

He said it wasn’t the first time Jeb had scared him.

“I was afraid of the dog. The dog always barked,” he said.

Now, his beloved Vlad was gone.

“We’ve never had any children,” he testified. “The dog was like a child to us.”

Job testified that Jeb had indeed gotten away from him that morning: He and the Jobs’ other three dogs had run off in the opposite direction of the Sawa home, toward a house with a pond where they liked to swim.

The Jobs’ attorney, Edward Marshall, pointed to a lack of physical evidence linking Jeb to Vlad’s death and questioned whether another large animal had killed Vlad. After all, Pidick, the neighborhood vet, had testified that an unfriendly stray dog had been spotted in the neighborhood, and foxes were known to live in the surrounding woods.

In the end, the judge said Jeb met the legal definition of a dangerous animal, and he made what he said was a tough decision.

“I have no choice except to follow out the state law that the animal would be destroyed,” Hulewicz said. “I don’t like to do this. I don’t like it at all.”

That’s when the Job family asked to have testing done to see whether Jeb’s DNA matched the DNA in Vlad’s wound. They said they hadn’t asked for it sooner because they thought Vlad had been cremated and there would be no way to get his DNA.

But at the trial, it came out that Vlad’s body was in a freezer.

The Jobs arranged to have swabs taken from Vlad’s wound and the inside of Jeb’s cheek. The samples were sent to the Maples Center for Forensic Medicine at the University of Florida College of Medicine. The process cost $416, according to the Jobs.

On October 24, exactly two months after Jeb was taken into custody, AnnMarie Clark, a forensic DNA analyst at the center, sent in her findings: The DNA in the wound didn’t match Jeb’s DNA.

“Jeb is not the dog that killed (Vlad),” Clark wrote.

“We were relieved. We were absolutely relieved,” said Penny Job, Ken’s wife.

The DNA showed that another dog had killed Jeb, Clark told CNN — but exactly who that dog is may forever be a mystery.

Dogs have no rights

Jeb was allowed to go home the following week, after his owners signed an agreement promising that they would make sure Jeb wouldn’t leave the yard unleashed and that they would maintain a secure fence to keep their animals in the yard.

They say that during his nine weeks in animal control, he went from 90 to 75 pounds, and he became scared and skittish.

“The dog was thin and sick,” Penny Job said. “And he lost all his social skills. He was afraid to go outside.”

“We fed him a meal day,” Campau said. “Maybe he was overfed at home.”

Campau also said some behavior changes are to be expected after an animal is released from spending nine weeks of spending 23 hours a day in a kennel that’s 6 feet long by 3½ feet wide.

“Veterinarians say after a dog is in a kennel environment for an extended period of time, there’s certainly going to be an adjustment period when the dog gets out,” Campau said.

Even now, more than three months after his return home, Jeb is still scared of strange men, his owners say.

Still bitter that their innocent dog was nearly put to death, Jeb’s owners wonder why they had to come up with the idea of DNA analysis. Why didn’t the court do it before condemning Jeb to death? After all, that kind of testing is often done with human defendants.

The answer is simple, according to David Favre, a professor at Michigan State University College of Law and editor in chief of the Animal Legal and Historical Center.

Humans accused of a crime have rights under criminal due process.

“In a criminal prosecution, where you’re putting a person in jail, we have the highest level of protection,” Favre said.

It’s a different story with dogs.

He wonders whether courts should reconsider and make DNA analysis a regular part of the process when a dog’s life hangs in the balance.

“It’s an easy thing to do. We just haven’t thought of it in this context,” he said.

He applauds the Jobs for saving their pet.

“Now people will realize they can do this, that it’s a tool,” he said. “They used a very creative defense.”