Male contraceptive gel effective in monkeys, but will it work in humans? 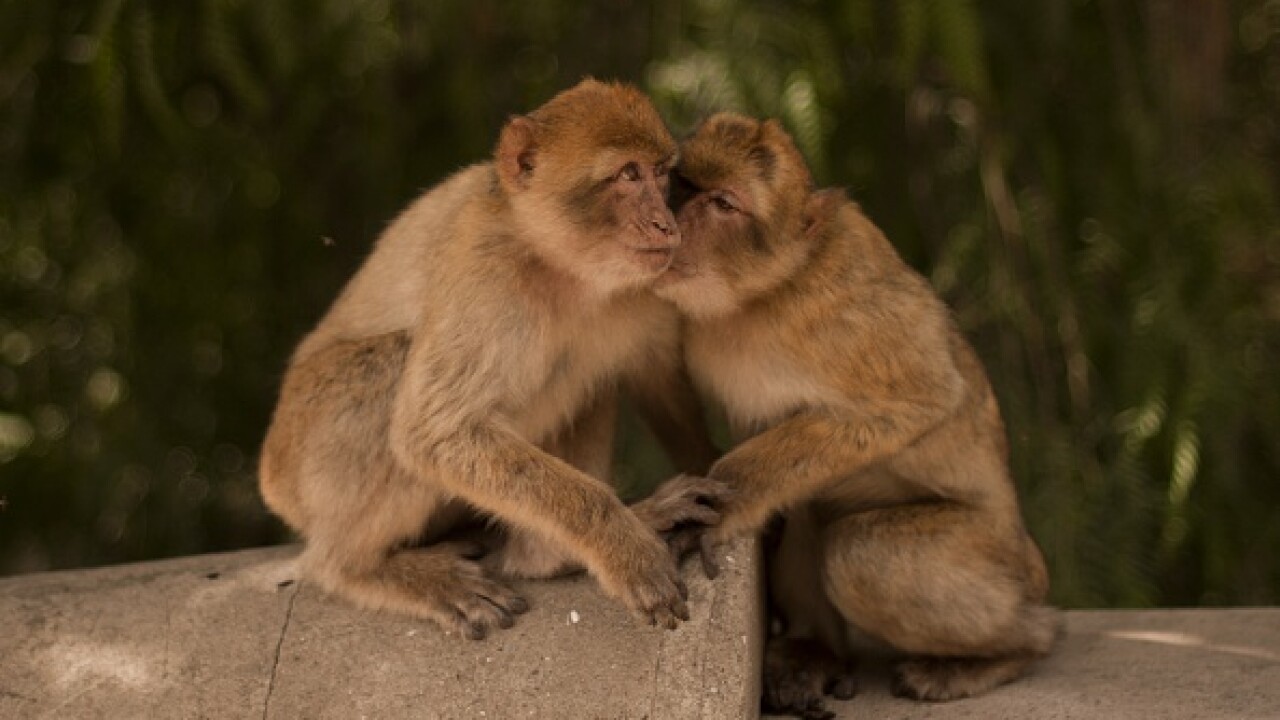 A picture taken on October 11, 2014 shows monkeys in Gibraltar. Britain’s tiny outpost of Gibraltar said on October 9 it has rounded up its 30 most troublesome Barbary macaque monkeys and will send them to a safari park in Scotland. Gibraltar’s macaques, Europe’s only wild population of monkeys, are a popular tourist attraction but their numbers have risen to around 200 and some have started roaming into town, looting bins, foraging for food and scaring locals. AFP PHOTO / JORGE GUERRERO (Photo credit should read Jorge Guerrero/AFP/Getty Images)

When it comes to contraception, there are no long-lasting, easily reversible options for men. The only choices are condoms or a vasectomy.

And it’s been this way for more than a century.

But a new injectable gel that blocks sperm inside the body, preventing them from leaving while allowing seminal fluid to pass through, has proved effective in trials using monkeys. The researchers behind the product, known as Vasalgel, hope it could get trials in humans within a few years.

“What was important here was that this worked and was safe in animals similar to humans,” said Elaine Lissner, executive director of the Parsemus Foundation, the medical research organization behind Vasalgel that is also leading the trials.

A new study, published Tuesday, involved 16 male monkeys receiving injections of Vasalgel who were released into social outdoor housing with females. Any adverse effects, as well as their ability to impregnate females, was compared with a historical sample of monkeys that had received vasectomies.

“It was a simple efficacy study,” Lissner said, meaning the researchers merely set out to see whether the gel was safe and worked to prevent pregnancy.

The social groups were monitored for at least one breeding season, and the team reported in its paper that none of the females in the group conceived during that time.

One monkey had the gel inserted incorrectly, and another developed a sperm granuloma, or lump of sperm, but the majority tolerated the gel and saw little inflammation, Lissner said, adding that rates of granuloma and inflammation are usually higher after a vasectomy.

Lissner’s team is hoping to conduct clinical trials in humans next year and plans to stage further animal trials this year in preparation. But although the gel worked well in monkeys, it won’t necessarily translate perfectly to humans.

“This is a bigger, longer task than we first anticipated,” Lissner said.

Stopping sperm in their tracks

Administering Vasalgel inside a man, or a monkey, involves a polymer injected into the sperm-carrying tubes between the testicles and penis, known as the vas deferens, to block sperm as they are released.

The injection is given under anesthetic and mimics the effect of a vasectomy, but without the snip.

“It’s a sticky gel that goes into (the tubes) and basically filters out sperm,” Lissner said.

A similar polymer called RISUG is being trialled in India and has proved effective in men.

The new gel is injected in a location similar to that cut during a vasectomy and allows fluids through while blocking sperm. The backed-up sperm are then reabsorbed by the body.

A further benefit is that — unlike with a vasectomy — the gel is meant to disintegrate when a second solution is injected to break down the barrier and flush it out. This would make the process reversible.

Reversibility was shown in trials on rabbits, but it was not tested in the new trial on monkeys.

Recent trials on baboons also failed to reverse the effect.

“Successful reversibility will be the key to make this world-changing,” Lissner said.

A further factor likely to impact numbers using this method is that Vasalgel still involves minor surgery to pull out the sperm tubes and inject the gel. What’s more, when sperm are reabsorbed into the body, there is a risk of an immune reaction, potentially leaving men less fertile after reversal — similar to vasectomy, though risks with the gel are lower, according to Lissner.

“Fifty percent of men after a vasectomy reversal remain infertile,” said Dr. Ilpo Huhtaniemi, emeritus professor of reproductive endocrinology at Imperial College London, who was not involved in the new study. However, he points out that this doesn’t prevent men from having children, as sperm can still be collected and used for in-vitro fertilization.

The latest evidence on monkeys has many hoping a new form of contraceptive may be on the horizon, but experts believe more evidence is first needed on its reversibility.

“In order for it to have a chance of replacing the traditional surgical method of vasectomy, the authors need to show that the procedure is reversible, and it’s reassuring that apparently such studies are ongoing,” said Allan Pacey, professor of andrology at the University of Sheffield who was also not involved in the new research. “The idea of trying to replace the traditional method of vasectomy by inserting a gel into the tube which carries sperm from the testicles to the penis at ejaculation is not a new one. However, we haven’t seen much progress in developing the idea in recent years, so this study is a useful step in the right direction.”

A male hormonal birth control injection was shown to prevent pregnancy in a 2016 study but was ended early due to side effects. Other approaches have involved strategies to control the production of sperm by targeting the hormone testosterone, but this had side effects of depression and weight gain.

In 2015, Japanese scientists discovered a protein, calcineurin, found to be crucial in helping sperm swim and break through the membrane of a female egg in order to fertilize it. When the genes behind this protein were blocked during studies in mice, they became infertile.

But Vasalgel is further along than the Japanese research and has not shown severe side effects in animals. Lissner is confident that her team’s gel will overcome the challenges. She sees value in providing birth control that does not interfere with hormones.

“Why manipulate the whole body when there’s a small tube that all the sperm swim through?” she asked.

Huhtaniemi agrees that Vasalgel could be valuable in certain populations but feels that in terms of birth control for the masses, a less-invasive option is needed.

“We need a pill. That’s the easiest to administer,” he said. “It is feasible. We just need to find the right target.”