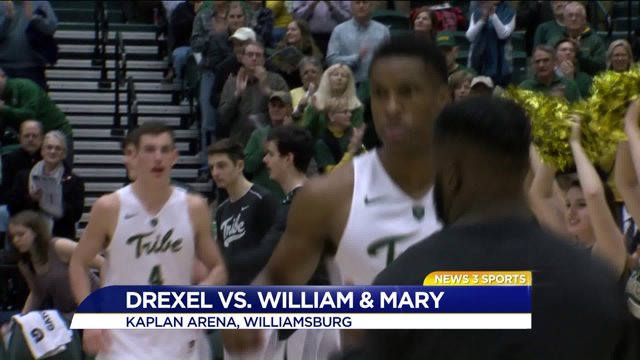 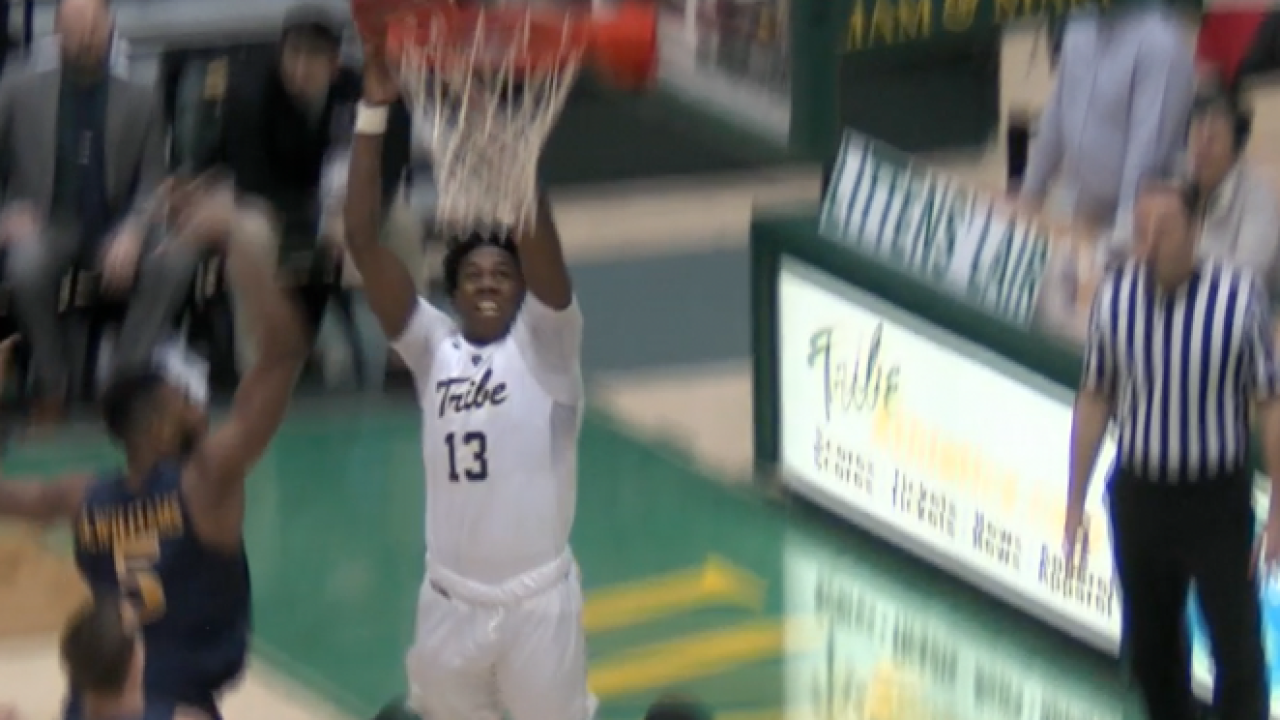 WILLIAMSBURG, Va. - The William & Mary men's basketball team enjoyed a historic offensive night in blowing past the Drexel Dragons, 108-85, for its third straight win on Monday inside Kaplan Arena. The Tribe (12-9, 6-4 CAA) exploded for 17 3-pointers, the second highest total in W&M history and the most ever allowed by Drexel, to go along with the second-best field goal total (43) and the third-most assists in program history (28). The 108 points are the second most in the Tribe's CAA history and tied for the most ever allowed in regulation by the Dragons (8-15, 2-8) in program history.

of-16 from the floor and tied the school record going a perfect 5-of-5 from 3-point range. It marked the second time in his W&M career that Dixon hit five or more 3-pointers in a game without a miss. Prewitt, who earlier in the day was named CAA Player of the Week, was 9-of-13 overall and connected on a career-high 6-of-9 from 3-point range. He added an all-round stat line with a game-high seven rebounds and five assists compared to just one turnover.

Leading by one at the intermission, the Tribe came out on fire in the second half, hitting five-straight 3-pointers. Dixon and Prewitt each hit a pair during the stretch, while junior Connor Burchfield added the other. Junior David Cohn found Prewitt on the break for a left wing trey to extend the Tribe lead to double digits for good, 62-50, and force a Drexel timeout with 15:26 remaining.

The Tribe pushed its advantage over 20 midway through the second half thanks to a 13-0 run. Dixon scored seven on the run, including a fast-break dunk. He put back his own miss at the 10:46 mark to extend the Green and Gold cushion to 79-56. W&M clicked at a high-level offensively in the second half, scoring on 26 of its first 31 possessions. The Tribe averaged 1.62 points per possession and scored 71.8 percent of the time in the final 20 minutes. W&M scored 53 second-half points, hitting 65.8 percent (25-of-38) from the field.

W&M tallied its third 100-point game of the season, marking just the second time that has occurred in school history and the first since 1954-55. The Tribe finished the night shooting a season-high 63.2 percent from the field (43-of-68), including 17-of-30 (56.7 percent) from 3-point range. It was their best shooting night since 2015, 13th-best single-game total in program history, while the 3-point percentage ranked 11th in Tribe lore. W&M also outrebounded Drexel, 40-25, and dished out 28 assists on its 43 made field goals.

While Prewitt and Dixon turned in the top scoring nights, W&M enjoyed a balanced offensive attack with five players scoring eight points. Cohn finished with eight points to go along with a team-high six assists. Junior Jack Whitman was a perfect 4-of-4 from the floor and added six rebounds, a career-high four assist and two blocked shots to his eight points. Sophomore Paul Rowley also enjoyed a nice all-around stat line of eight points, five rebounds, four assists and three blocked shots. Freshman Nathan Knight and Burchfield each added eight points as well. Knight was 4-of-5 from the floor to go with three assists, while Burchfield was 2-of-3 from 3-point range.

Both teams made big runs in the opening 20 minutes to sway momentum to both ends of the pendulum. After trailing early, the Green and Gold opened up as much as a 15-point advantage thanks in large part to a 15-1 run. During the spurt, W&M used the defense to its advantage, holding the Dragons without a field goal for nearly nine minutes.

The Green and Gold missed its first four shots from the field, before eventually finding the mark and hitting 13 of its next 16. Prewitt knocked down two-straight 3-pointers to spark eight W&M points in a row. His corner triple just four minutes into the contest gave the Tribe its first lead at 10-9.

Back-to-back 3-pointers from Prewitt and Rowley extended the Tribe lead to double-digits for the first time and forced a Drexel timeout. Burchfield hit Prewitt for a corner three at the 11:29 mark to give the home team a 21-10 lead. The margin ballooned to as much as 15, 33-18, on a steal and fast-break dunk by junior Oliver Tot with 7:03 remaining in the opening half.

Five-straight points put W&M back on top at the intermission. Rowley knocked down his second triple of the opening half, before a cutting Tot lay-up off a dish from Whitman gave the Green and Gold a three-point cushion. Lee's floater near the half-time horn cut the W&M advantage to one, 45-44, at the break. Both teams shot better than 50 percent in the opening 20 minutes. The Tribe connected on 60 percent (18-of-30), including 9-of-15 from 3-point range, while Drexel shot 51.9 percent (14-of-27).

The Tribe closes out its four-game homestand by hosting Northeastern on Thursday, Feb. 2, night. Tip-off is slated for 7 p.m., and the game will be broadcast for FREE in HD on Tribe Athletics TV via Stretch Internet. Tribe fans can also catch the action over the Tribe Radio Network with Jay Colley and Charlie Woollum on the call. The Tide 92.3 FM and 107.9 Bach FM are the flagship stations of the Tribe Radio Network and the audio is also available over the Web at TribeAthletics.com.