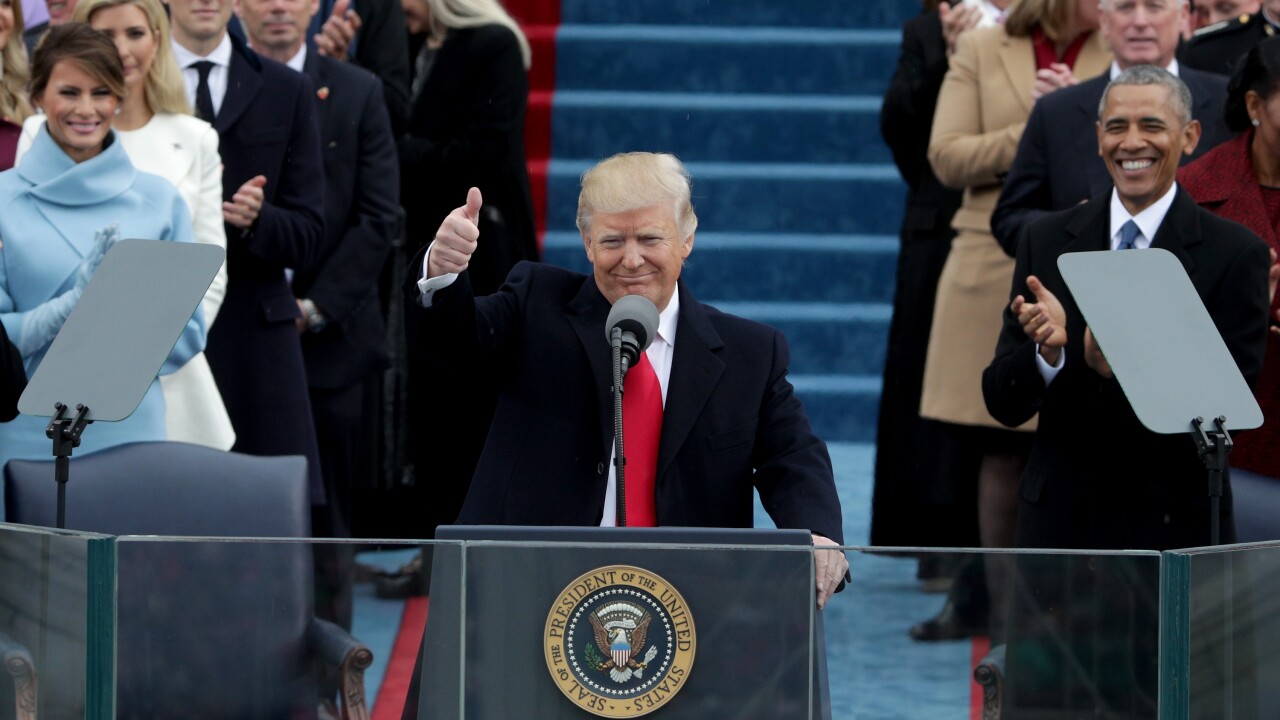 WASHINGTON, DC – JANUARY 20: President Donald Trump gives a thumbs up after his inauguration on the West Front of the U.S. Capitol on January 20, 2017 in Washington, DC. In today’s inauguration ceremony Donald J. Trump becomes the 45th president of the United States. (Photo by Alex Wong/Getty Images)

Shortly after Donald Trump was sworn in as the 45th president of the United States, he gained another prestigious title: @POTUS.

The Obama administration handed over the Twitter handles for official accounts like @POTUS, @FLOTUS, @VP, @WhiteHouse and @PressSec to the incoming Trump administration on Friday in the first Twitter transfer of power in U.S. history.

WASHINGTON, DC – JANUARY 20: President Donald Trump gives a thumbs up after his inauguration on the West Front of the U.S. Capitol on January 20, 2017 in Washington, DC. In today’s inauguration ceremony Donald J. Trump becomes the 45th president of the United States. (Photo by Alex Wong/Getty Images)

Sean Spicer, the incoming White House press secretary, said Friday morning he would get to take over the @PressSec account at exactly 12:01 p.m. after Trump officially becomes president.

Trump’s team will be able to start fresh with accounts. All of the tweets from the previous administration will be removed and archived on a set of newly created accounts, including @POTUS44, @VP44 and @FLOTUS44.

If you’ve retweeted or embedded posts from these accounts over the years, they will still show up, but from an account ending in 44.

These archived accounts, along with White House social media accounts on Facebook, Instagram, YouTube and Tumblr, will be managed by the National Archives and Records Administration.

But perhaps most importantly, Trump’s administration will inherit the millions of followers for each account. The @WhiteHouse and @POTUS accounts each have more than 13 million followers.

That also means those who chose to follow these accounts for Obama will automatically be following Trump and his administration — at least until they opt out.

The massive social media transfer has been in the works for months. The White House first announced its plan just days before the election — at a time when many expected Hillary Clinton to win.

“While much of the digital transition is unprecedented in the United States, the peaceful transition of power is not,” Kori Schulman, special assistant to the president and deputy chief digital officer, wrote in a blog post in October.

As a result of those efforts, Trump and his team will now be able to choose whether to tweet from @POTUS or his personal account @RealDonaldTrump, which recently topped 20 million followers. It’s unclear which one Trump, known for tweeting at all hours, will prefer.

Trump has also reportedly traded in the Android phone he sometimes uses to tweet for a “secure, encrypted device approved by the Secret Service,” according to The New York Times.

It is the honor of my life to serve our country, alongside President @realDonaldTrump, as the 48th Vice President of the United States. 🇺🇸 pic.twitter.com/FMxqI9Z2Lq

Kellyanne Conway, Trump’s former campaign manager, appeared to confirm the device change in an interview with Fox News on Friday. When asked if Trump would still be able to tweet from the new phone, she said, “Oh yes, there’ll be social media platforms.”

Some have raised concerns in recent weeks about the risks of Trump continuing to tweet from his personal account. If his account were hacked by a group, it could effectively create a national security crisis.

Ian Plunkett, a spokesman for Twitter, directed questions about specific security protocols to Trump’s transition team. But he noted Twitter does have a dedicated team in Washington that works with the White House and Congress on best practices, including security.

Reps for Trump’s transition team did not immediately respond to a request for comment.

In one interview this week, Trump said that he does not actually enjoy tweeting, but feels it’s the best way to get his message directly to people.

“If the press were honest, which it’s not, I would absolutely not use Twitter,” Trump said. “I wouldn’t have to.”