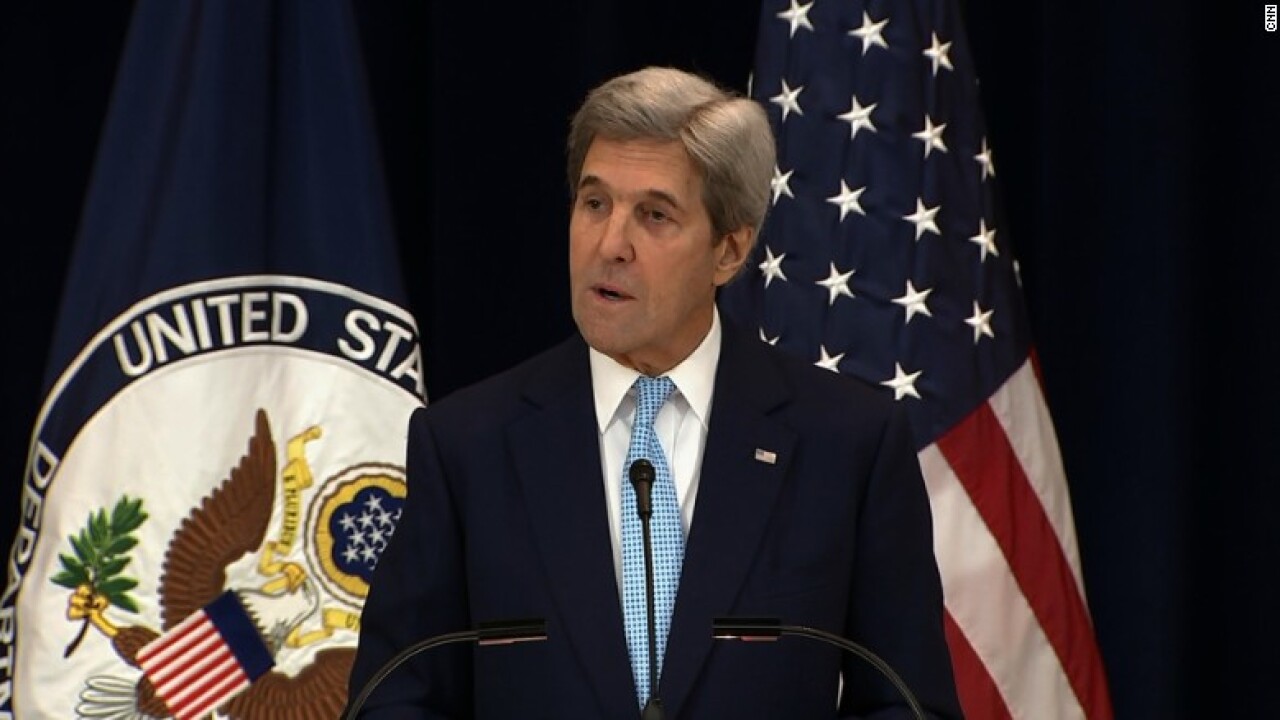 With less than a month left in office, Secretary of State John Kerry laid out the Obama administration’s vision for Middle East peace Wednesday, offering a framework for a deal between Israelis and Palestinians along with an implicit warning to President-elect Donald Trump.

Kerry defended the United States’ decision to abstain from a vote on — and not veto — a UN resolution condemning Israeli settlements in the West Bank and East Jerusalem as one aimed at “preserving the two-state solution” and offered a stinging rebuke of Israeli settlement policy as he promoted a two-state solution to the conflict as “the only way to achieve a just and lasting peace between Israelis and Palestinians.”

“I am also here to share my conviction that there is still a way forward if the responsible parties are willing to act,” Kerry said, opening his speech.

But he underscored his optimism with a warning: “Despite our best efforts over the years, the two-state solution is now in serious jeopardy.”

Kerry called on both Isrealis and Palestinians to take steps showing the seriousness of their commitment to a two-state solution, such as complying with the terms of the Oslo Accords.

He also ruled out the possibility the US would join efforts to dictate peace terms at the UN Security Council or that the US would recognize a Palestinian state without a negotiated agreement.

The vision Kerry outlined Wednesday, though, is likely to be short-lasting: In less than a month, Kerry and Obama will leave office and Trump — who has vowed to radically reverse the recent downward trend in US-Israel relations — will take over.

And Congress is taking steps to back Trump’s approach. House Republicans are looking to bring up a non-binding House resolution condemning a recent vote at United Nations that has caused intense blowback from Israel.

Kerry rejected Israeli claims that the US worked behind the scenes to guide the UN resolution to passage and criticized those claims as an attempt to “distract attention from what the substance of this vote really was all about.”

“The United States did not draft or originate this resolution, nor did we put it forward,” he said, adding that the US simply made it clear to the resolution’s sponsors that “if the text was more balanced, it was possible we wouldn’t block it.”

Kerry lamented the conflict’s status quo, pointing to the impact on children in both Israel and the Palestinian territories — from Israeli children facing rocket fire and must rush to shelter at the sounding of a siren, to destruction in the Gaza Strip, where he said he remembered seeing Palestinian children playing in the rubble.

Kerry argued that current Israeli settlement policy in the region was leading toward a future of “one state and perpetual occupation” and slammed the arguments of right-wing Israeli officials who argue settlements are aimed at bolstering Israel’s security. He also reserved special criticism for Israeli Prime minister Benjamin Netanyahu, whose governing coalition Kerry called “the most right-wing in Isreali history, with an agenda driven by the most extreme elements.”

“They’re leading towards one state,” he said.

And the secretary of state also pointed to the recent rapid growth of settlements east of the 1967 borders, which have long been seen as the basis for the territory of a future Palestinian state alongside Israel.

He noted that the Israeli settler population in the West Bank has grown by 270,000 since the Oslo Accords of the 1990s.

But while he argued that settlements furthered the likelihood of a one-state solution that would jeopardize Israel’s status as both a Jewish and democratic state, Kerry stressed that settlements are not “the whole or even primary cause of this conflict.”

Kerry also acknowledged that Palestinian leaders, including the moderate Fatah faction that rules the West Bank, continue to glorify Palestinian terrorists who carry out attacks against Israeli civilians.

The outgoing secretary of state’s speech at the State Department comes amid heightened tensions between the US and Israeli administrations over the UN resolution vote.

And Kerry sought to push back against arguments that the abstention amounted to a US betrayal of Israel.

Kerry defended the administration’s commitment to Israel, arguing that “no American administration has done more for Israel’s security than Barack Obama’s” and noting that Netanyahu has acknowledged as much as it comes to US security cooperation and military aid.

Trump, in his latest breach of presidential transition protocol, weighed in on Twitter Wednesday morning ahead of Kerry’s speech to make clear that change was on the way.

“We cannot continue to let Israel be treated with such total disdain and disrespect. They used to have a great friend in the U.S., but not anymore. The beginning of the end was the horrible Iran deal, and now this (U.N.)!” Trump tweeted. “Stay strong Israel, January 20th is fast approaching!”

Netanyahu offered a quick reply to Trump on Twitter, thanking him for his “warm friendship” and “clear-cut support.”

Netanyahu’s government has said in recent days Israel will provide detailed, sensitive information to the incoming Trump administration to bolster their claims that the US played a covert role in pushing passage of the UN Security Council resolution on Israel. The Obama administration has denied any such involvement.

Netanyahu’s outrage, though, has played out publicly. The Israeli prime minister launched a scathing attack on the Obama adminstration on Sunday and summoned the US ambassador to a face to face meeting.

The United States abstained on the resolution, allowing it to pass, rather than vetoing it — as it usually does with resolutions it sees as overly critical of Israel.

Kerry had planned to give the speech last Thursday, when the vote was originally planned. Those plans got scrapped after the proposal’s original sponsor, Egypt, forced a delay for a day.