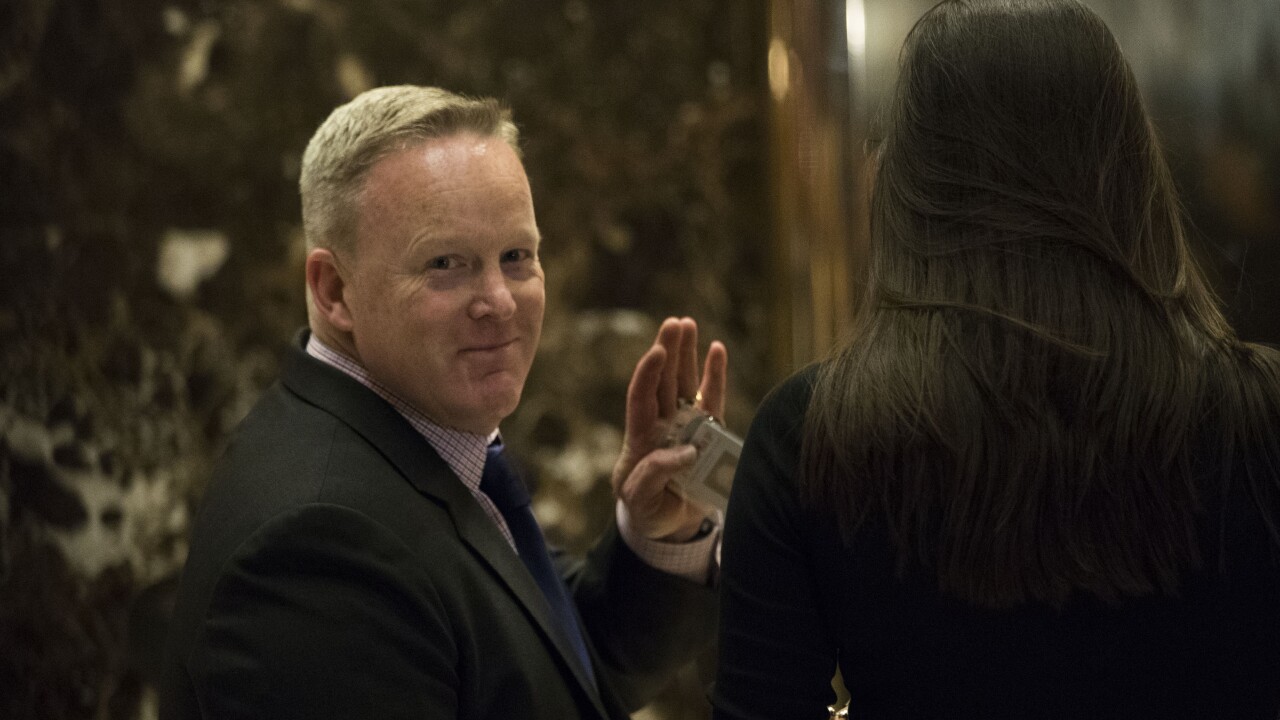 NEW YORK, NY – NOVEMBER 16: Sean Spicer, communications director for the Republican National Committee, arrives at Trump Tower, November 16, 2016 in New York City. Trump is in the process of choosing his presidential cabinet as he transitions from a candidate to the president-elect. (Photo by Drew Angerer/Getty Images)

NEW YORK, NY – NOVEMBER 16: Sean Spicer, communications director for the Republican National Committee, arrives at Trump Tower, November 16, 2016 in New York City. Trump is in the process of choosing his presidential cabinet as he transitions from a candidate to the president-elect. (Photo by Drew Angerer/Getty Images)

“Sean, Hope, Jason and Dan have been key members of my team during the campaign and transition. I am excited they will be leading the team that will communicate my agenda that will Make America Great Again,” Trump said in a statement.

Spicer, 45, has spent six years as RNC communications director and 15 years in communications for Republicans in Washington. He has well-established relationships with the Washington press corps and is a familiar face on both cable news and the D.C. social circuit.

For Washington reporters who fear Trump’s treatment of the press, Spicer’s appointment may be seen as a positive sign.

While Spicer can be combative with critics and, like Trump, is known for unleashing his Twitter account on reporters and news organizations, he is also a veteran of the Washington press relations game and likely to provide an open line of communication into Trump’s White House.

One of Spicer’s first tasks will likely be to address concerns that Trump intends to limit media access and do away with the practice of daily press briefings. The Trump transition has long insisted that Trump will uphold the practice, even as his future chief of staff Reince Priebus has hinted at the need for changes.

Since Trump became the Republican nominee, Spicer has been one of his staunchest defenders, doggedly sticking up for the billionaire through the campaign and the transition.

Last Wednesday, Spicer praised Trump for transparency — despite Trump’s decision to postpone his first press conference as president-elect until January.

“What we’ve seen in government for so often is that people have been shady — about their roles, hiding things, not releasing things,” Spicer said in an interview with CNN’s Kate Bolduan. “We have a camera for goodness sake. Every single person who enters Trump Tower, you get to see them go up, go down, they talk to the press.”

Spicer beat out a number of other candidates who were said to be under consideration for the press secretary role, including conservative pundits Laura Ingraham and Monica Crowley.

Last Thursday, the transition announced that Crowley had been appointed senior director of strategic communications for Trump’s National Security Council.