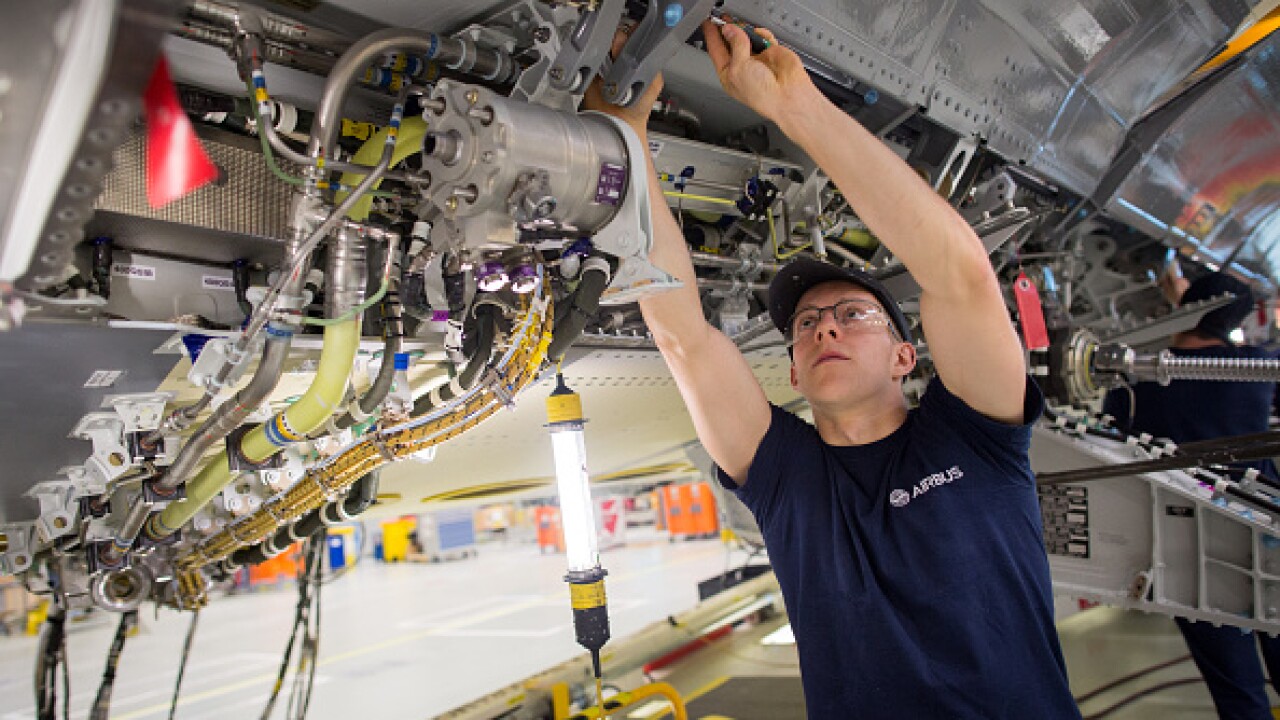 BRISTOL, ENGLAND – NOVEMBER 19: A skilled fitter works on the spoiler of a A400M at the Airbus aircraft manufacturer’s Filton site on November 19, 2015 in Bristol, England. The site at Filton’s main role is the designing and manufacture of wings, fuel and landing gear systems for all ranges of Airbus aircraft currently employing over 4,000 people. It is estimated another 100,000 jobs are generated in the UK by Airbus wing work, both directly as well as indirectly through an extended supply chain of over 400 companies. (Photo by Matt Cardy/Getty Images)

President-elect Donald Trump wants to “bring the jobs back.”

But there already are many job openings right here in America, even in manufacturing. The bigger challenge is filling them.

Earlier this year, openings rose as high as 400,000 in April, one of highest marks since the Labor Department first started counting the figure in 2000.

Hiring has picked up a little but it hasn’t kept pace with openings in recent years.

Experts caution that the rise in job openings doesn’t compensate for the millions of manufacturing jobs lost since 2000.

“It’s nice to have those jobs back, but the rate of change is not such that you’re going to have a renaissance in the Rust Belt,” says Joseph Fuller, a professor at Harvard Business School, who has researched job skill trends.

A few reasons — both good and bad — help explain why American factories have plenty of openings but not enough hires.

1. Improving job market: When the job market gains momentum, people start moving jobs, leaving openings that need to be filled. The unemployment rate is down to 4.6% from 10% in 2009 — a sign that the job market has recovered.

3. Passive recruitment: Some employers post job openings once they see orders for their goods increase. But they may want to be sure the pick-up is here to stay and take a “wait and see” approach before actually hiring a person.

4. Trumped up optimism in manufacturing: Since the election, about 78% of manufacturers are either somewhat, or very, positive about their future outlook, according to the National Association of Manufacturers. That’s up from 61% in September. Optimism tends to breed job openings.

The problem with the increase in job openings is the quality and type of manufacturing jobs.

“The low skill, low wage jobs are actually moving away and being replaced by the high-skill, high-wage jobs,” says Ahu Yildirmaz, head of the ADP Research Institute.

Back in 2008, half of U.S. manufacturing firms offered jobs that, on average, paid $25 or less per hour. This year, only about 30% of manufacturers are paying $25 or less an hour, according to ADP.

The trillion dollar question is whether Trump can bring back loads of manufacturing jobs, as he has promised. Trump’s big, $1 trillion infrastructure proposal could be a boon for construction and manufacturing jobs in America. Done right, it would also boost U.S. economic growth.

Optimistic employers may also be betting on Trump’s promise to strip away regulations on energy — a sector that requires lots of parts and equipment supplied by manufacturers.

But not everyone is optimistic. Manufacturing trends can take decades to reverse, and job losses have continued to mount this year.