The debate continues on how much sugar is OK 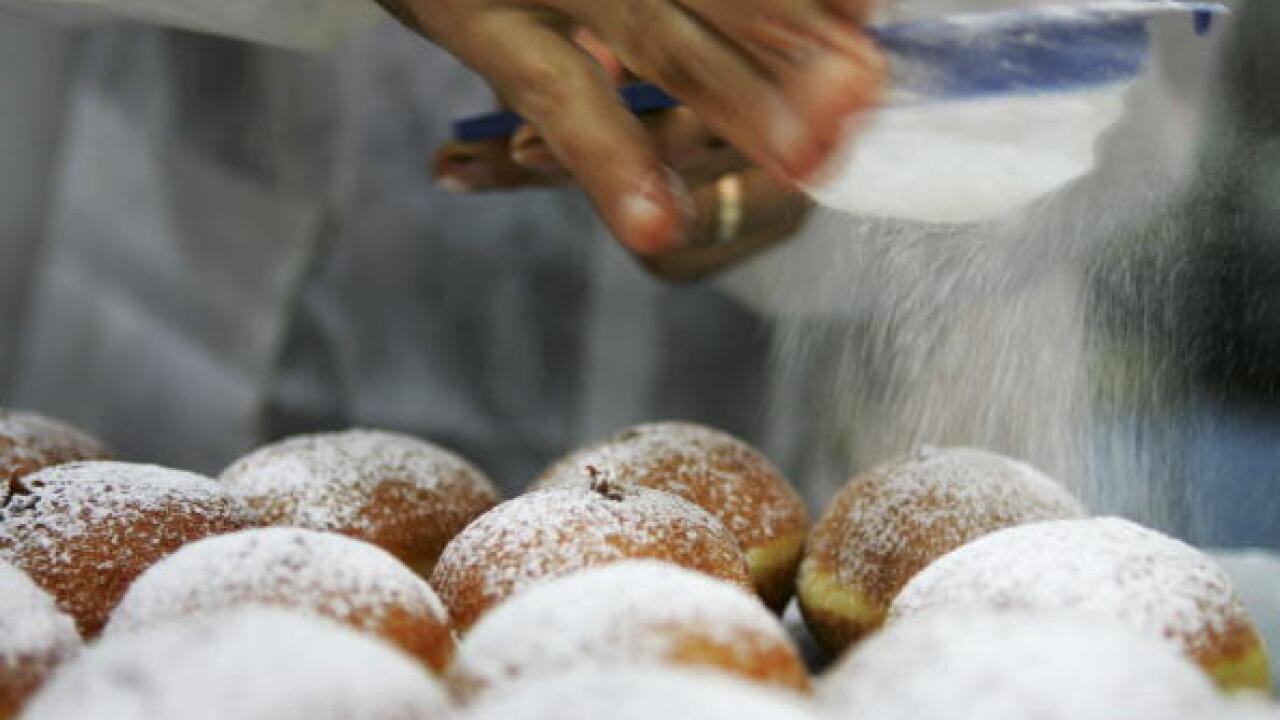 KADIMA, ISRAEL – DECEMBER 6: Fresh oil-fried doughnuts, called sufganiyot in Hebrew, are dusted with icing sugar before going on display at the Roladin bakery December 6, 2006 in Kadima in central Israel. In Jewish tradition, it is customary to eat the doughnuts and other foods fried in oil during the upcoming eight-day festival of Hanukkah. Also known as the Festival of Lights, Hanukkah commemorates the re-dedication of the Jewish Temple in Jerusalem in 165 BC following the victory of the Jewish Maccabees over the Seleucid Empire when there was only enough consecrated olive oil to fuel the eternal flame in the Temple for one day but miraculously, the oil burned for eight days. (Photo by David Silverman/Getty Images)

How many spoonfuls of sugar can you have in a day? The World Health Organization advises no more than about 6 teaspoons of added sugar — less than a can of soda. The same recommendation was made for children in a study published in the journal Circulation in August.

The US government put a limit on sugar for the first time in its 2015 dietary guidelines, recommending that added sugar should make up no more than 10% of your daily calories. For a 2,000-calorie-a-day diet, that would be 12 teaspoons.

Now, a review paper published in the journal Annals of Internal Medicine on Monday suggests that such guidelines might be wrong, saying they are based on low-quality evidence.

Current guidelines on dietary sugar fail to adhere to standards made by the American nongovernmental organization Institute of Medicine in 2011, said Bradley Johnston, a scientist at Toronto’s Hospital for Sick Children and an assistant professor in the department of clinical epidemiology and biostatistics at McMaster University in Canada. He was the senior corresponding author of the new paper.

“Although our findings question the specific sugar recommendations from guidelines produced by leading authorities, the findings should not be used to justify high or increased consumption of sugary foods and beverages,” Johnston said.

Rather, “results from our review should be used to promote improvement in the development of trustworthy guidelines on sugar intake,” he said. For instance, that there has been similar confusion over recommendations for how much water you should drink each day. “Some suggest eight glasses. However, we don’t really know. Perhaps it is 12 or six or four.”

Yet some experts argue that the new paper’s findings themselves should be questioned, especially because the review was funded by the North American branch of the International Life Sciences Institute, a nonprofit organization with ties to Coca-Cola, Hershey’s and other food companies.

“In essence, this study suggests that placing limits on ‘junk food’ is based on ‘junk science,’ a conclusion favorable to the junk food industry,” said Dr. Dean Schillinger, a professor of medicine at the University of California, San Francisco, who wrote an editorial that accompanied the new paper and outlined his concerns.

“Studies are more likely to conclude there is no relationship between sugar consumption and health outcomes when scientists receive financial support from food and beverage companies,” he said.

‘Guideline recommendations have to do a better job’

For the paper, Johnston and his colleagues reviewed nine separate guidelines on sugar made by health authorities from around the world between 1995 and 2016.

The researchers used two separate methods frequently employed in studies to rate the guidelines for trustworthiness and to assess their quality of evidence.

Using one of the methods, the researchers found that, for otherwise healthy members of the public, the overall quality of evidence to support recommendations made in the guidelines was low to very low.

“In other words, there is a lot of uncertainty around the recommended thresholds, especially for outcomes that are important to the public, (such as) obesity (and) type 2 diabetes,” Johnston said.

In the United States, dietary guidelines made by the federal government are released every five years, so consumers may have to wait until 2020 for new guidance.

A war against diabetes

Although all of the reviewed guidelines in the paper recommended a decrease in sugar consumption, “the rationale and evidence used to make each recommendation were inconsistent,” the researchers wrote.

But since the researchers reviewed guidelines published over a 20-year period, Schillinger said, they were likely to find inconsistencies. “It is widely known that science evolves over time,” Schillinger said.

“In addition, their claims regarding the low quality of guidelines are based on the application of inappropriate metrics,” he said. One of the methods the researchers used in the paper “is the wrong tool for the job and virtually guaranteed that they would falsely conclude that guidelines are of low quality,” Schillinger said.

Schillinger also pointed to the new paper’s funding as a major limitation, which has been seen before in the history of sugar research.

The Sugar Association, previously called the Sugar Research Foundation, funded studies on sugar health risks in the 1960s and ’70s, according to a historical analysis published online in the journal JAMA Internal Medicine in September.

Those previous studies promoted the consumption of fat as a primary risk factor for heart disease and avoided placing blame on sugar, according to the analysis.

A separate paper published in the American Journal of Preventive Medicine in October shed light on how Coca-Cola and PepsiCo have sponsored national health and medical organizations.

“Added sugars not only provide unnecessary and ’empty’ non-nutritious calories but also appear to affect unique and specific unhealthy metabolic pathways that contribute to obesity and diabetes and heart disease, irrespective of calories,” Schillinger said.

“We are in a public health war against diabetes, and we need to create smart strategies to win this war and prevent needless suffering and death. This is serious business,” he said.

“To illustrate the seriousness of the war on diabetes, in the first 10 years of the Iraq (and) Afghanistan war, about 1,500 US soldiers lost a limb in battle,” Schillinger said, citing a 2015 report (PDF) released by the Congressional Research Service.

In comparison, over the same time period, about 730,000 adults with diabetes lost limbs, Schillinger said. About 73,000 lower-limb amputations were performed in adults with diagnosed diabetes in 2010 alone, according to a 2014 National Diabetes Statistics Report (PDF).

“It is time we fought a home-front war against diabetes,” he said.

Schillinger added that he stands by current governmental guidelines recommending that added sugar should not exceed between 5% and 10% of your daily calories.

“This translates into about 80 to 160 calories derived from added sugars for a youth,” Schillinger said. He said that one can of soda contains about 150 calories worth of sugar.

The average percent of total daily calories from added sugars consumed among men and women between 2005 and 2010 was 13%, according to the Centers for Disease Control and Prevention.

“Were the public to believe and follow such guidelines, this would mean that profits for junk food companies would fall by half,” Schillinger said. “So there is both a lot of money and a lot of lives on the line.”