Homelessness declining in nation’s cities, but hunger is on the rise 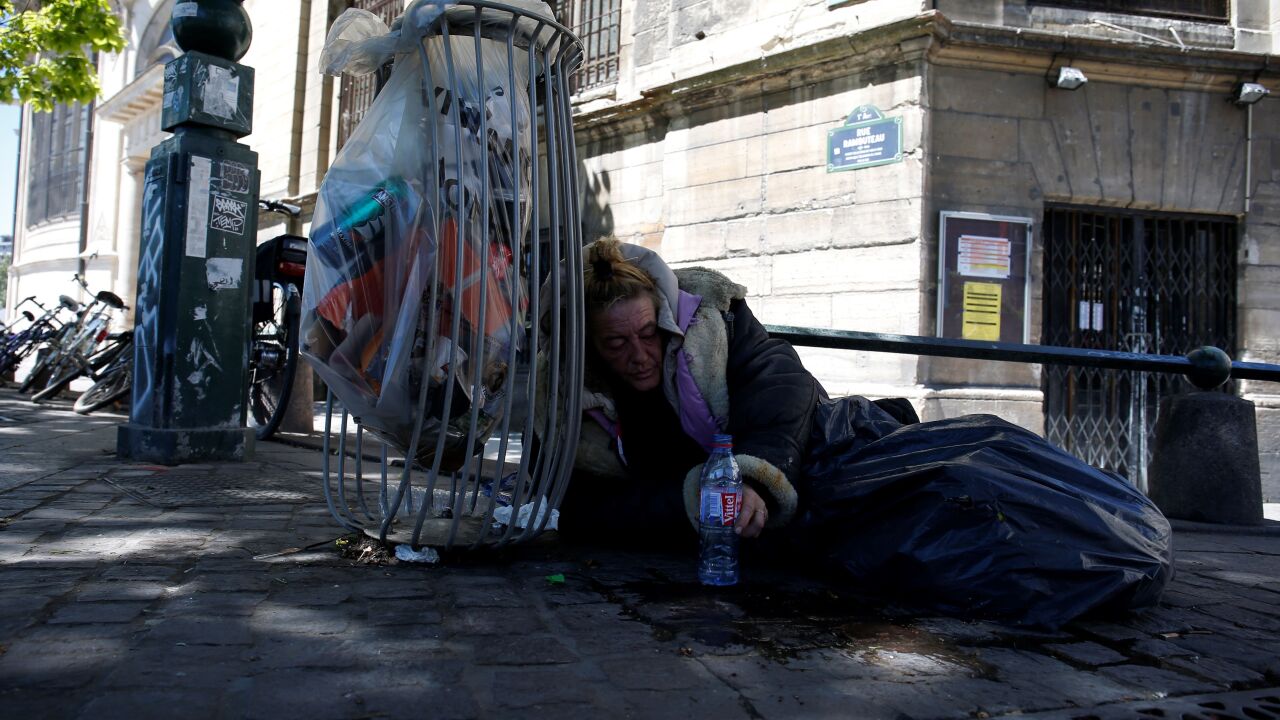 TO GO WITH AFP STORY BY PAULINE FROISSART A homeless woman lies on the ground in a street on July 19, 2016 in Paris. With the closing of numerous helping structures, shelters and the temperature rising, summer can be very hard for homeless people. If plenty of associations help the poorest during winter, their destiny concerns less during summer. However, when the mercury thermometer shows 40° the misery is not easier. / AFP / MATTHIEU ALEXANDRE (Photo credit should read MATTHIEU ALEXANDRE/AFP/Getty Images)

Even though homelessness in America’s cities continues to decline, food banks and pantries are still being stretched thin as the number of people seeking emergency food assistance climbs, according to a survey of mayors from 38 of the nation’s cities.

The number of people seeking emergency food assistance increased by an average of 2% in 2016, the United States Conference of Mayors said in its annual report Wednesday.

The majority, or 63%, of those seeking assistance were families, down from 67% a year ago, the survey found. However, the proportion of people who were employed and in need of food assistance rose sharply — increasing to 51% from 42%.

The primary cause of hunger, the mayors said: low wages.

“We’re looking at the wealth gap. Jobs in our cities are coming back, but they are not paying what they we’re paying before the meltdown,” said Mick Cornett, mayor of Oklahoma City.

High housing costs and poverty were also major reasons cited by the mayors.

“We’re talking about the working poor and we may be looking at people who are sheltered but spending more of their income on housing and seeking food assistance,” said Helene Schneider, mayor of Santa Barbara.

The growing number of hungry has put a strain on city food banks and pantries.

Nearly half of cities said they had to reduce the quantity of food an individual or a family could receive per pantry visit or the food received per meal. Due to a lack of resources, 47% of the cities said emergency food facilities had to turn people away altogether, a slight improvement from the 57% who said they had to do so a year prior.

Washington, D.C., estimated that the city was unable to meet nearly 24% of the overall demand for food assistance in 2016. Meanwhile, Des Moines said it could not meet 22% of the demand at its food pantries and kitchens.

One glimmer of hope: The homelessness rate continued to decline.

Approximately two-thirds of the cities surveyed by the Council of Mayors reported decreases in the rate of homelessness from 2009 to 2016. The largest reported decrease was in New York City, with 1,800 fewer homeless people, the report said.

About 5% of homeless people were veterans, the U.S. Conference of Mayors reported. With Durham, North Carolina, and Indianapolis reporting the highest proportion of homeless veterans.

The Council of Mayors stressed that the report on their cities doesn’t necessarily reflect national trends, however. Nationally, 7.2% of homeless people are identified as veterans, they said.

A shift in policy away from transitional housing toward more permanent housing since 2009 has helped reduce the numbers of homeless people living in U.S. cities. However, there is more to be done. The mayors reported that even if every one of their cities’ shelter beds were filled, more than 34,000 people would still lack shelter.

City officials overwhelmingly said housing assistance and affordable housing were what is needed most to reduce homelessness. They also want better employment and training, and better coordination with mental health and substance abuse services.

With about a month before the inauguration of President-elect Donald Trump, the mayors stressed the need for continued collaboration between federal, state and local governments.

“We look forward to meeting with the president-elect and his cabinet at our upcoming [Conference of Mayors] meeting on January 17th in D.C.,” said Mitch Landrieu, mayor of New Orleans. “These are bipartisan issues and we will do everything we can to support these people with a strong federal partnership.”