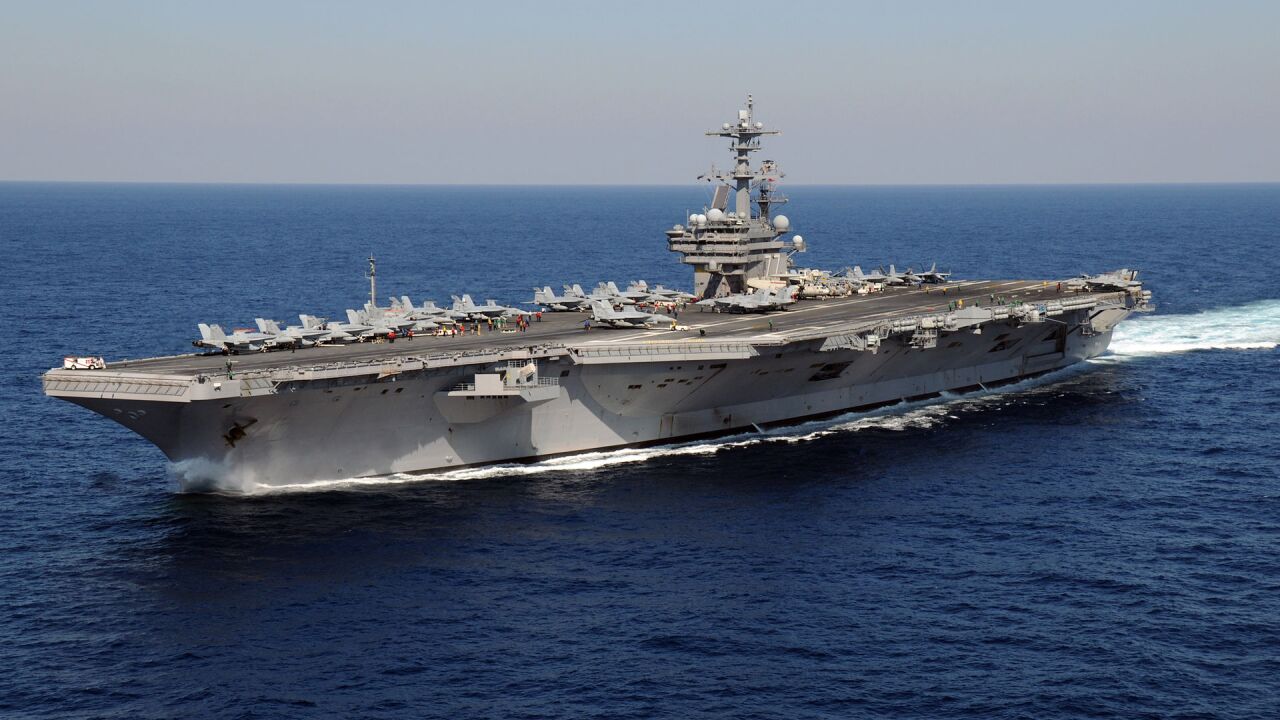 On August 8, 2014, jets carried out the first American airstrikes against ISIS.

Those American warplanes flew from the USS George H.W. Bush, one of the Navy’s 10 aircraft carriers.

Back then ISIS was making a lightning dash across Iraq and Syria, seizing town after town and threatening to wipe out entire communities of Iraqi minorities.

“Today I authorized two operations in Iraq — targeted airstrikes to protect our American personnel, and a humanitarian effort to help save thousands of Iraqi civilians who are trapped on a mountain,” President Barack Obama said at the time.

Now, more than two years and over 16,000 airstrikes later, the Bush and its crew are once again making preparations to head to the region. There, they will likely take part once more in the fight against the terror group.

A CNN crew got to fly out to the nuclear-powered aircraft carrier Wednesday and witness its pilots and crew train for their upcoming deployment to the region.

But this time around the US forces aboard could be facing a much different enemy.

ISIS is desperately fighting to hold on to Mosul, its last city in Iraq, and anti-ISIS Syrian Democratic Forces, backed by US airpower, have come within 20 miles of the terror organization’s self-declared capital in Raqqa, Syria.

It’s a far cry from 2014, when ISIS leader Abu Bakr al-Baghdadi declared a caliphate in Mosul and analysts questioned whether the group’s fighters might march on Irbil and Baghdad.

“The enemy has proven that they have some persistency to them,” Rear Adm. Kenneth Whitesell, commander of the Carrier Strike Group 2, told CNN.

“It doesn’t surprise me that we are going back two and a half years later, we’re going back with increased capabilities, and if we have to go back two years from now (we’ll) go back with all new capabilities that they’re not expecting to see,” he added.

“The environment essentially hasn’t changed since the George Herbert Walker Bush did the first strikes in 2014,” he said, noting that strike group was well prepared to take over operations in the eastern Mediterranean from the French aircraft carrier Charles de Gaulle, which is currently conducting airstrikes against ISIS.

“We’ll be coordinating with them on lessons learned on how they conducted operations,” Whitesell said, adding that he had been in close contact with his French counterpart.

“We’re in correspondence now on how he is moving his ship and how he is operating his air wing,” Whitesell continued. “He speaks the same language I speak when it comes to power projection.”

The Bush is one of the newest carriers in the US fleet and the last of its type, with a complement of some 65 aircraft, including F/A-18 Super Hornets, EA-18G Growlers and helicopters.

But this time around, not all the ships in the area will necessarily be on America’s side.

The Russians have dispatched their own aircraft carrier, the Adm. Kuznetsov, to the waters off the coast of Syria, and boats belonging to the Iranian Revolutionary Guard Corps continue to harass US ships in the region.

Speaking to CNN on the Bush’s bridge, the ship’s commanding officer, Capt. Will Pennington, told CNN that the crew was training to meet a range of threats, from violent extremists to increasingly capable forces belonging to other nations in the region.

Anti-piracy and humanitarian missions were also something the ship had to anticipate, he added.

“What we are out here doing is working hard to make sure that we are prepared to accomplish all of those missions,” Pennington said.

This deployment will also see the approximately 5,000 men and women aboard away from their families for about eight months.

The personnel aboard sleep in tight quarters with some of the flight deck crews working 13- to 16-hour-long shifts in order to keep the decades-old aircraft fit to fight.

“That’s what makes this whole business hum, because the folks down here are turning wrenches, doing the hard troubleshooting and making sure that these assets are ready to go,” he added.

After the training is completed, the crew members will have the chance to spend the holidays with their families before shipping out to the area of operations in early 2017, around the same time Donald Trump will become the nation’s new commander in chief.

Dozens of jets practiced landing on the deck Wednesday, a procedure that is considered a challenging task for a new pilot. Because of its short runway, planes need to be decelerated by an “arresting wire” that is laid across the deck.

Visitors to the carrier aboard the C-2 Greyhound aircraft can feel their plane descending on approach and it touching down only to stop instantly as the plane halts after catching the wire. Some describe the experience as feeling like a crash landing.

Similarly on takeoff, a light comes on saying “prepare for catapult,” while moments later passengers feel the effects of the catapult as the plane they’re sitting in goes from a dead stop to 120 mph in about three seconds.

McCall said that about 100 pilots would participate in the day and night landings as part of what he called their “final exam before we deploy.”