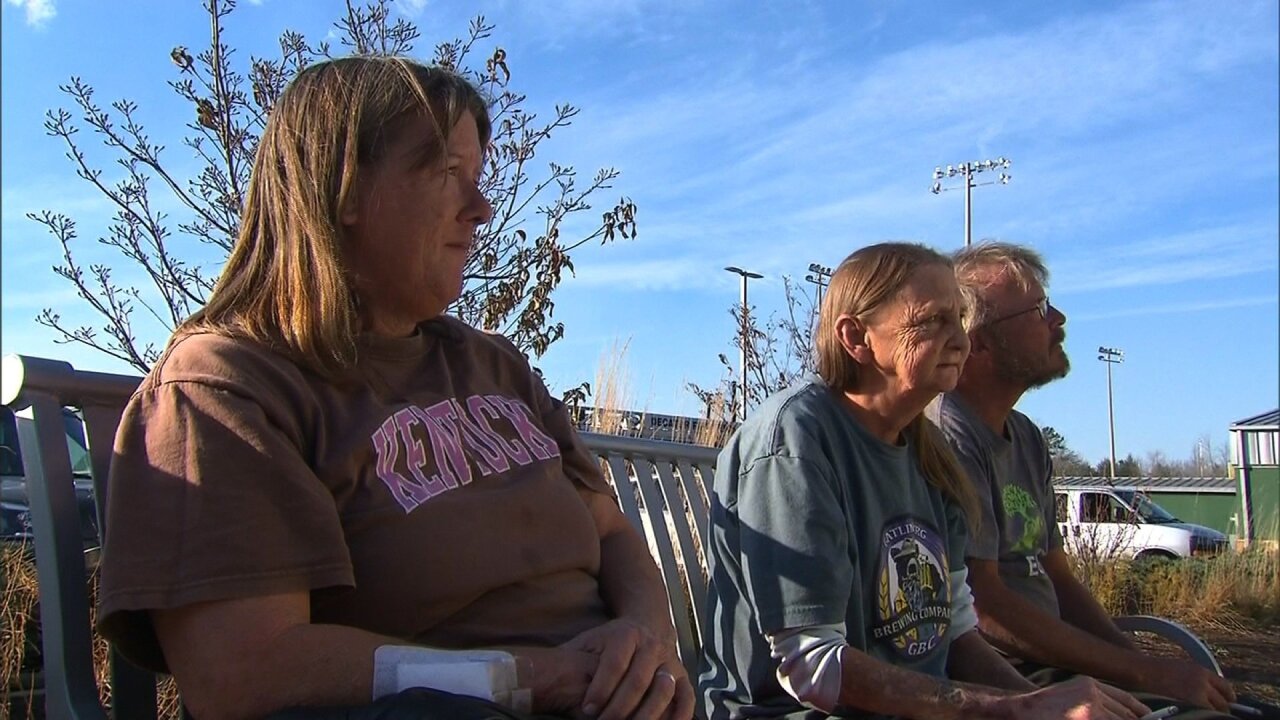 Denise Bearden and her fiancé Mark Benzschawel were asleep when the wildfire burned dangerously close to their home. Luckily, police pounded on their door just in time.

GATLINBURG, Tenn. – Michael Reed still doesn’t know where his wife and daughters are — or whether they escaped alive.

The wildfires sweeping eastern Tennessee — which claimed three lives in separate locations — engulfed his Gatlinburg home while he and his son were away. It’s not certain whether Reed’s wife, Constance, and daughters Chloe and Lily fled the house in time.

The inferno spread quickly, and with little warning. When Reed heard about the wildfire, he and his son tried to drive back to town.

“We got stuck in traffic at that point, and they wouldn’t let us turn around,” he said.

Reed wasn’t able to get his wife and daughters. He’s haunted by the last conversation he had with his wife.

“She called me about 8:15 (Monday) and said that there were flames across the street from our house, and she didn’t know what to do,” Reed said, his voice quivering.

Eventually, Reed “snuck back into Gatlinburg.” But by then, his house was engulfed in flames.

Reed has frantically asked shelters if his wife and daughters were there — but so far, to no avail.

Denise Bearden and her fiancé Mark Benzschawel were asleep when the wildfire burned dangerously close to their home.
Luckily, police pounded on their door just in time.

Denise Bearden and her fiancé Mark Benzschawel were asleep when the wildfire burned dangerously close to their home.

Luckily, police pounded on their door just in time.

“We know that if they wouldn’t have woke us up, we’d probably be dead,” Benzschawel said. “As soon as I looked out the window to see who it was, there was just fire surrounding us.”

The couple rushed into the back of a patrol car and police drove them to safety. Along the way, they saw a nightmarish scene outside the car windows.

“There was fire out of both sides … it was crossing the street, ” Benzschawel said. “We didn’t think we’d make it.”

The couple are now staying at an evacuation shelter. They’re not sure when they’ll be able to go home.

Even when that happens, Bearden said, “We’re not sure if our place will still be there or not.”

Watering down the house

Gary Owenby was born and raised in Gatlinburg. His final memories of his home included dousing it with water to try to save it from the raging inferno.

“You could see the fire coming down the ridge,” Owenby told HLN. “And as it grew closer, we were watering the house down, packing, stowing stuff in the car, trying to get the animals.”

Denise Bearden and her fiancé Mark Benzschawel were asleep when the wildfire burned dangerously close to their home.
Luckily, police pounded on their door just in time.

He has no idea if it worked; Owenby fled to an emergency shelter. On Tuesday, standing outside in the rain, he seemed more grateful than distraught.

“We’re thankful to be alive,” he said. “No one here could imagine this — in this beautiful area. And we’re so thankful for the rain. We have no way of knowing if we have a home to go back to. That’s not important. The lives are important.”

He’s also come to terms with the possibility all his belongings are gone. And he’s OK with that.

“The things I’ve known probably don’t exist anymore. And I can just close my eyes and have that memory in my heart. That will last.”

He said he had one request for the public: “I just ask everybody out there to pray for us. That’s the one thing I know that will work. God will take care of the rest.”

Guests at Gatlinburg’s Park Vista Hotel tried to flee from the wildfire — only to find themselves trapped.

“The only road to get down from the hotel, trees had fallen down in the road and were just engulfed in flames,” guest Logan Baker told WATE. “Then the flames came up into the parking lot.”

Baker said firefighters told him it wasn’t safe to leave.

“We can’t go outside,” Baker told WATE. “The firefighters said the wind is blowing at 80 miles per hour, and the debris in the air (makes it) too hard to get us down right now.”

But before long, the hotel filled with smoke from the nearby inferno. Baker said firefighters busted open windows of the top floors to allow smoke to escape.

As he looked out from his hotel, Baker said all the trees around him were burnt. He said he could also see a spate of small fires in downtown Gatlinburg.

“It’s just engulfed,” he said. “I am also looking at the hillside past downtown Gatlinburg, and I can see cabins on fire.”