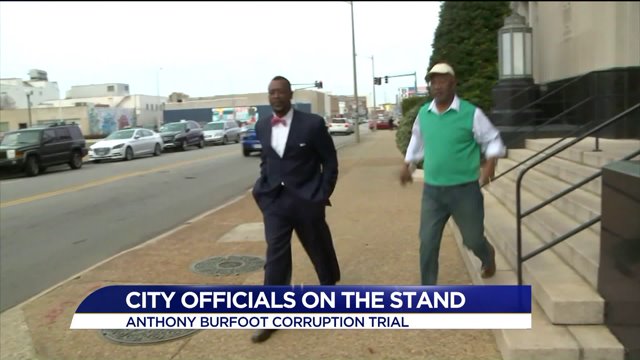 Jones said Monday is his last day serving the city of Norfolk. He took a job in Charlotte and has been serving since 2011. Jones told the jury he has never seen or heard Burfoot ask for special treatment for any developer or businessman.

News 3 asked Jones about the trial after he left court but he said couldn’t talk about it. He did add that he is going to miss the city and the people he has met.

When asked about Tommy Arney, a key witness for the prosecution, Hall said they did not have a good relationship from prior dealings. Hall described Arney as aggressive and belligerent in court and the judge responded by saying that is not an appropriate way respond to the question.

The prosecution asked Pishko about his prior dealings with Burfoot, but the judge did not let them proceed with certain questions. Pishko described Burfoot as a friend.

Burfoot’s sister, Lisa Smith also took the stand. She said she never saw anyone doing renovations to her brother’s home besides the family’s plumber, Burfoot or Smith’s late husband.

Federal prosecutors allege that Burfoot took almost a half a million dollars in cash, renovations to his home, appliances, a Mercedes, and access to a beach house all in exchange for his support on city council.

Dwight Ethridge, Ronnie Boone, and Tommy Arney all took the stand and testified they bribed Burfoot for several years in separate situations.

Defense Attorney Andrew Sacks said there are at least 25 more witnesses expected to take the stand.

Under cross-examination, Winn told the jury he made a joke that Burfoot never pays for a drink on Granby Street.  He said he was friends with Burfoot.

Delegate Hester said she is friends with Burfoot and didn’t want to see him in trouble, but also testified that she would never lie on the stand to protect him. She said he never asked her for special treatment when it came to Boone, Etheridge, Arney or Tivest.

Prosecutors allege Burfoot had Ethridge pay $1,000 for a car loan, stayed at Ronnie Boone’s beach house, and had the group Tivest pay for $13,000 in appliances for Burfoot’s house.

Fraim testified, “of course” that information like that should have been disclosed under the current laws. However, he said he never saw any of the alleged activity and was never pressured to vote in support of Burfoot’s alleged business associates.

Burfoot is on trial for perjury and political corruption.

The defense said the accusations are lies. “The case has a tremendous amount of weakness to it.  It has not been the overwhelming hammer that the indictment suggested initially that it would,” said Sacks.

Prosecutors alleged that a lot of the corruption was going on when Burfoot was a councilman and vice mayor.