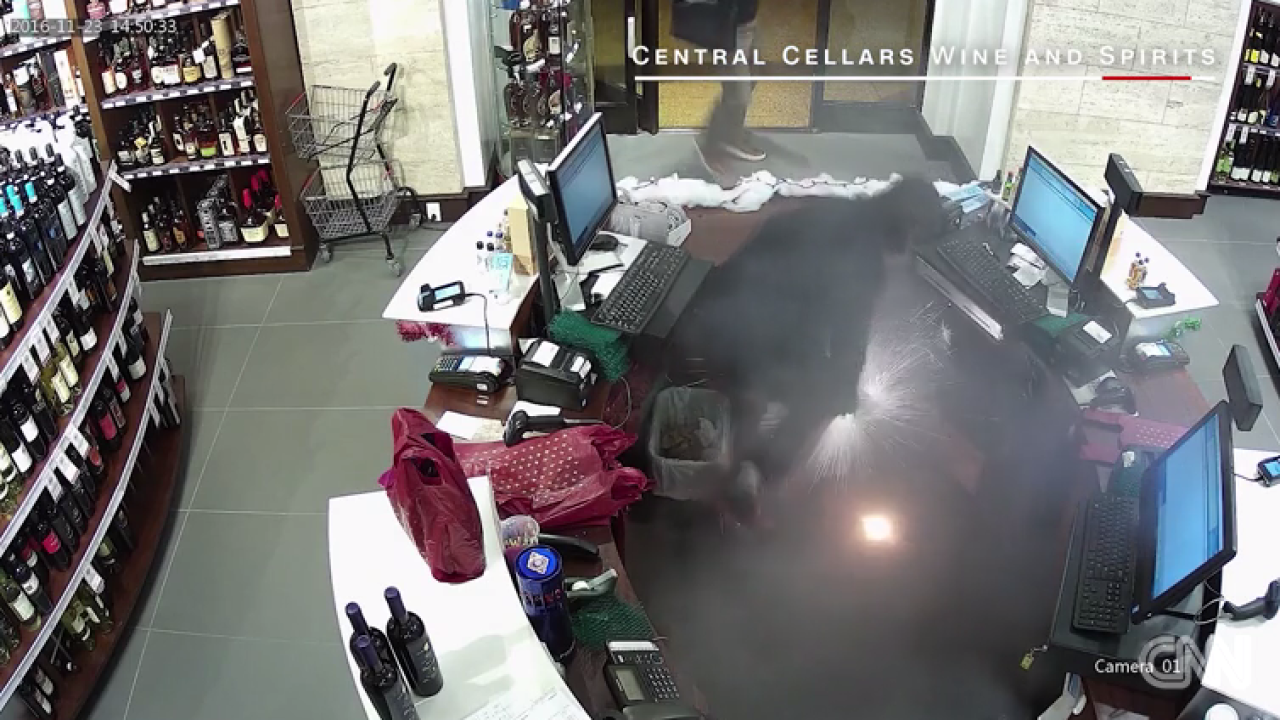 An e-cigarette exploded in the pocket of an employee at a New York City wine store Wednesday, badly burning the man, his attorney said.

Otis Gooding, 31, was standing behind the store counter and talking with co-workers when the e-cigarette exploded, burning his leg, thigh and hand, said attorney Sanford Rubenstein.

Security camera video obtained from the store shows Gooding jumping as sparks begin shooting from his pants pocket. Smoke billows from his pants as he attempts to remove the device.

Gooding suffered third-degree burns and was admitted to the Weill Cornell Medical Center burn unit, where he is expected to have surgery, Rubenstein said.

No one else was injured during the incident, though co-workers who witnessed the explosion said they were still “shaken up” by what happened.

John Lee, another employee of Central Cellars Wine and Spirits, in Grand Central Terminal, said he ran behind a pillar in the store once the sparks started flying.

“Unfortunately there was nothing we could do but call the police,” Lee told CNN. “Otis ran water on himself till the paramedics came. I was traumatized to see someone hurt that way,” Lee said.

Lee, a former e-cigarette smoker himself, said the device had been customized. “I’ve never seen one that has so much power, it’s aftermarket customized so you can change the voltage for high performances,” he said.

There have been a number of reports of similar incidents involving e-cigarettes. In May, a vaporizer blew up in a young man’s face in New York, knocking out teeth, ripping a hole in his tongue and leaving his hands covered in burns.

Earlier that month, an Alabama teen was burned after a classmate’s e-cigarette exploded and sent a hot battery flying into his face. In February, dramatic gas station security footage showed a man’s leg being engulfed by flames as a result of another apparent e-cigarette explosion.

According to his attorney, Gooding is currently in a lot of pain, and disappointed that he will not be able to spend Thanksgiving with his family. His next step will be taking appropriate legal action against the device’s manufacturer, once identified, Rubenstein said.

Calls for comment from the Tobacco Vapor Electronic Cigarette Association and the Smoke Free Alternatives Trade Association were not immediately returned.