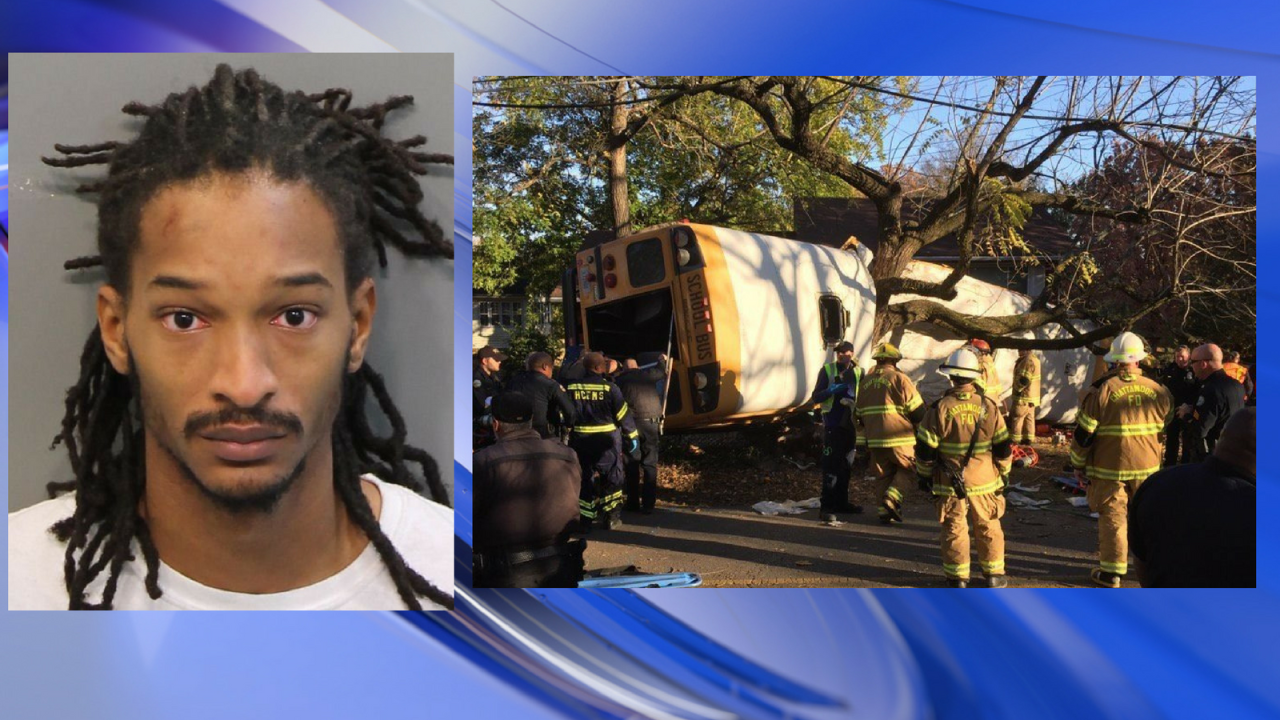 A school bus packed with children slammed into a tree, flipped over and split apart.

Shell-shocked students and parents cried as rescuers worked for hours to pull them from the wreckage.

This was the horrifying scene Monday afternoon on a street in Chattanooga, Tennessee. By Tuesday evening, the initial shock had given way to mourning and healing.

On Wednesday Chattanooga Police said another child had passed away.

At least six children were killed in the crash, school officials said, and five others are hospitalized in an intensive care unit.

“Five is a cursed number in our city right now,” Mayor Andy Berke said. “The most unnatural thing in the world is for a parent to mourn the loss of a child.”

Meanwhile, the investigation continues into the cause of the crash and the driver, 24-year-old Johnthony Walker, who has been arrested on vehicular homicide charges.

Crowds gathered throughout Tuesday at a makeshift memorial. At sunset the community gathered at Woodmore Elementary School for a memorial.

The bus left school Monday afternoon with 37 students and did not make any stops before the crash, National Transportation Safety Board Chairman Christopher A. Hart said in a news conference Tuesday.

Staff treated and released 19 patients Monday, most within two hours of their arrival. As of Tuesday afternoon, 12 patients remained, six in critical care and six stable. One child was sent to the adult emergency room and was released from there.

Donations of blood and money poured in; well-wishers in Ohio delivered hundreds of boxes of pizza to the hospital.

At one point on Tuesday more than 800 people filled waiting rooms and common areas, waiting for their child’s name to be called. The task of identifying children was complicated by their school uniforms, age and traumatized condition. Many children were unable to spell their names; some did not know their last names or their parents’ names and could only answer “mama” when asked.

Medics rushed nearly two dozen people to hospitals in Chattanooga on Monday after a school bus crashed in the Tennessee city, officials said. The bus appears to have slammed into a tree and looks like it was split apart.

Parents who had pictures of their children on their cellphones gave them to staff to identify them, Keys said. They were assisted by school staff, pastors and police.

One teacher helped staff identify a student who did not survive with a picture she had taken at school Monday during a Thanksgiving lunch celebration. The picture of the smiling child brought a moment of happiness to the grieving family, Keys said.

“I think it was helpful for the family to know what one of [the child’s] the last moments might have been like,” Keys said.

‘My baby was gone’

While some families left the hospital Tuesday reunited with their children, not everyone was so lucky.

She went to the scene, and knew D’Myunn would be sitting at the front of the bus. That’s where he always sat. She saw him there, day after day, when she picked him up from the bus stop.

It wasn’t until hours later, Brown said, that authorities at the hospital told her that her son had died.

“There was nothing that they could do for him,” she said, sobbing. “It just took so long for me to find out that my baby was gone. He was my only child.”

Of the five children confirmed dead after Monday’s crash, three were fourth-graders, one was a first-grader and one was a kindergartner.

A National Transportation Safety Board team arrived in Chattanooga on Tuesday morning to investigate the crash.

The school bus was heading down a narrow and winding road Monday afternoon well above the speed limit of 30 mph, according to an arrest affidavit.

“Mr. Walker lost control of the bus and swerved off of the roadway to the right, striking an elevated driveway and mailbox, swerved to the left and began to overturn, striking a telephone pole and a tree,” the affidavit says.

The NTSB plans to speak with a witness who was driving behind the bus, said Hart, the NTSB chairman. Investigators also plan to review video from two cameras on the bus, one rear-facing and one forward-facing.

The bus did not have seat belts but it takes more than seat belts to prevent injuries, Hart said. The NTSB will be looking into what else could have been done to contain the scope of damage and injuries.

“We still need to be concerned with the totality of the safety inside the the bus,” he said.

Bus driver’s mother: ‘He was terrified’

The NTSB also plans to speak with the driver, who has been charged with five counts of vehicular homicide, reckless endangerment and reckless driving.

Medics rushed nearly two dozen people to hospitals in Chattanooga on Monday after a school bus crashed in the Tennessee city, officials said. The bus appears to have slammed into a tree and looks like it was split apart.

Walker received his commercial driver’s license in April, Hart said. Since then, records show he received a traffic citation for side-swiping a car in September while driving a school bus.

After the crash, Walker’s mother said she got a phone call from her son, who told her he’d been in a “drastic accident” and tried to explain what had happened before police took his phone away.

“When he talked to me, he was terrified,” Gwenevere Cook said.

“He was trying to get them (children) off the bus — all the bodies were limp. There was blood everywhere. He has been cooperating with the police. He texted me minutes later saying the kids are dead,” she said.

Cook expressed condolences to the victims’ families and asked for compassion for her son, describing him as a respected man and a father of a 3-year-old son who worked two jobs and had never been in trouble before.

“It is a horrible nightmare,” Cook said. “I feel bad for my son, and I am torn up for the (victims’) family members.”

The company that operated the bus and employed Walker has come under scrutiny.

Durham School Services, a company that transports more than 1 million students daily at schools across the United States, said it was working with police and school officials to investigate.

Neither the city of Chattanooga nor its schools interacts with the company, Chattanooga Mayor Berke said. Hamilton County runs the bus system.

The company’s website — which normally depicts smiling children and bright yellow school buses beside a pledge about getting students to school safely — was black on Tuesday, greeting visitors with a somber statement about the Chattanooga crash.

“Our entire team at Durham School Services is devastated by the accident yesterday that tragically claimed the lives of Chattanooga students,” the statement said.