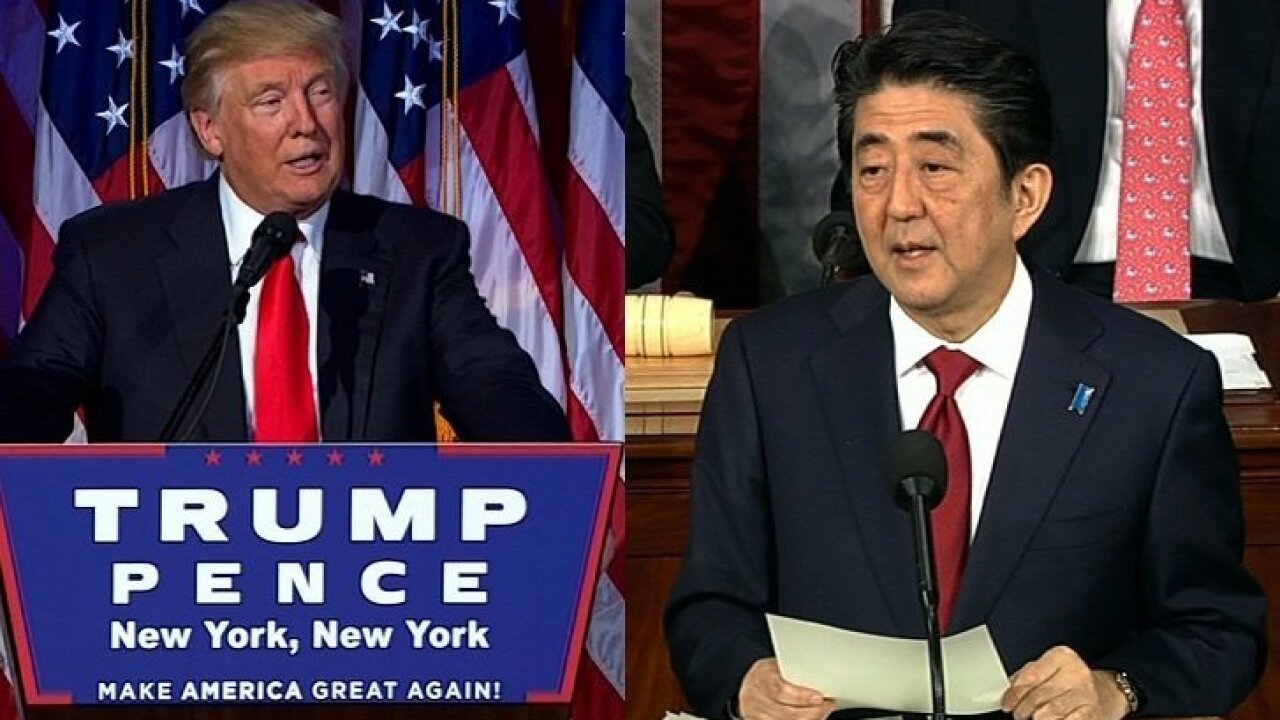 Japan’s Prime Minister Shinzo Abe says he wants to “build trust” with US President-elect Donald Trump when the two meet in New York Thursday, as he seeks to safeguard the long-standing alliance between the two countries.

The pair met in New York in an “unofficial” capacity, Abe told reporters, as Trump has not yet assumed the presidency.

Abe stressed that he emerged feeling that the US and Japan will be able to maintain a “relationship of trust” with Trump as president.

The sit-down with Abe was Trump’s first in-person meeting with a foreign head of state since he clinched the presidency last week.

It comes after Trump’s repeated suggestions during the campaign that Japan should shoulder a bigger financial burden regarding US military forces stationed in the region.

The Japanese government released several photos of Trump and Abe, some of which included Jared Kushner, Ivanka Trump and retired Lt. General Michael Flynn. It is not known what role the three played in the meeting.

CNN is not publishing or airing these photos because news organizations were denied access to the meeting.

“I am very honored to see the President elect ahead of other world leaders,” Abe told reporters before his departure.

“The Japan-US alliance is the axis of Japan’s diplomacy and security. The alliance becomes alive only when there is trust between us.”

While vague, this statement would be reassuring to the Japanese public, Jeffery Kingston, director of Asian studies at Japan’s Temple University, told CNN.

“Abe has invested a lot of critical capital in strengthening alliance with the US, and would have been worried to see his entire agenda go up in the air,” he said.

“By meeting Trump, Abe wants to show the rest of the world that the US and Japan still stand side by side.”

A top aide to Abe, Katsuyuki Kawai, said that he’d been told by members of Trump’s transition team that Trump’s previous remarks should not be taken literally.

Abe declined to say if the two men hashed out the defense issue or discussed their disagreement over the Trans-Pacific Partnership (TPP) trade deal, but stressed that he emerged “convinced that Mr. Trump is a leader in whom I can have confidence.”

“I conveyed my various views on different issues, but since he hasn’t assumed the office, I would like to refrain from touching on details,” Abe said.

During the campaign, Trump alarmed Japan and South Korea, two of America’s strongest allies, by suggesting they were free-riding on US security commitments.

Particularly jaw-dropping were the suggestions that Japan, which until last year had a pacifist constitution, should obtain nuclear weapons to protect itself from North Korea.

Abe’s meeting with the President-elect “sends a reassuring signal that despite Trump’s rhetoric, things remain more or less on track,” Kingston said.

Brad Williams, a professor of international relations at the City University of Hong Kong, told CNN that the early meeting was brought on in part from Japanese concern for the future of the US-Japanese alliance and also owing to practical concerns.

“Abe is on the way to the APEC summits, so he would have flown through the US anyway,” he said.

Koichi Nakano, a political scientist at Sophia University was more skeptical of the Trump-Abe meeting. Nakano told CNN that the Japanese administration had rushed to see Trump even before he assumed office while he was busy forming a new admnistration.

“What is there to gain, I have no idea?” said Nakano. “(Abe) is not talking to a president yet.”

How future relations between Abe and Trump will play out remain to be seen. Kingston, however, suggested that the Trump-Abe relationship could be off to a good start given the kind of leaders Abe looks favorably on.

“If you look at who Abe admires around the world, he likes strong leaders like Putin, Modi and Erdogan, who have despotic tendencies,” he said.