Protests and student walkouts mark the week after Trump’s win 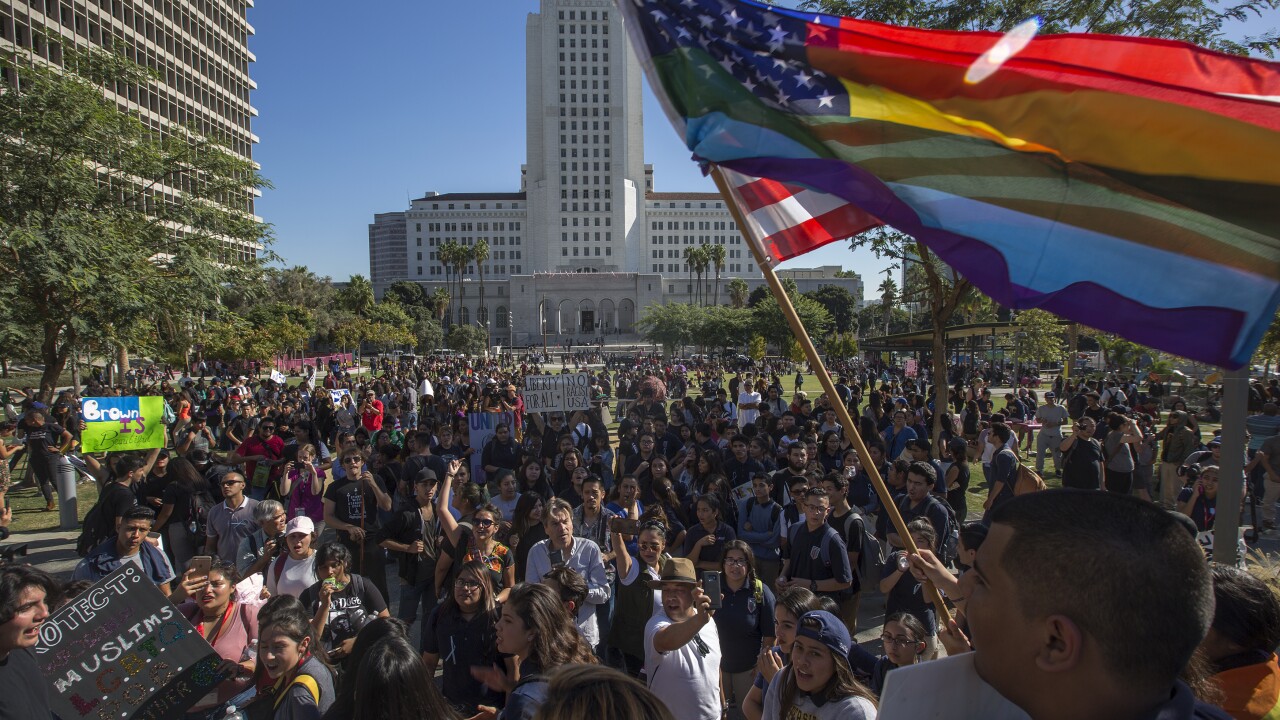 Students from numerous area high schools walk out of class to protest march and near City Hall against the upset election of Republican Donald Trump over Democrat Hillary Clinton in the race for President of the United States on November 14, 2016 in Los Angeles, California, United States. The mostly Latino youth walked out of class to protest because they are afraid that their families could be split up through mass deportations of millions of immigrants, as promised by Trump during his campaign. (Photo by David McNew/Getty Images)

Every day in the week since Donald Trump pulled off a stunning presidential election victory, protests have broken out across the country with demonstrators chanting, “Not my president” and “Love trumps hate.”

On Monday, thousands of high schoolers in multiple cities walked out of class in protest. Many were too young to cast a ballot. Similar demonstrations are expected to continue Tuesday on college campuses.

Many protesters said they harbor no illusions about reversing the outcome of the election. They do hope that Trump and his supporters will ease their hardline rhetoric on several flashpoint issues — including immigration and possible mass deportations, Muslim bans and LGBTQ rights.

Protests have popped up in cities across the country, including New York, Chicago, Portland, Seattle and Los Angeles. Some demonstrations have broken out in front of Trump properties.

When Trump was asked about the protesters in an interview that aired on “60 Minutes” Sunday, he said: “I just think they don’t know me.”

He added: “I think in some cases, you have professional protesters.”

Critics accuse the anti-Trump protesters of being sore losers and slam students for skipping classes.

Since Election Day, many have expressed fears of bigotry and racial violence against minorities, amid incidents of harassment, slurs and hate crimes.

‘All this hate is out there, and it might be more blatant than it’s usually been. This is a reminder that we have to keep fighting,” said Trinity Goss, a protest organizer at the University of Arizona.

Most of the protests have been peaceful. But Portland, Oregon, has been the site of the most violent anti-Trump demonstrations, with a shooting and the arrest of 71 people on Saturday.

Since protests broke out, Portland Police have arrested more than 100 people. The police and the district attorney’s office announced Monday that nearly all would receive traffic citations rather than getting charged — for now. “The sheer number of arrests during protests over the last several days has been an exceptional event,” according to their statement.

Investigators have to go through all the evidence and, once reports have been made to the district attorney’s office, the protesters who had been arrested could face prosecution, according to the statement.

Vincenzo Milione, who was arrested Thursday night, told CNN affiliate KPTV that the cause was worth getting arrested.

“I will continue to protest and use my First Amendment rights,” he said.

On Monday, thousands of high school students ditched class to stage anti-Trump walkouts in several states across the country — including Maryland, California and Oregon.

Hundreds of high school students from at least six schools in East Los Angeles, home to a large Latino population, took to the streets chanting “No papers, no fear” and “Say it loud, say it clear, immigrants are welcome here.”

Mendez High School student Arlene Contreras was one of the students holding a rainbow-colored sign in support of LGBTQ rights and civil rights of minority groups.