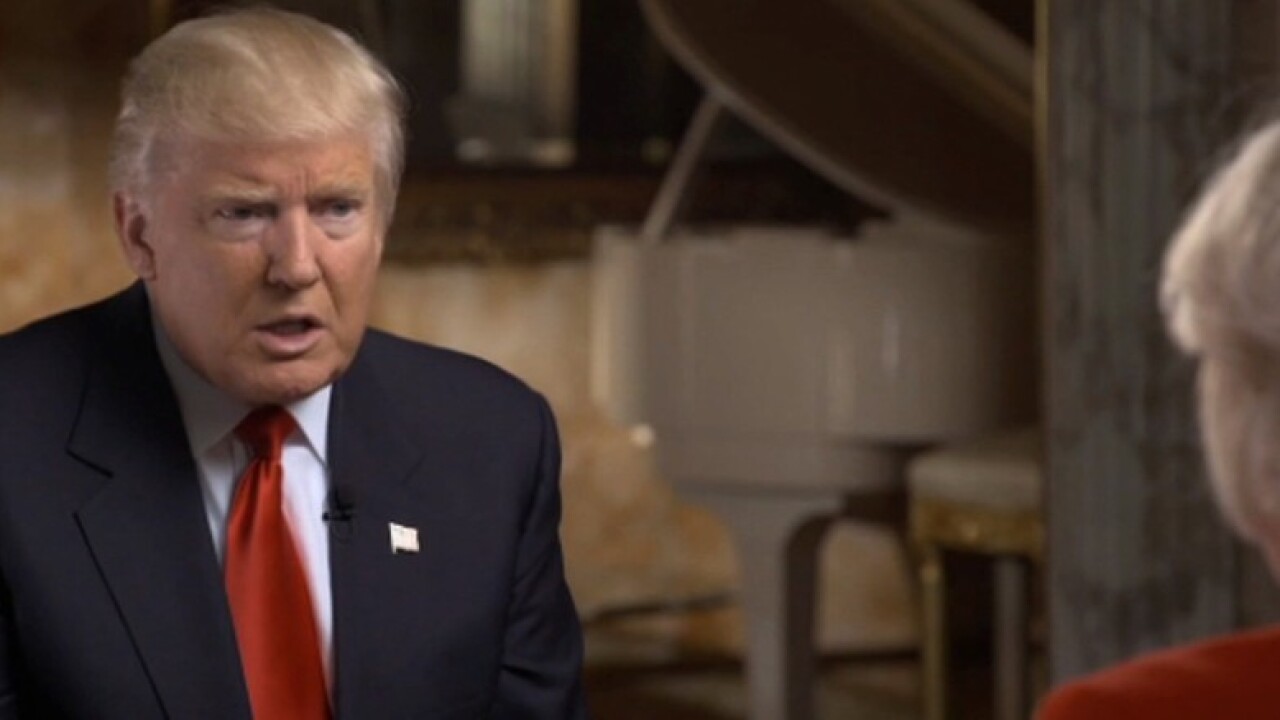 Donald Trump on Sunday told his supporters to stop harassing minorities, in his first televised sit-down interview since becoming President-elect.

“I am so saddened to hear that,” Trump told CBS’ Lesley Stahl on “60 Minutes” when she said Latinos and Muslims are facing harassment. “And I say, ‘Stop it.’ If it — if it helps, I will say this, and I will say right to the cameras: ‘Stop it.'”

Trump directed his comments to his own supporters whom Stahl said have written racist slogans or chanted degrading messages — particularly in schools. It was a powerful appeal to a nation ripped apart by the divisive 2016 campaign. Trump’s election has left Democrats angry and many minorities fearful about the future.

Yet Trump also criticized the protests that have broken out in cities across the United States since his defeat of Hillary Clinton on Tuesday.

Trump said he’s seen “a very small amount” — including “one or two instances” — of racial slurs being directed at minorities, particularly in largely white schools, since his election.

“I would say don’t do it, that’s terrible, because I’m going to bring this country together,” Trump said.

As for anti-Trump protests, Trump said, “I think it’s horrible if that’s happening. I think it’s built up by the press because, frankly, they’ll take every single little incident that they can find in this country, which could’ve been there before. If I weren’t even around doing this, and they’ll make into an event because that’s the way the press is.”

In the wide-ranging interview Trump also said he’s still deciding whether to ask FBI Director James Comey for his resignation.

Trump demurred when asked about his plans for Comey — whose decision to end the investigation into Hillary Clinton’s private email server was widely panned by Republicans.

“I think that I would rather not comment on that yet,” Trump said. “I haven’t made up my mind. I respect him a lot. I respect the FBI a lot. … There’s been a lot of leaking, there’s no question about that. But I would certainly like to talk to him.”

He admitted he isn’t sure about Comey’s future. “I’d want to see, you know, he may have had very good reasons for doing what he did,” Trump said. Comey has more than six years to go in his ten-year term.

Trump also balked when asked whether he’d carry out his campaign pledge to appoint a special prosecutor to investigate Clinton.

He said Clinton “did some bad things” and that he’s “going to think about it” — but that he is more eager to focus on health care, immigration and other policy matters.

Hillary Clinton has cited Comey’s late-campaign season disclosures as a reason for her loss. The former secretary of state told donors in a conference call Saturday that Comey delivered a double whammy to her candidacy in the final days of the campaign by taking another look at emails related to Clinton’s private server before abruptly saying he found no wrongdoing.

In the interview, Trump also discussed lobbyists’ role in his transition, his distaste for the Electoral College and the future of the Trump business brand. And he waded into how abortion and gun rights would be affected by his Supreme Court nominations.

Trump said he’s “fine” with same-sex marriage remaining legal across the country, and wouldn’t appoint Supreme Court judges with the goal of reversing that ruling.

“It’s irrelevant because it was already settled. It’s law. It was settled in the Supreme Court. I mean it’s done,” Trump said.

He added: “These cases have gone to the Supreme Court. They’ve been settled. And I’m — I’m fine with that.”

If Roe v. Wade, the Supreme Court decision that legalized abortion, were overturned, Trump said, decisions on whether to legalize or ban abortion would return to states.

Women seeking abortions whose state has banned them will “perhaps have to go — they’ll have to go to another state,” Trump said.

Trump did not repeat his campaign promise to deport all undocumented immigrants, pledging to focus first on deporting illegal immigrants who have committed crimes in the United States.

“What we are going to do is get the people that are criminal and have criminal records, gang members, drug dealers,” he said.

“We have a lot of these people, probably 2 million, it could be even 3 million, we are getting them out of our country or we are going to incarcerate.”

He said he still plans to build a US-Mexico border wall.

“After the border is secured and after everything gets normalized, we’re going to make a determination on the people that you’re talking about who are terrific people,” he said.

House Speaker Paul Ryan said Sunday that despite Trump’s campaign rhetoric, lawmakers were not about to form a deportation force to round-up and deport undocumented immigrants. The focus was on securing the border instead, he told CNN.

Trump’s rallying cry on the campaign trail was that he’d “drain the swamp” in Washington. But so far, Trump’s transition team is filled with the usual suspects — lobbyists and longtime Washington hands.

Trump didn’t chafe at that characterization of his transition team. “Everybody’s a lobbyist down there,” he said, referring to Washington.

“That’s the problem with the system — the system. Right now, we’re going to clean it up. We’re having restrictions on foreign money coming in, we’re going to put on term limits, which a lot of people aren’t happy about, but we’re putting on term limits. We’re doing a lot of things to clean up the system. But everybody that works for government, they then leave government and they become a lobbyist, essentially. I mean, the whole place is one big lobbyist,” Trump said.

He said relying on those lobbyists now while planning to eliminate them later is no contradiction.

“I’m saying that they know the system right now, but we’re going to phase that out. You have to phase it out,” Trump said.

Trump stuck by his often-mocked claim that he knows more than American generals about fighting ISIS — despite having no experience in government, the military or elected office before winning Tuesday’s presidential contest.

“Now, maybe it’s leadership, maybe it’s something else. Who knows? All I can tell you is we’re going to get rid of ISIS.”

Still, he says, he favors ditching the Electoral College and handing the presidency to the winner of the popular vote.

“I’m not going to change my mind just because I won. But I would rather see it where you went with simple votes. you know, you get 100 million votes and somebody else gets 90 million votes and you win. There’s a reason for doing this because it brings all the states into play,” Trump said.

On the Trump brand

Trump and his children both said they’re not sweating any negative impact on their family’s businesses resulting from a long and contentious campaign — or from backlash to the President-elect.

“I don’t think it matters. This is so much more important, and more serious,” Ivanka Trump said.

Her father added, “I think what Ivanka’s trying to say, ‘Who cares? Who cares?’ This is big league stuff. … We’re going to save our country. I don’t care about hotel occupancy. It’s peanuts compared to what we’re doing.”

Trump isn’t putting his family’s business in a blind trust — leaving it to his children instead — but does plan to turn down the salary typically paid to presidents.

Trump also signaled he has no real plans to change his tone — even though it’s seen by many as evidence of a man too combustible for the presidency.

“Well, sometimes you need a certain rhetoric to get people motivated,” Trump said. “I don’t want to be just a little nice monotone character, and in many cases I will be.”