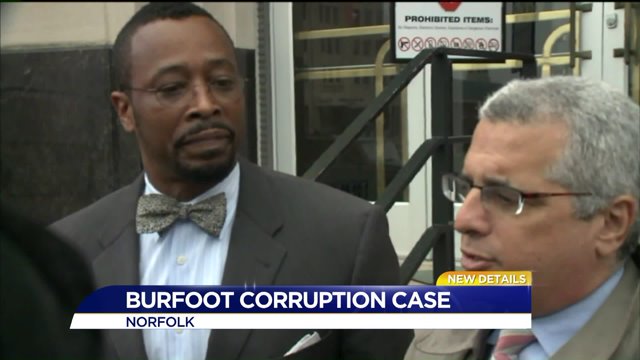 Etheridge said he gave thousands of dollars to Burfoot and did a lot of renovations to his home.

He said in exchange Burfoot would "set the table" for them to get on major development projects with the city of Norfolk. Etheridge said making Burfoot happy was an investment for his company. Burfoot is on trial for perjury and political corruption.

He reviewed a letter that exempted Etheridge from getting into trouble in exchange for his testimony about Burfoot.

He talked about Etheridge's previous criminal history and said if he lied to law enforcement in the past, he could be lying during his testimony.

Sacks was also trying to poke holes in the idea that Burfoot was a partner in the group Tivest, a company that has since folded.

Curtis Etheridge's brother is Dwight Etheridge, a star witness for the prosecution.

The prosecution alleges that Burfoot took cash and other things in exchange for his City Council votes over the course of several years.

The developers and businessmen who are accused of giving Burfoot kickbacks are Dwight Etheridge, Tommy Arney, and Ronnie Boone.

Prosecutors alleged Tuesday that another city councilman told Etheridge not to give Burfoot a dime in exchange for votes a few years ago. The prosecution said Tuesday that Etheridge did not listen and continued to give money to Burfoot.

The defense calls the accusations against Burfoot completely false.

Defense Attorney Andrew Sacks said the three bank fraud criminals Etheridge, Arney and Boone made false accusations against Burfoot to law enforcement in exchange for getting their sentences reduced.

Burfoot is accused of not only using city funds for personal gain, but also of bribing developers and city business owners while he served as a city councilman, vice mayor and treasurer.

On Monday during jury selection, jurors were asked if they could be fair and impartial and were asked if they knew anyone connected to the case, if they will suffer any hardships due to the anticipated length of the trial and if they have ever served on a jury which came to a verdict.

The judge also said that aspects of Burfoot's alleged extramartial affairs would be part of trial and asked the potential jurors if they could still be fair and impartial knowing that information.

The judge said the trial is expected to last a month, but said they would only be in court Monday through Thursday.

Dozens of people were issued subpoenas and many of them are high ranking officials.

Burfoot is accused of taking almost a half a million dollars in kickbacks.

Federal prosecutors said he got work done to his home, a Mercedes, and got cash for the mother of his children, among other perks.

During a previous interview with News 3, Sack said his client is completely innocent.

“Anthony Burfoot has denied and will continue to deny that he received cash payments from anybody to cast a vote. It just didn't happen,” said Sacks.

Court documents outline how the federal government will call numerous witnesses who will detail their own corrupt dealings with Burfoot.

There will also be several women who say Burfoot brought them to a beach house that they thought was his, but in fact was owned by Boone, according to court records.

In the documents, federal prosecutors state they have video recordings of council meetings, along with bank, phone and other records as evidence for their case, including emails.

Court records indicate they’ll bring up Burfoot’s prior testimony during a case in 2013 to prove he lied under oath. Sacks told the jury Tuesday that Burfoot did not lie under oath.

“He is stunned by these accusations. He believes so strongly in his innocence he's baffled he doesn't understand it,” said Sacks.

The jury is made up of 10 women and 6 men who range in age. The judge let the jurors go home early Tuesday so they could vote. Court is expected to continue Thursday at 10 a.m.