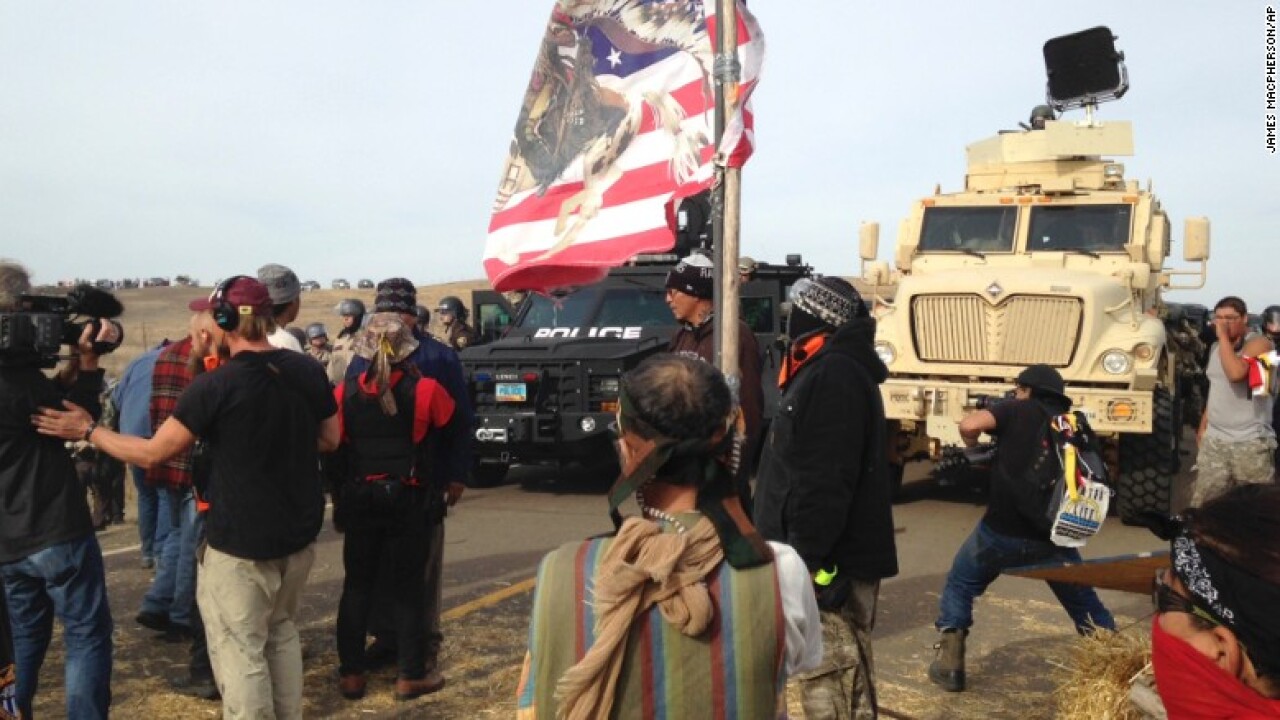 After another round of tense standoffs between activists and law enforcement over the Dakota Access Pipeline, an uneasy peace settled over this region of North Dakota that has become ground zero for opposition to a $3.7 billion project that would move domestic crude oil across four states.

Clashes on Thursday led to the arrest of more than 140 people after law enforcement cleared the area and pushed protesters to another encampment miles away.

But activists have not been dissuaded — quite the opposite. They say they are hunkering down and prepping for a prolonged standoff through what’s sure to be a harsh winter.

Here’s where things stand after this weekend:

Remind me again, why are people upset?

Stretching 1,172 miles from North Dakota to Illinois, supporters say the pipeline would be an economic boon for the region, while decreasing the nation’s reliance on foreign oil.

However, the pipeline snakes past two major Indian reservations, including Standing Rock, which is located in parts of the North and South Dakota.

The Standing Rock Sioux Tribe has said the pipeline has threatened its members’ economic and environmental well being — and could destroy burial and prayer sites. Activists have since flocked there to join the fight.

Have the activists left?

No. They have retreated to their main camp, where people have gathered since late summer.

Tipis and tents continue to go up in and around the Oceti Sakowin camp, about a mile south of Thursday’s clashes. It’s surrounded by several other camps, including a new overflow camp on the other side of Cannonball River.

Multiple groups have joined the protest. On the road to Oceti Sakowin, flags flap in the cold wind for the Leech Lake Band of Ojibwe, The Great Seminole Nation of Oklahoma and the Tulalip Tribes wave–all near an RV that bears the sign, “Muslims Standing with Standing Rock Sioux.” There’s also a Gay Pride rainbow flag, a POW/MIA flag, and an American flag hung upside down.

People stay in traditional camping tents, tipis and makeshift structures covered in tarps. One group’s temporary home, an old school bus, painted in blues, greens and purples, bears the words “Mni Wiconi,” followed by the English, “Water is Life,” a motto in these parts.

An open tent is filled with winter jackets, hanging on metal racks — an indication that protesters are willing to suffer through winter weather. A yellow sign leans next to another tent and advertises, “Free feminine hygiene & baby” products.

A large white placard lists the camp’s “direct action principles.” Included are reminders to stay “peaceful and prayerful,” to keep children away from danger and to remember that those assembled here are protectors, not protesters. Many people refer to themselves as “water protectors.”

Yes. By Friday morning, construction equipment was beeping and clanking at the construction site, and activists were gone from the area.

Other activists cut holes in doors and put their arms through them covered in concrete casts, fusing their arms to the door.

Activists had attempted to claim this land in the path of pipeline construction for a new camp to protect sacred Native American sites but the camp was short-lived.

The new site became ground-zero for Thursday’s clashes. Law enforcement used pepper spray and bean bag rounds to disperse the crowd on Thursday, leading to the arrests of 141 people. In response, protesters set fires to vehicles, construction equipment and debris on a bridge, resulting in the closure of the bridge and Highway 1806.

Did clashes between activists and law enforcement happen?

No, but a fire broke out Saturday night west of Backwater Bridge and burned into early Sunday morning.

Activists deny they had anything to do with it.

Law enforcement continues to maintain a presence near the Backwater Bridge north of the main camp to prevent activists from entering the area, now considered a crime scene.

Did the protests settle down over the weekend?

As dawn broke Saturday, the sound of prayers wafted up to the hills above the camp. By 11 a.m., dozens of people had set out from the camp toward the police line for a prayer circle.

The mood was prayerful, but also defiant, as they arrived at the bridge, where remnants of burned vehicles remained from the unrest.

Members of different tribes listened as a chief who wore an elaborate head dress spoke to the crowd, urging them to stay the course as construction continued up the road.

Back at Standing Rock, women performed a ceremonial dance and allowed it to be recorded in a rare instance of a sacred ritual being shared with outsiders.

“The dancers invited the media to record it because they want the healing power to be shared with the world,” activist Erin Tapahe said.

Many activists say they plan to stick around for the long haul even as winter approaches. From there, they will continue to work to halt pipeline construction until it has been reviewed for environmental impact to their satisfaction.

Standing Rock Sioux Tribe Chairman Dave Archambault II said he is considering a class action lawsuit over excessive police force against his people throughout the standoff, including Thursday’s clashes.

“Both the government and private sector enlisted and sanctioned dangerous and dehumanizing tactics through a taxpayer-funded, militarized law enforcement with documented human rights abuses,” Archambault II said in a statement Sunday. “The aggressive acts of these forces have caused severe injuries and endangered the safety of thousands of peaceful protectors who share our goal of protecting the water.”