The real reason Van Gogh sliced off his ear 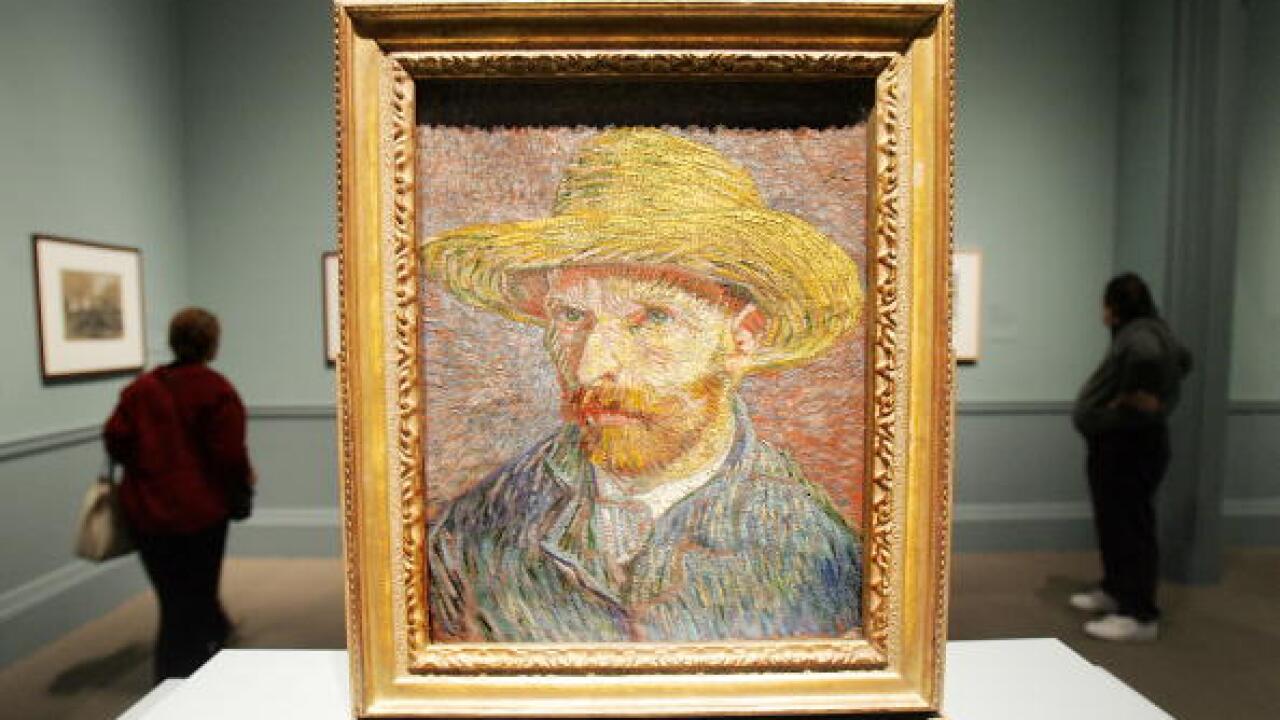 NEW YORK – OCTOBER 11: Vincent Van Gogh’s painting “Self Portrait with a Straw Hat” is displayed at the exhibit “Vincent Van Gogh: The Drawings” during a press previewat the Metropolitan Museum of Art October 11, 2005 in New York City. The major exhibition is the first in the U.S. to focus on Van Gogh’s drawings and will be open to the public October 18 through December 31, 2005. (Photo by Mario Tama/Getty Images)

A woman looks on the living replica of Dutch painter Vincent van Gogh’s famously severed ear which is displayed at Culture and media museum ZKM, in Karlsruhe, southwestern Germany, on June 4, 2014. The ear is part of the exhibition “Sugababe” by Diemut Strebe, an artist specialised in artworks using biological material, who collaborated with scientists to reconstruct the Dutch master’s ear using DNA from a relative and 3D printers.
(Photo credit: THOMAS KIENZLE/AFP/Getty Images)

It was the night before Christmas Eve in 1888 — a cold Sunday evening in the French city of Arles — when Vincent Van Gogh took the razor he kept on his small dressing table and slashed off his left earlobe.

Why? Nobody knows. Some of the more popular theories include madness, drinking problems, a gory fight with artist friend Paul Gauguin and a desire to be coddled by his mother.

More than a hundred years later, it is still the most debated event in the famed Dutch artist’s life.

But a new book suggests another likely motive: He heard wedding bells.

Van Gogh suffered a breakdown and cut off his ear after receiving a letter informing him that his brother Theo was getting married, says art expert Martin Bailey in his book,”Studio of the South: Van Gogh in Provence.”

“It was fear that pulled the trigger and led to the breakdown,” Bailey told CNN in an interview. “Fear of being abandoned in both an emotional and financial way.”

Putting the clues together

Some historians have dismissed this theory, as they assume Van Gogh learned of his brother’s engagement long after the ear episode. But Bailey disagrees.

“There are other more ridiculous theories out there. I look at the facts and the news of the wedding almost certainly reached him that day,” he said.

“It’s a matter of putting all the clues together. We don’t have that letter, but in another one Van Gogh sends in January, he mentions receiving money from his brother on the 23rd of December.”

Bailey believes the money had to come with the news that Theo and art dealer Jo Bonger were engaged.

“What has escaped the attention of Van Gogh scholars is that the fiancée received a telegram of congratulations on 23 December from her older brother Henry,” said Bailey. He added that Theo had written to his own mother two days earlier, and would want to share the news with his older brother to avoid him getting the information from others.

Van Gogh and his brother were close, and the struggling artist relied on Theo for financial support. Van Gogh was likely despairing that Theo’s marriage would harm their close relationship and that the pressures of supporting a growing family would leave Theo less money to give to his brother, Bailey said.

“At a deeper level, there may possibly have been an element of jealousy; Theo had succeeded in finding love, whereas Vincent had failed to sustain long-term relationships,” wrote Bailey in the book.

The Van Gogh story everyone wants to hear

Bailey’s book focuses on Van Gogh’s stay in Arles, in the south of France, where he lived in a self-described “Yellow House” and became enchanted by bright colors.

“The sunny environment of the south opened his eyes to a new way to use light and colors. He had never been so dramatic and bold. It was a period of great creativity, and the first time he had his own home,” Bailey said.

But it is the “ear chapter,” as some call it, that grabs casual readers’ attention.

“It’s the Van Gogh story everyone wants to know about. Writing about that period, I had to include it,” Bailey told CNN. “There was an enormous public interest, both now and back at the time, when newspapers wrote about the event.”

After cutting off his ear Van Gogh put on his beret and dragged himself to a nearby brothel to give the severed earlobe, wrapped in paper, to a young woman recently identified as Gabrielle Berlatier.

After Berlatier fainted on the spot at the sight of the ear, Van Gogh fled — and the ensuing chaos caused a stir in the local press.

Bailey writes that Van Gogh would describe the events as “a simple artist’s bout of craziness and then a lot of fever following a very considerable loss of blood, as an artery was severed.”

But while the wound healed, the mutilated ear was a terrible disfigurement and became a constant reminder of what the painter had done.

‘Wedding was only the trigger’

While news of the wedding was what pushed Van Gogh over the edge, Bailey told CNN it was not the sole catalyst.

“There is still a lot of debate around Van Gogh’s medical problems, and there are thousands of papers in medical journals debating them. The wedding was only the trigger,” the author said.

While his own doctors believed the artist suffered from epilepsy, recent experts have suggested absinthe poisoning, alcoholism, bipolar disorder, and sunstroke among other factors. There is no consensus.

Self-mutilation might have well been the artist’s plea for help.

An 1893 letter discussing Van Gogh’s medical records states the Dutch impressionist was “prey to aural hallucinations,” Bailey said. Cutting off his ear might have been a vain attempt to silence those noises.