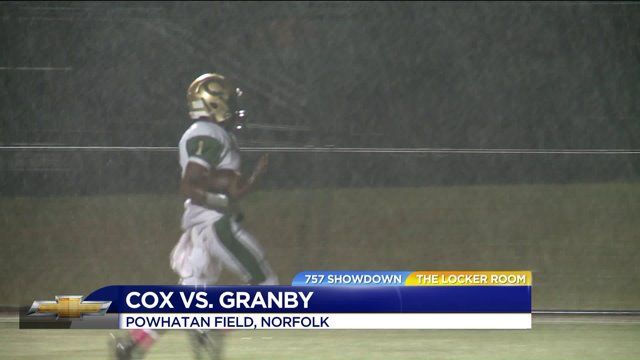 NORFOLK, Va. - Cox has only played two out of district games since 2000. After a VHSL rule change last year, Beach district schools were allowed to schedule a non-district game on their schedule.

As is the case with most rain-filled games, fumbles were a hot commodity, but Leno Lester held on to the rock to rack up 132 yards and two touchdowns for the Falcons. "Leno is that runner, he's so small and shifty that you kind of lose him in the mess and then all of a sudden he pops up on the other side and he's sprinting down the field," says head coach Bill Stachelski.

"It was a tough battle all night,  we just keep running the same plays, and just getting the offense going, the offensive line did a great job tonight," Lester said about his performance.

Cox is now 7-1 for the first time in school history, and meet up with Ocean Lakes next week for a pivotal district game.