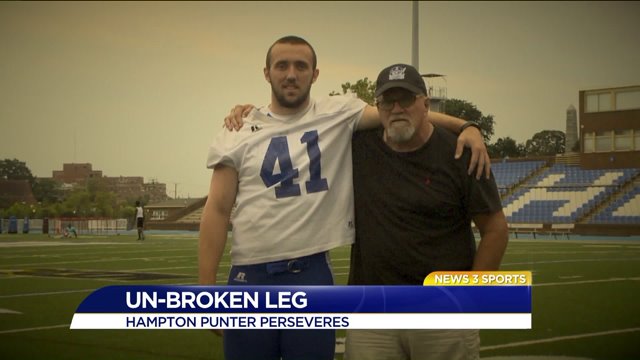 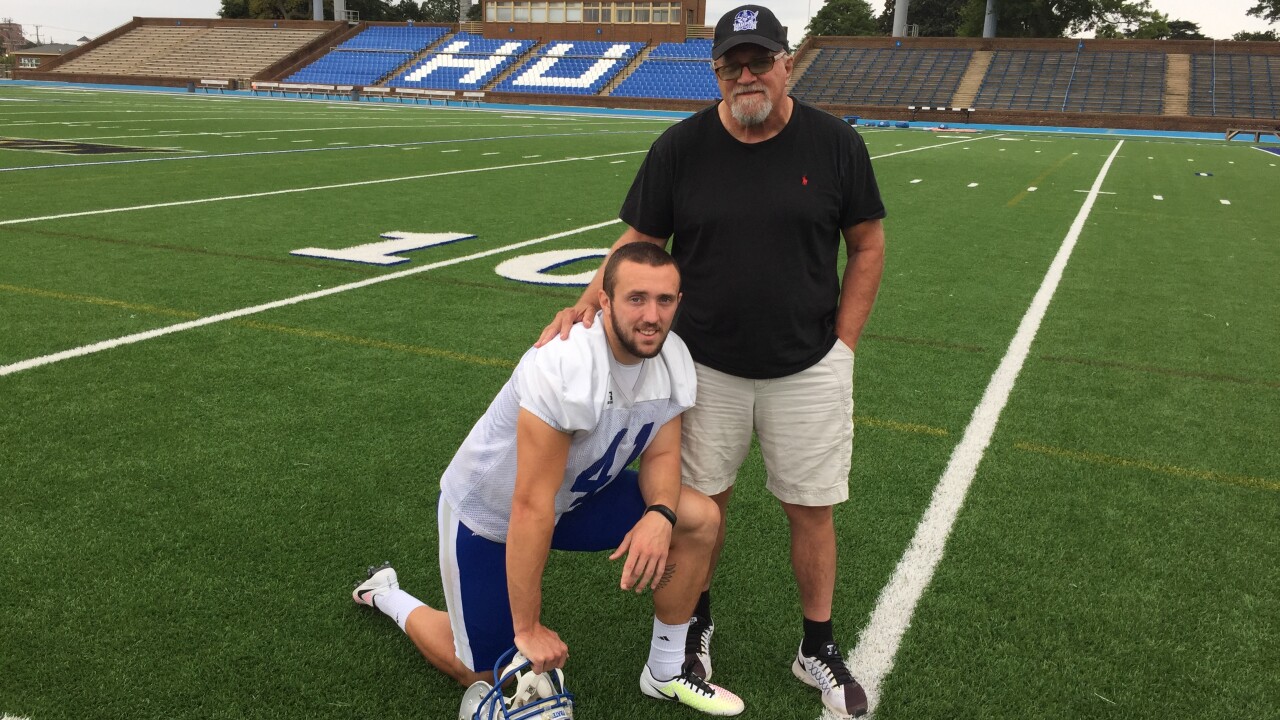 HAMPTON, Va. - Christian Faber-Kinney has an eye for the sky.

Hampton University's two-time all-conference punter has already graduated. His degree is in aviation management with a focus in air traffic control.

"I tell other air traffic controllers they have to look out for my footballs to make sure the planes don’t run into them," Faber-Kinney said smiling.

A student of aeronautics, Christian's own flight has seen ups, downs, highs and lows.

The Lafayette High School product came to Hampton without a roster spot, much less a scholarship.

"A walk-on punter - the two worst things you can be on the football team," Faber-Kinney explained. "I had to start from the ground up."

"Since my freshman year, my father and I have actually been homeless," Faber-Kinney admitted. "It's due to a lot of unforeseen circumstances. We go from staying in our cars to friends houses to motels."

A pair of surgeries set-off financial trouble for Christian's single-father Joe Kinney. Although he receives Social Security, he's not healthy enough to work.

"I don’t like telling where I live," Joe shared. "I live in a parking lot - in my truck, right now."

Off and on, for the past four years, Joe and Christian have been homeless. But they've been together - for both the ups and downs. Christian has even tried to convince his father to stay with him in his dorm.

"I’m not freaking out that I’m homeless," Joe explained. "This is the greatest thing to me - seeing Christian succeed in fulfilling his dream."

"The bond that we’ve built in those tough times – we’ve been tested," Christian said of his relationship with his father. "We’ve come out on top. My father and I are closer than anyone can be. I love him so much."

If the NFL doesn't work out, Christian's choice to pursue a career as an air traffic controller wasn't about his interest in aviation. It actually wasn't about him at all.

"My school resource officer in high school asked me what I wanted from college," Christian recalled. "I told him I wanted a career. He said if I want an automatic job, it should be air traffic controller. I'm making sure I take care of what I can here so I can take care of me and my father once I leave Hampton University."

Christian has an eye for the sky because his sights are set on high achievements. After all, why look down? He's already familiar with the view from the bottom.

"The struggle: it makes or breaks you," Faber-Kinney said. "There’s moments in life that are going to hit you – and you can fall or you can fight. I chose to fight."