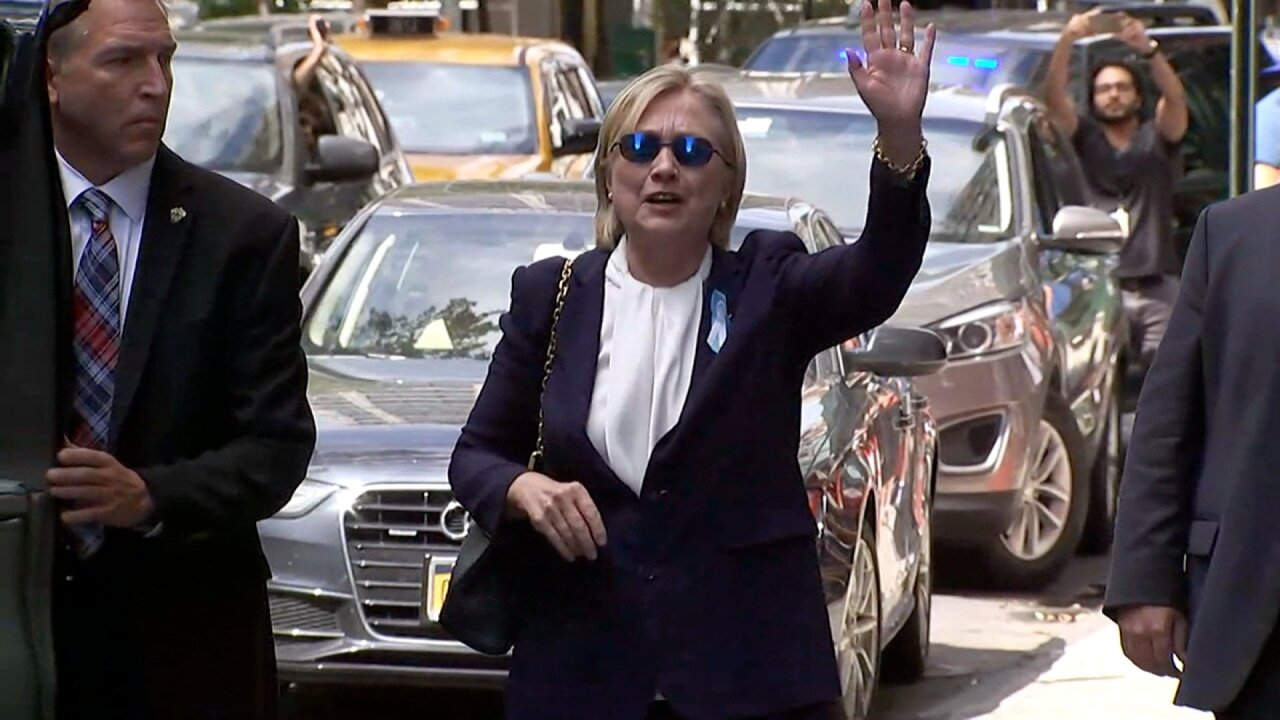 Hillary Clinton has pneumonia, her doctor said Sunday, hours after the Democratic nominee stumbled and exited a 9/11 commemoration ceremony early.

The incident seems certain to prompt further scrutiny of Clinton’s health and her campaign’s transparency — though Republican rival Donald Trump was uncharacteristically silent throughout a solemn day marking the 15th anniversary of the September 11 attacks.

Clinton, 68, was diagnosed on Friday with pneumonia, and “was put on antibiotics, and advised to rest and modify her schedule,” Dr. Lisa Bardack said in a statement.

“While at this morning’s event, she became overheated and dehydrated. I have just examined her and she is now re-hydrated and recovering nicely,” said Bardack, chairman of internal medicine at the Mount Kisco Medical Group.

Bardack attended to Clinton at her Chappaqua home Sunday.

But the episode quickly impacted Clinton’s campaign. Late Sunday night a campaign spokesman said a Clinton trip to California was being scrubbed, including several high-dollar fundraisers and television appearances by the candidate.

Clinton’s health came into sharp focus Sunday as she appeared wobbly and stumbled as Secret Service agents helped her into a van to exit a memorial service marking the 15th anniversary of the September 11, 2001, attacks. The Democratic nominee traveled to her daughter’s nearby apartment and the campaign initially said she felt “overheated.”

A video of Clinton’s departure from the 9/11 event at Ground Zero in Manhattan, posted by Twitter user Zdenek Gazda, shows her clearly stumbling, with Secret Service agents helping her into the van in the motorcade.

Clinton appeared to faint as she was leaving the Ground Zero ceremony, two law enforcement officials — including one who witnessed the incident — told CNN.

Leaving her daughter’s apartment a little before noon, Clinton told reporters she was “feeling great.”

“It’s a beautiful day in New York,” she added, while smiling and waving to supporters on the street before getting into her motorcade.

Clinton suffered a two-minute coughing fit during an event in Cleveland last week, which she blamed on allergies — and wryly put on the shoulders of GOP nominee Donald Trump.

“Every time I think about Trump I get allergic,” she joked in front of the crowd.

Trump and his top surrogates have claimed that she faces a health crisis, citing selectively edited videos of public events to advance claims she’s suffered seizures.

There is no credible evidence to support any of these claims. Clinton’s physician — the only person to speak on the record who has actually examined her — has repeatedly affirmed the former secretary of state’s health and fitness for the highest office in the land.

During an appearance last month on the Jimmy Kimmel show, Clinton called the GOP claims about her health a “wacky strategy.”

“I don’t know why they are saying this,” she said. “I think on the one hand, it is part of the wacky strategy, just say all these crazy things and maybe you can get some people to believe you.”

Throughout Sunday Trump and surrogates were uncharacteristically quiet about Clinton’s health. Sources involved in Trump’s campaign said they want to be respectful about the health of his Democratic rival.

One said the campaign’s message was to wish Clinton well and hope she gets the necessary medical care.

Another source said surrogates have been instructed to be respectful and not to post on social media about Clinton’s health incident.

Separately someone familiar with the situation said staff was instructed to keep quiet and not post anything negative on social media about the issue — with termination a potential consequence for doing so.

Trump’s running mate, Indiana Gov. Mike Pence, refused to acknowledge reporters’ questions Sunday about Clinton and her health at an awards ceremony that he presided over in Indianapolis.

The most recent major health problem Clinton has suffered was a scare in 2012 following a concussion that resulted from a fainting spell — but she is in good health now, according to a statement from her doctor that Clinton’s campaign released in July 2015.

The health statement says the blood clot, also known as a thrombosis, that Clinton suffered between her brain and skull following a fainting spell and concussion in late 2012 is completely resolved.

“She had follow-up testing in 2013, which revealed complete resolution of the effects of the concussion as well as total dissolution of the thrombosis. Mrs. Clinton also tested negative for all clotting disorders,” Bardack writes.

But as a precaution, Clinton remains on daily blood thinners, something her husband previously revealed. Clinton takes Coumadin, the brand name for the blood thinner warfarin. She also takes Armour Thyroid for her hypothyroidism, antihistamines and Vitamin B12.

Clinton has no known drug allergies, does not smoke, use tobacco products or illicit drugs and drinks occasionally, according to Bardack, who also details her exercise regime: yoga, swimming, walking and weight training.

Clinton is up to date on health tests, including a colonoscopy and a few other tests not often seen in a presidential candidate’s health disclosure: gynecologic exam, mammogram and breast ultrasound.

“She is in excellent physical condition and fit to serve as President of the United States,” Bardack’s letter concludes.