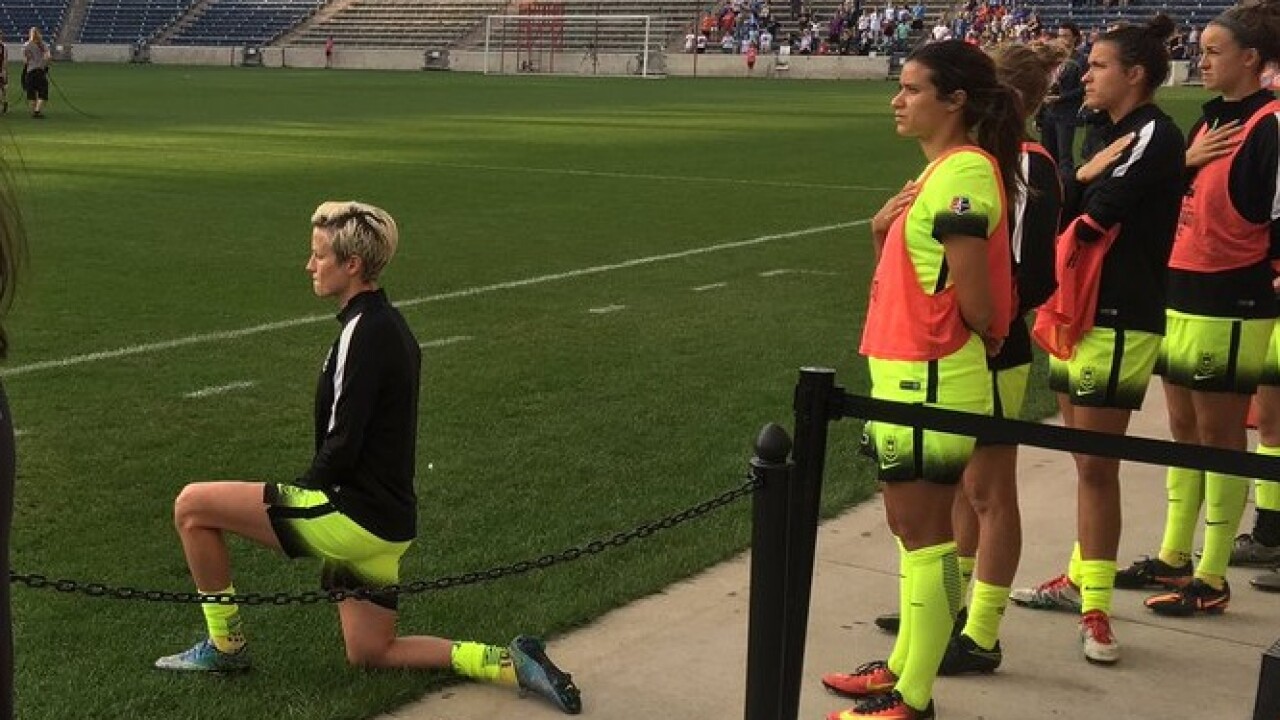 US soccer international and Seattle Reign midfielder Megan Rapinoe knelt during the national anthem before her team’s clash with the Chicago Red Stars in a show of solidarity with San Francisco 49ers’ quarterback Colin Kaepernick.

After the match, which saw the Reign come away with a 2-2 draw, she said the action was “very intentional.”

Rapinoe told American Soccer Now that the gesture was a “little nod to Kaepernick and everything that he’s standing for right now.

“I think it’s actually pretty disgusting the way he was treated and the way that a lot of the media has covered it and made it about something that it absolutely isn’t. We need to have a more thoughtful, two-sided conversation about racial issues in this country.”

Kaepernick, the quarterback who took the 49ers to the Super Bowl in 2012, ignited a firestorm of criticism last month when he sat in protest during the national anthem for a pre-season game, saying he would not honor a song nor “show pride in a flag for a country that oppresses black people and people of color.”

Since then he has continued his divisive protest. Ahead of a preseason game against the Chargers he took a knee during the national anthem, saying that he chose to kneel rather than sit to “show more respect for men and women who fight for the country.”

The US Women’s National Team (USWNT) star, in response to a tweet thanking her for the gesture, responded with a tweet saying “It’s the least I can do.”

She added: “Keep the conversation going.”

Rapinoe cited her experiences as a gay American who deals with discrimination in her decision to make the very visible show of support.

“Being a gay American, I know what it means to look at the flag and not have it protect all of your liberties,” she said.

“(The gesture) was something small that I could do and something that I plan to keep doing in the future and hopefully spark some meaningful conversation around it.

“It’s important to have white people stand in support of people of color on this. We don’t need to be the leading voice, of course, but standing in support of them is something that’s really powerful.”

The 31-year-old was part of the team that helped the US win the World Cup in 2015. She also played for the USWNT in Rio for the Olympics.

Rapinoe is not the first athlete to show solidarity with the sixth-year quarterback. Kaepernick’s teammate, safety Eric Reid, knelt beside him before the Chargers game. Former NFL player and Green Beret Nate Boyer, a guest of Kaepernick, stood to the quarterback’s left with his right hand over his heart.

Seattle Seahawks cornerback Jeremy Lane also sat during the national anthem prior to his team’s game against the Oakland Raiders. He told reporters that he felt similarly to what Kaepernick had expressed and wanted to show support for him.

“The media painted this as I’m anti-American. I’m anti-men and women of the military,” Kaepernick said after the 49ers’ victory against the Chargers. “That’s not the case at all.”

He said he intended to donate the first $1 million he earns this year to different organizations that help communities, although he did not name specific ones.

“I’m not anti-America,” he said. “I love America. I love people. That’s why I’m doing this. I want to help make America better.”

CNN has reached out to Rapinoe, the Seattle Reign and the National Women’s Soccer League for comment.