UN: We have ‘moral responsibility’ to help Haitian cholera victims 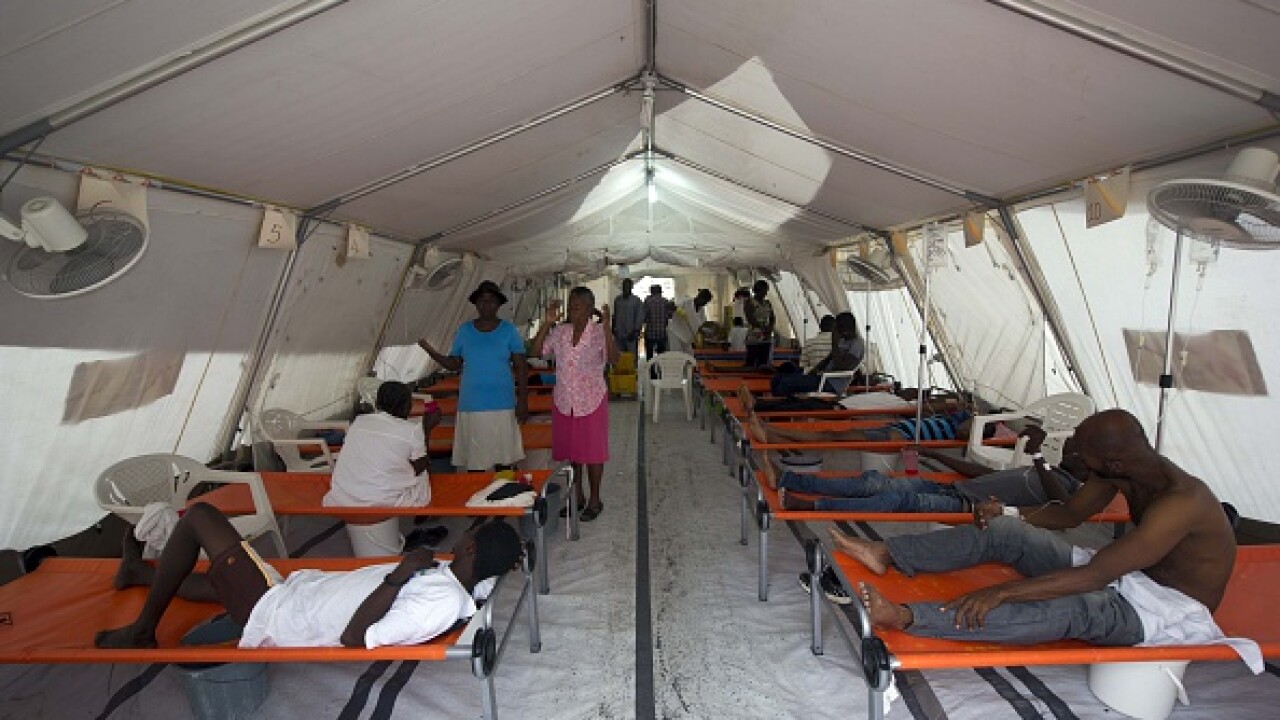 Cholera patients are treated in the Martissan area of Port-au-Prince on December 9, 2014. (Photo credit should read HECTOR RETAMAL/AFP/Getty Images)

In a major shift, UN Secretary-General Ban Ki-moon has indicated the United Nations is preparing to compensate for the cholera outbreak in Haiti that killed at least 10,000 people.

UN peacekeepers from Nepal are widely believed to have caused the outbreak from their camp rife with poor sanitation, following the massive 2010 earthquake in Haiti.

Details are sketchy on what kind of aid will be offered. UN officials said things are being worked at a high level.

Ban is “actively working to develop a package that would provide material assistance and support for those Haitians most directly affected by cholera,” a spokesman said, reading a statement from the UN’s top diplomat, who has four months left in his term

“These efforts must include, as a central focus, the victims of the disease and their families,” the statement said.

Spokesman Farhan Haq, speaking at a briefing at the UN in New York, declined to say whether this meant financial payoffs to those families who lost loved ones in the devastating outbreak.

The UN has a “moral responsibility” to the victims of the cholera epidemic, Ban said.

The announcement comes after a US appeals court on Thursday turned down an appeal by Haitian victims of the epidemic. The victims had filed financial claims against the UN.

But the Second Circuit Court of Appeals panel in New York ruled in support of international agreements providing the UN with legal immunity in such cases. The UN is protected from being sued under legal agreements with the US and other member countries.

The ruling brought down supporters of legal action against the UN from the emotional highs of a UN acknowledgment Thursday of involvement in the outbreak.

Activists said the UN should choose other options now to provide relief to those affected by the cholera outbreak.

Reacting to the legal decision, Beatrice Lindstrom of the Institute for Justice and Democracy in Haiti said, “the UN has repeatedly used pending litigation as a pretext for avoiding a real discussion of remedies. This decision removes that pretext.”

Lindstrom’s comment came before the announcement of potential support from the UN was made.

In the past, U.N. member countries have feared heavy financial obligations for Haiti and other cases that could arise around the world.

Cholera is an acute gastrointestinal illness caused by ingesting food or drink contaminated with Vibrio cholerae bacteria. It can cause severe diarrhea and vomiting, which leads to extreme dehydration. Patients who are not treated quickly to restore lost fluids can die within hours. According to the US Centers for Disease Control and Prevention, there are 3 million to 5 million cases of the illness every year worldwide and 100,000 deaths.

After a leak Thursday to The New York Times of a scathing report by a UN investigator, UN deputy spokesman Farhan Haq told CNN that “over the past year, the UN has become convinced that it needs to do much more regarding its own involvement in the initial outbreak and the suffering of those affected by cholera.” The UN says it is considering several options.

The draft report The New York Times obtained, prepared by special rapporteur on extreme poverty and human rights Philip Alston and commissioned by the UN, says the epidemic “would not have broken out but for the actions of the United Nations.”

The UN is not saying that it caused the epidemic.

Cholera came to Haiti nine months after an earthquake struck, the first known appearance of the disease there in more than 150 years.