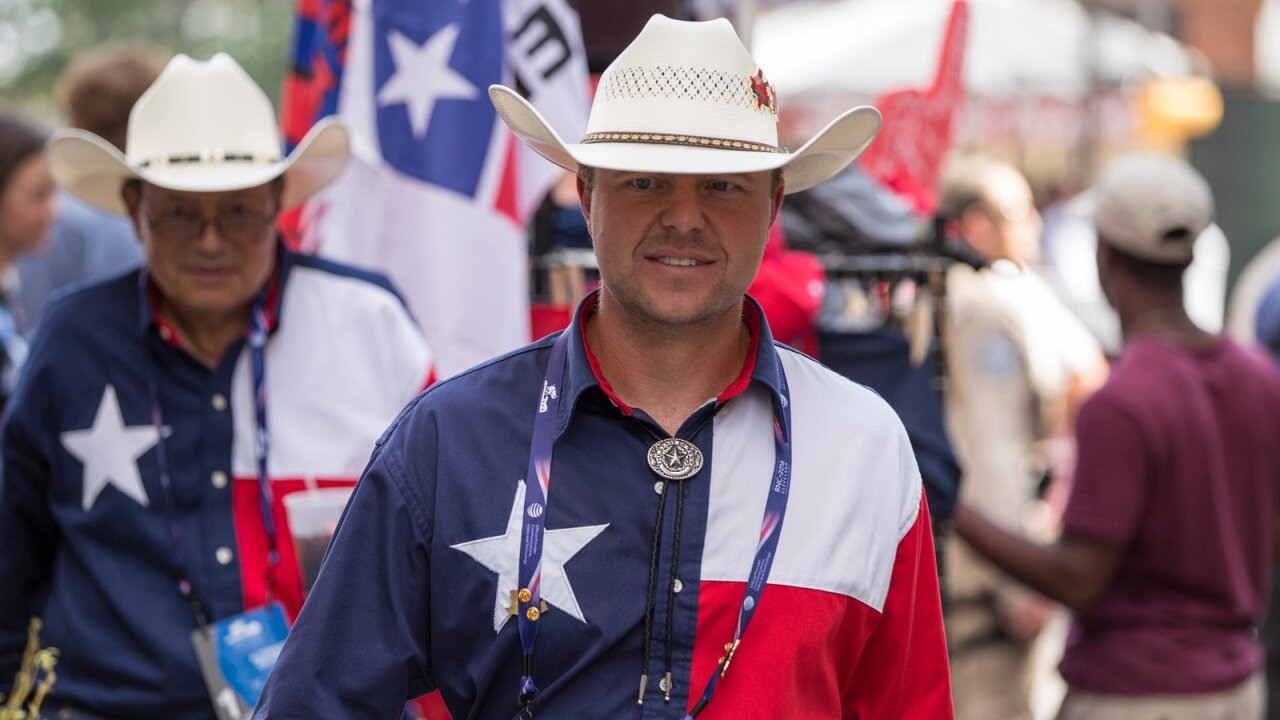 A man walks around the Republican National Convention, donning a Texas-themed outfit.

A federal appeals court said Wednesday that Texas’ voter ID law, which critics consider to be one of the strictest in the nation, violates the Voting Rights Act.

The 5th Circuit Court of Appeals, based in New Orleans, sent the case back down to the lower court for consideration of the appropriate remedy consistent with the opinion. The majority said that the lower court had not “erred” when it found the law has a “discriminatory effect on minorities’ voting rights.”

“In light of the impending election, we order the district court to file its order regarding the proper discriminatory effect remedy as soon as possible. The parties have expressed a willingness to work cooperatively with the district court to provide a prompt resolution of this matter, and we urge them to do so to avoid election eve uncertainties and emergencies,” the court said.

Attorney General Ken Paxton released a statement following the opinion, saying it was “unfortunate” that the court had not upheld the law in its entirety.

“Preventing voter fraud is essential to accurately reflecting the will of Texas voters during elections, and it is unfortunate that this common-sense law, providing protections against fraud, was not upheld in its entirety,” he said.

The ruling is a victory for voting rights advocates.

“No American should ever lose their right to vote just because they don’t have a photo ID. This is an enormous victory for voters in Texas,” said Myrna Perez, deputy director of the Brennan Center’s Democracy Program.

Election law expert Rick Hasen noted in a blog post that the remedy is “NOT going to be to strike the Texas Voter ID law as a whole, but instead fashion some kind of relief that gives people who have a reasonable impediment to getting an ID the chance to get one.”

He said one possibility could be to allow those who are unable to obtain an ID to sign an affidavit as to their identification.

The challenge marks one of several voting rights cases that are percolating through the courts in the final months of the election. On Tuesday, a federal judge softened a Wisconsin voter ID law, allowing those who had difficulty obtaining the proper identification the option of signing an affidavit as to their identity.

At the heart of many of the challenges — which include issues such as voter ID, early vote cutbacks and same-day registration — is a raging battle between Republicans who say they hope to fight voter fraud and improve public confidence in the election process and Democrats who say the true aim of several of the laws and procedures is to create a substantial burden on the right to vote, particularly for minority voters.

Texas passed the voter ID law in 2011 but it did not go into effect until 2013 after the Supreme Court invalidated a key section of the Voting Rights Act. Challengers said it was one of the strictest nationwide because it allows only a limited set of eligible IDs.

Although lower courts ruled against the law, the Supreme Court allowed it to remain in effect for the 2014 election over the strong objection of Justices Ruth Bader Ginsburg, Elena Kagan and Sonia Sotomayor.

The law requires voters to present certain government-issued photo IDs when voting in person which includes a Texas driver’s license, a Texas election identification certificate, a US Passport and a military identification card. Critics point out that while the state accepts a license to carry a handgun as a permissible form of ID, it does not permit federal or state government IDs nor a student ID.

Critics said the limited number of qualified photo identifications created a substantial burden on the right to vote for those unable to obtain the proper identification.

“No one doubts our unwavering duty to enforce antidiscrimination law,” wrote Judge Edith H. Jones, in a stinging dissent on behalf of herself and four colleagues. The fractured opinion was 9-6 on the discriminatory intent finding. “But in this media-driven and hyperbolic era, the discharge of that duty requires the courage to distinguish between invidious motivation and shadows. The ill-conceived, misguided and unsupported majority opinion shuns discernment,” she wrote.