Desperate for planes, military turns to the ‘boneyard’ 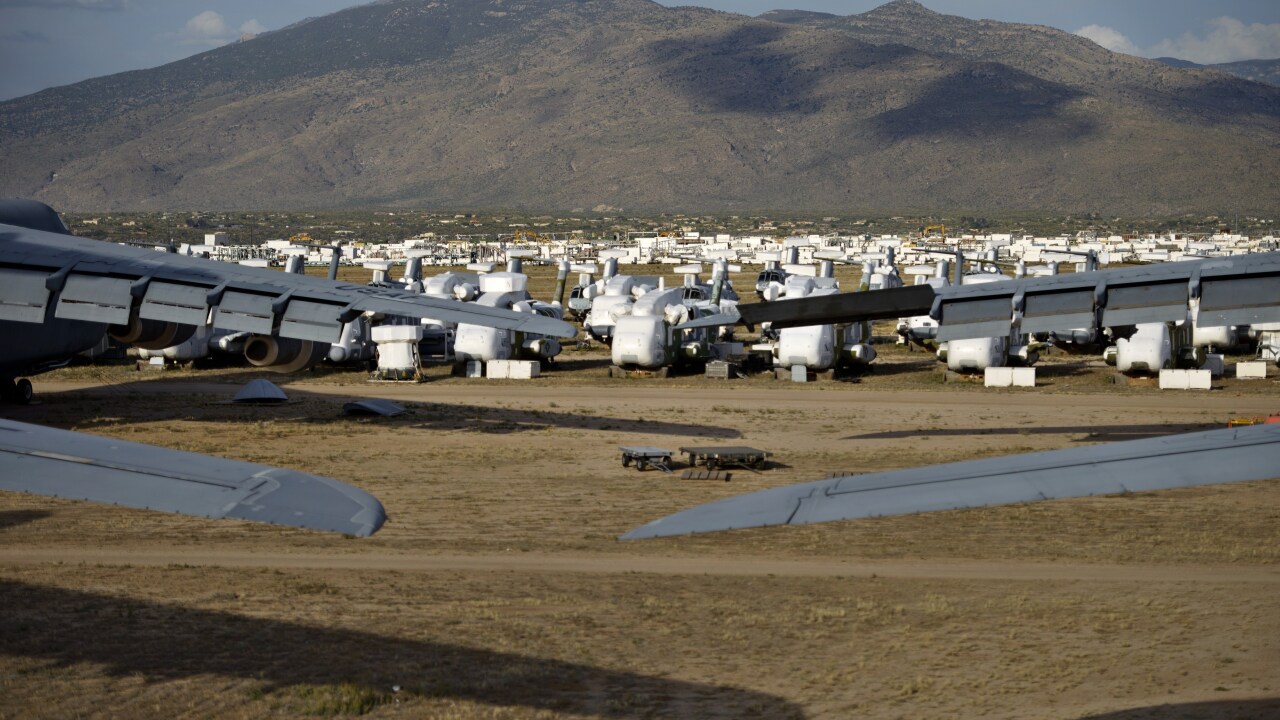 Variants of the Sikorsky CH-53 are seen beneath the wings of Lockheed C-5 Galaxy cargo jets in the boneyard at the Aerospace Maintenance and Regeneration Group on Davis-Monthan Air Force Base May 14, 2015 in Tucson, Arizona. AFP PHOTO/BRENDAN SMIALOWSKI (Photo credit should read BRENDAN SMIALOWSKI/AFP/Getty Images)

It’s something akin to raising the dead.

A troubling shortage of flyable combat aircraft — one military official recently called the airfleet the “smallest, oldest and least ready” in history — is forcing the military to go to its “boneyard.”

The Marine Corps announced last month it was taking the extreme step of resurrecting 23 F/A 18 Hornets to meet fleet requirements until the new — and much-delayed — F-35 fighter is eventually delivered.

“We are very focused on our current readiness, and at the moment, we don’t have enough Hornets for combat, flight instruction and day-to-day training,” Sarah Burns, a spokesman for the U.S. Marine Corps, told CNN.

Variants of the Sikorsky CH-53 are seen beneath the wings of Lockheed C-5 Galaxy cargo jets in the boneyard at the Aerospace Maintenance and Regeneration Group on Davis-Monthan Air Force Base May 14, 2015 in Tucson, Arizona. AFP PHOTO/BRENDAN SMIALOWSKI (Photo credit should read BRENDAN SMIALOWSKI/AFP/Getty Images)

She explained that the out-of-service, aging aircraft are housed at the 309th Aerospace Maintenance and Regeneration Group — a desert base in Arizona known as “the boneyard” — with the “intent to store, maintain, and upgrade them for today’s use.”

The military regularly sends “mothball” or extra aircraft to the “boneyard” for long-term storage, rather than destroying the planes. However, Lieutenant General Jon M. Davis, Deputy Commandant for Aviation for the U.S. Marine Corps, noted that while bringing back the planes does provide additional inventory, they are still “old birds” and not as reliable as they once were.

And if planes aren’t in the boneyard already, others are getting close.

The delayed arrival of new aircraft, like the fifth-generation F-35, also has forced the military to rely heavily on planes nearing the end of their lifespan.

According to Maj. Gen. Scott West, the director of current operations for the Air Force, airmen are flying some aircraft and bombers, like the B-52 Stratofortress, that are more than 50 years old.

As it presses aircraft back into service, the military is having to lean heavily on a smaller and aging air fleet — a trend that has leaders across all four armed service branches concerned about combat performance and pilot safety.

“Twenty-five years of continuous combat operations … coupled with budget instability and lower-than-planned funding levels, have contributed to one of the smallest, oldest and least ready forces across the full-spectrum of operations in our history,” said Major General Scott West, Director of Current Operations, Headquarters for the U.S. Air Force.

While each armed service branch has scrambled to find ways to fulfill their combat responsibilities in the short-term, military leaders said delays in the production of next-generation aircraft and shrinking budgets have put a strain on the condition of the current fleet, as well as the servicemen and women who fly and maintain them.

Fairchild Republic A-10 Thunderbolt II aircraft are seen stored in the boneyard at the Aerospace Maintenance and Regeneration Group on Davis-Monthan Air Force Base in Tucson, Arizona on May 13, 2015. AFP PHOTO/ BRENDAN SMIALOWSKI (Photo credit should read BRENDAN SMIALOWSKI/AFP/Getty Images)

The military commanders cautioned that they simply do not have enough aircraft ready for flight to keep up with the current pace of deployment and to safely train aircrews here at home.

A lack of spare parts and maintenance personnel trained to repair damaged aircraft are two of the main factors contributing to the lack of operational aircraft, according to military brass.

Describing military aviation as a “fragile ecosystem,” Davis emphasized the importance of keeping all requisite aspects of that system nourished in order to keep the entire network healthy.

“We are balancing the need to have our current fleet as ready and modern as possible, to train our pilots and maintainers, and to out match any current foe on the battlefield,” he said. “If any get out of balance for long, the whole system can begin to fray and collapse.”

The need to improve readiness and training has been further amplified by the shrinking technology advantage that the U.S. holds over potential adversaries like China and Russia, according to Manazir.

“Provocations with state and non-state actors continue to cause instability in almost every region of the world,” he told the subcommittee. “We continue to face challenges associated with balancing readiness for today and modernization for tomorrow’s fight. More of our force is being demanded, deployed longer than planned. Intended replacements are not keeping pace with attrition.”

With that in mind, the Pentagon has fought to extend the life of several aircraft, including the A-10 Thunderbolt, despite calls from Congress to eliminate the program in favor of allocating funding to other initiatives.

But the lack of a clear replacement for the A-10, which specializes in performing close air support missions, has forced Congress to continue the use of the old warbird that first flew in 1975.

All four military leaders also repeatedly emphasized that the current lack of flyable aircraft could pose a significant risk to pilot safety.

Despite no significant rise in serious mishaps or accidents resulting from any gaps in maintenance and lack of training, the four services noted that the potential for such looms in the near future.

With fewer planes available, Davis said Marine aviators are receiving significantly less flight time. In the past, Marine pilots would receive 1,000 to 1,500 hours but today’s aviators only have between 500 and 600 hours.

“I worry about my young aviators that aren’t getting the number of hours they need to,” Davis said. “As a young guy, I had a couple of close calls. I do not know how I would do having the amount of flight time that my youngsters get.”

There has been an uptick in recent minor aircraft incidents resulting in billions of dollars in damage and, in some cases, loss of life, the military brass told Congress.

Many of the incidents are still under investigation to determine whether they were caused by human error or an aircraft malfunction, but both lawmakers and military officials agreed that the limited training of pilots raises concern about the potential for future incidents.

“While it may not show itself directly today in the rate of mishaps, I do believe it exhibits itself in additional risk,” said Rep. Robert Wittman, R-Va., the subcommittee chairman.

“There’s a common theme here: We’re pushing harder. We have fewer resources. We have fewer of the skilled people in the necessary positions to do all the things that we need to do to make sure that we are not just rebuilding that readiness but maintaining the current level of readiness,” he said.