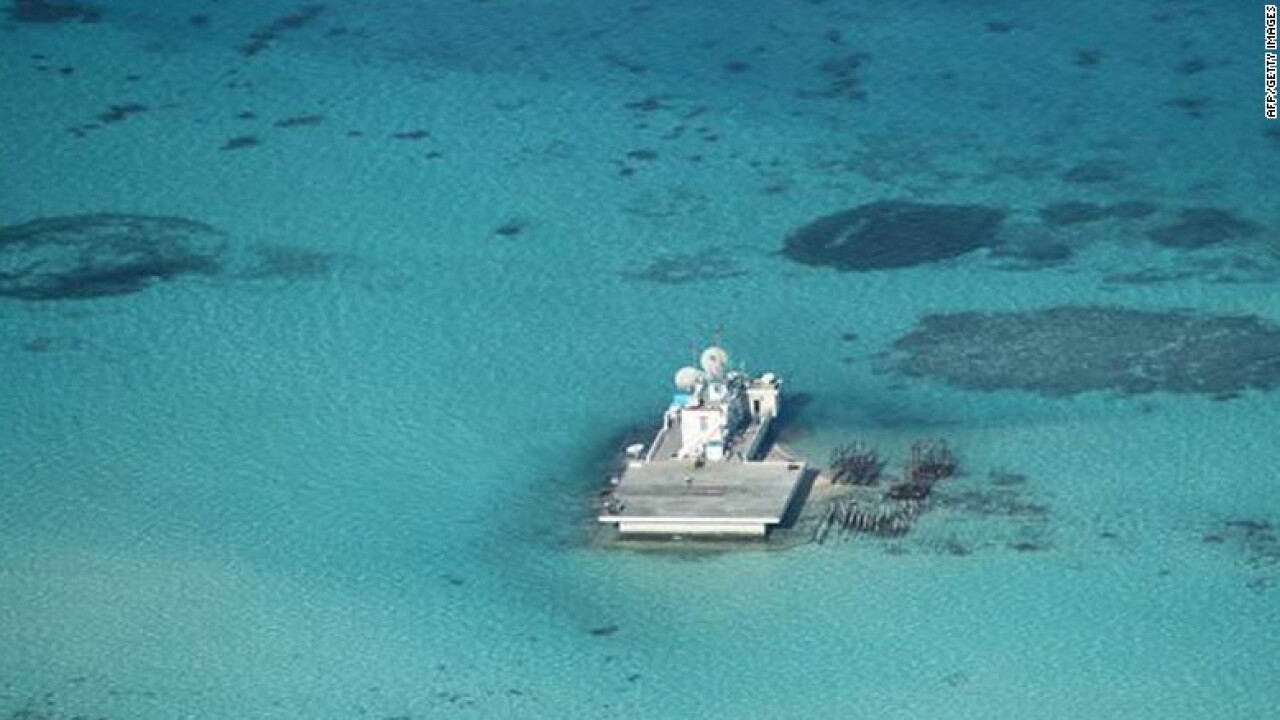 An international tribunal in The Hague ruled in favor of the Philippines in a maritime dispute Tuesday, concluding China has no legal basis to claim historic rights to the bulk of the South China Sea.

Chinese President Xi Jinping rejected the decision by the Permanent Court of Arbitration, which is likely to have lasting implications for the resource-rich hot spot, which sees $5 trillion worth of shipborne trade pass through each year.

“China will never accept any claim or action based on those awards,” Xi said. China had boycotted the proceedings.

The tribunal concluded that China doesn’t have the right to resources within its “nine-dash line,” which extends hundreds of miles to the south and east of its island province of Hainan and covers some 90% of the disputed waters.

Viewed as a decisive win for the Philippines, the ruling could heighten friction in a region already bristling with tension, especially if it unleashes a defiant reaction from China.

The United States, which has been at odds with China over freedom of navigation in the South China Sea, urged all parties “to avoid provocative statements and actions.”

Other countries could be emboldened

The ruling doesn’t just affect China and the Philippines, but other countries that have competing claims with the nation over large areas of the sea.

Malaysia, Vietnam and Indonesia have also taken exception to China’s growing presence in the region and could now be emboldened to take further action.

“If China’s nine-dash line is invalid as to the Philippines, it is equally invalid to those States and, indeed, the rest of the international community,” the lawyers who led the Philippines’ legal team said in a statement.

Japan, a key U.S. ally and China’s neighbor, issued a statement saying it “strongly expects that the parties’ compliance with this ruling will eventually lead to the peaceful settlement of disputes in the South China Sea.”

The United States is a major player in the region and has sent warships and military aircraft around the South China Sea, including near disputed reefs and shoals, citing international law and freedom of movement but triggering harsh warnings from China.

Washington takes no position on the territorial disputes in the South China Sea but has called for an immediate end to land reclamation.

President Barack Obama has urged a peaceful resolution to the dispute and while visiting Vietnam in May said that big nations shouldn’t bully small ones.

But as China has been at pains to point out, the United States isn’t among the 180 countries that have ratified the U.N. Convention on the Law of the Sea — potentially undermining its clout on this issue.

“This decision can and should serve as a new opportunity to renew efforts to address maritime disputes peacefully,” the U.S. State Department said in a statement.

The tribunal also found that none of the sea features claimed by China were capable of generating what’s called an exclusive economic zone — which gives a country maritime rights to resources such as fish and oil and gas within 200 nautical miles of that land mass.

It deemed they were rocks or low-tide elevations such as reefs, rather than islands.

Because China had no rights to the area as an exclusive economic zone, the tribunal found that some of its activities in the region were in breach of the Philippines’ sovereign rights.

China had violated those rights by interfering in fishing and oil exploration, constructing artificial islands and failing to stop Chinese fisherman from fishing the zone, the ruling said.

The panel found China had caused “severe harm” to coral around the site of its artificial islands. It had also “violated its obligation to preserve and protect fragile ecosystems.”

Chinese fisherman had also killed endangered sea turtles and giant clams “on a substantial scale” — with the full knowledge of China, the tribunal said.

How we got here

The Philippines and China have long been at odds over Beijing’s claims of sovereignty over large swaths of the South China Sea, and Manila took its fight to the court in 2013.

Tensions have ratcheted up as China has reclaimed land in massive dredging operations, turning sandbars into islands equipped with airfields, ports and lighthouses.

China had refused to participate in the case, which marks the first time an international court has ruled on the region’s mess of overlapping claims.

Feelings were running high on both sides of the dispute in the run-up to Tuesday’s ruling.

In the Philippines, the hashtag #CHexit was trending on Twitter — calling for China to leave the South China Sea.

The topic was also the most widely discussed on the Chinese social network Weibo, China’s equivalent of Twitter, with hundreds of thousands of users sharing a map of China with its nine-dash line and the caption “China can’t be one dash less.”

Despite being considered a strong ruling against China, the decision offers no clues to what happens next.

The tribunal said it “lacked the jurisdiction to consider the implications of a stand-off” between the Chinese and Philippines military, specifically at Second Thomas Shoal, and said any resolution of the dispute was “excluded from compulsory settlement.”

The tribunal hasn’t ordered China to take any particular steps to remedy the situation, dismantle construction on the islands or provide reparations to the Philippines.

And while the ruling is regarded as legally binding, there is no mechanism to enforce it.

“In terms of enforcement, much will depend on what the Philippines is now prepared to assert against China based on the award and China’s responses to those assertions,” said Natalie Klein, an international law professor at Macquarie Law School in Australia