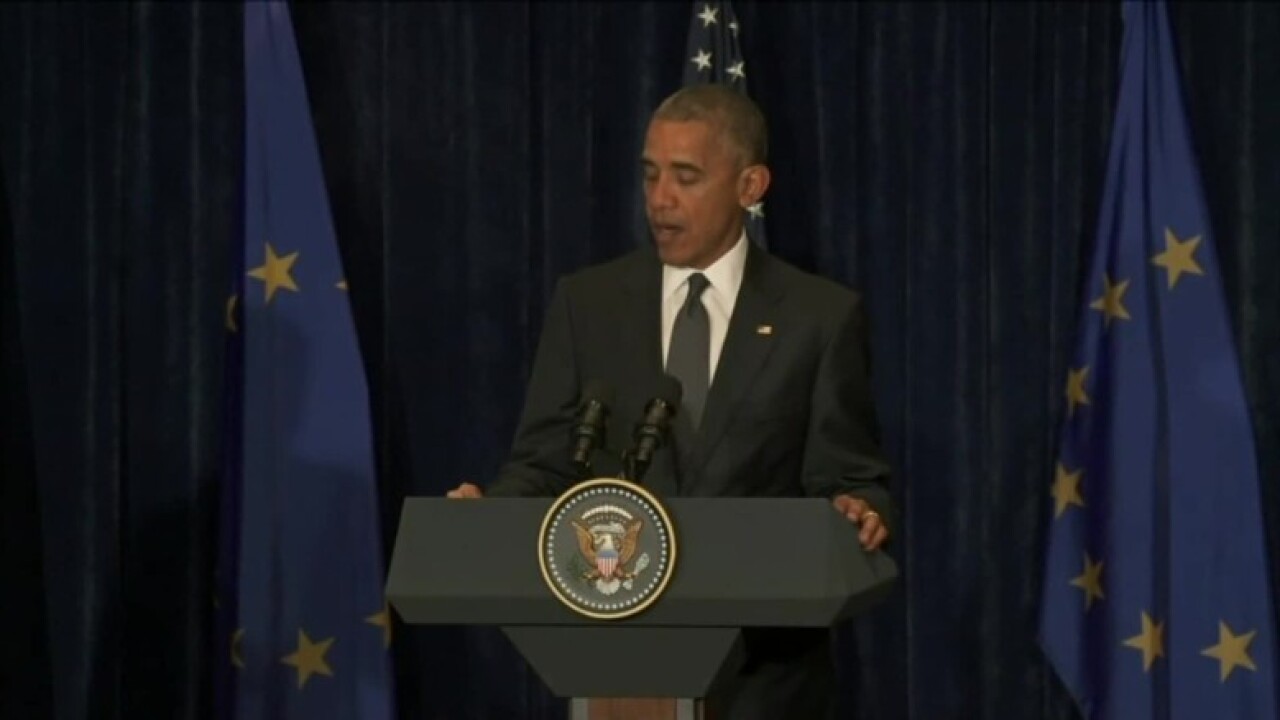 President Barack Obama said Friday that the nation was “horrified” after what he called “a vicious, calculated and despicable attack on law enforcement” in Dallas.

It was the second somber statement about shootings on American soil the President made from Europe in less than 12 hours. He condemned the recent shootings by police of black men in Minnesota and Louisiana shorty after arriving in Europe and made and a broad diagnosis of American racial imbalance. Hours later, after chaos erupted in Dallas and five police officers were killed in sniper shootings that began during protests stemming from the Minnesota and Louisiana shootings, he promised justice.

“There is no possible justification for these kinds of attacks or any violence against law enforcement,” Obama said, speaking from the NATO summit in Poland that he is attending. “Anyone involved in the senseless murders will be held fully accountable. Justice will be done.”

Obama’s overseas trip comes at a time when the country has been shaken by violence, during a week with fatal clashes between police and communities of color, ending with the shootings in Dallas, the single deadliest day for law enforcement since September 11, 2001. The events also come during a heated presidential election where issues of gun violence and criminal justice reform have been in the spotlight, and come just hours before presumptive Democratic presidential nominee Hillary Clinton was scheduled to give a speech addressing the shootings from earlier in the week.

Even during the high-stakes summit focused on European unity, issues of race and violence dominated Obama’s early agenda in Poland. Obama’s remarks Friday gave no indication that he had plans to cut his trip short.

Obama, who noted he’s been receiving regular updates on the Dallas shootings, said he’d conveyed condolences to the city’s mayor, Mike Rawlings, and indicated the FBI was involved in investigating the shootings, which left 5 police officers dead.

Obama said he would weigh in again when more is known about the killers’ “twisted motivations.”

The President also made an implicit call for tighter gun restrictions, saying the carnage could have been mitigated if the killer or killers weren’t carrying powerful weapons.

“Today is a wrenching reminder of the sacrifices they make for us,” Obama said of law enforcement officers. “We also know when people are armed with powerful weapons, unfortunately, it makes attacks like these more deadly and more tragic.”

Obama said he wanted Friday to “focus is on the victims and their families.”

“They are heartbroken,” Obama said. “The entire city of Dallas feels this to its core. We are grieving with them. I ask you say a prayer for the officers and their families. Keep them in your thoughts.”

Obama was speaking from Warsaw, where he arrived early Friday for a summit of NATO leaders. His remarks on Dallas came at the end of a session with the presidents of the European Council and European Commission, where Obama plotted a path forward after Britain’s vote to exit the EU.

After arriving in Poland in the early morning hours Friday, Obama went to his hotel and delivered a statement about two police-involved shootings this week, saying the episodes reflected persistent racial disparity.

Citing statistics showing minorities are more likely to be pulled over, searched or shot at by police, Obama said it was incumbent on the country to aim for better — including recognizing deep-seated biases that he said must be “rooted out.”

“When people say ‘black lives matter,’ it doesn’t mean that blue lives don’t matter,” Obama said, referring to police officers. “But right now, the data shows that black folks are more vulnerable to these kinds of incidents. There is a particular burden that is being placed on a group of our fellow citizens.”