Dallas police shooting: Who were the victims? 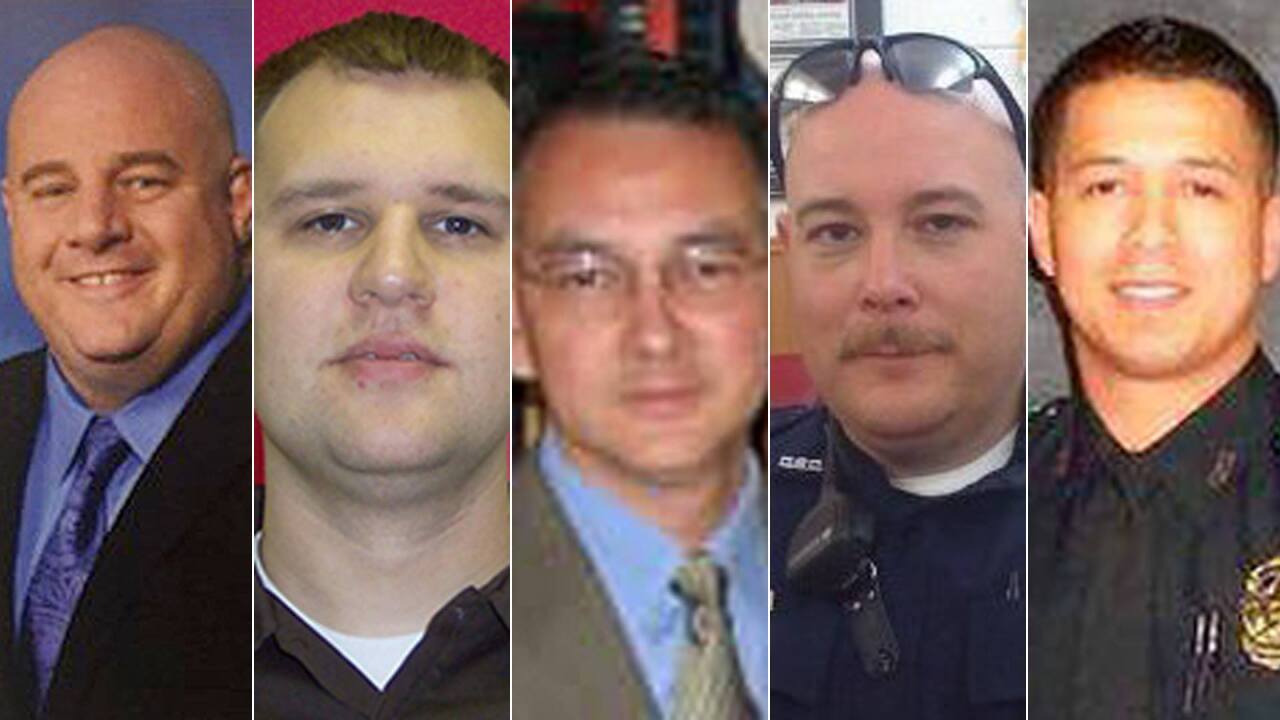 Officials have started to release the names of the officers who were killed or injured in the ambush in Dallas:

“Brent was a great officer,” said James Spiller, police chief of DART. “He was an outstanding patrol officer as well as a rail officer. We have the highest respect for him.”

Spiller and Gary Thomas, DART’s president/executive director, talked about Thompson and the violence in Dallas in appearances Friday on CNN’s “New Day.”

Twelve officers were shot — five are dead and seven injured — in the attack in downtown Dallas, the Dallas mayor’s office said Friday. The violence came amid protests over the deaths of two African-American men by police officers in Minnesota and Louisiana.

The four other slain officers were with the Dallas police. Their names have not been released.

Thompson, 43, a nearly seven-year veteran of the transit force, got married in the last two weeks, Spiller said. His spouse was a fellow transit officer

“He was in great spirits from his recent marriage,” Spiller said.

According to Thompson’s LinkedIn.com profile, he was “motivated by a ” ‘Team’ atmosphere.”

“I enjoy working on challenging tasks and problem solving with my peers. I am constantly looking for different ways to serve the department, this helps to keep my work from becoming sedentary and boring,” the officer said in his LinkedIn summary.

Thompson was an international police liaison officer for DynCorp International for nearly five years, starting in 2004, his profile said.

“My last position as an IPLO was Chief of Operations for Southern Iraq. I was responsible for the day to day operations conducted by our American police officers who trained and mentored the Iraqi Police,” he said on his profile.

He was in southern Afghanistan as well, according to the profile, where he was a “Team Leader” and “Lead Mentor” to the “Southern Provincial Police Chief.”

“In all locations we mentored and taught our Iraqi/Afghan counterparts democratic policing, and assisted in the establishment of the police department in these locations.”

“He was a dedicated officer, dedicated to the safety of Americans, all over the world certainly,” he said.

According to his LinkedIn profile, Thompson lived in Carrollton, Texas. Spiller said Thompson hailed from Corsicana, Texas, south of Dallas. He attended high school there and taught at Navarro College Police Academy, also in Corsicana.

Dallas Police Officer Patrick Zamarripa was one of the five police officers killed in the ambush in Dallas, according to social media posts from family members and reports from local media outlets. Zamarripa was a father of two, his family wrote; military records show he was a U.S. Navy veteran who had been deployed to Bahrain as part of the Iraq war effort.

According to the Navy Times, Master-at-Arms 2nd Class Zamarripa joined the Navy August 2001, and served with Mobile Security Squadron 21 in Portsmouth, Virginia, at Naval Air Station Pensacola, and with Naval Security Force, Manama, Bahrain, before transferring to the Navy Reserve in 2009. He was currently assigned to Navy Cargo Handling Battalion 13, Gulfport, Mississippi.

Zamarripa’s father told The Washington Post his son was a combat veteran who had completed three tours in Iraq.

“He comes to the United States to protect people here,” his dad said. “And they take his life.”

Zamarripa is survived by his wife, Kristy Villasenor, and his daughter Lyncoln.

Dallas Police Officer Michael Krol, a Michigan native, was one of the five officers killed during the shooting, according to ClickOnDetroit.com.

His uncle, Jim Ehlke, told reporters that being an officer was Krol’s life dream. He had previously worked for the Wayne County Sheriff’s Office from 2003 to 2007.

“He got into law enforcement and worked really hard to be a police officer.  He spent some time at the correctional facility. It wasn’t quite what he was looking for, so he worked pretty hard to find a job and got one in Dallas,” Ehlke said. “He was all in, he was all in.”

Senior Corporal Lorne Ahrens was shot and killed in a coordinated ambush attack during a protest in Dallas, TX.

Corporal Ahrens is the twenty-fifth officer to have been shot and killed in 2016 and is ninth officer fatality for the state of Texas.

Sergeant Michael Smith was shot and killed in a coordinated ambush attack during a protest in Dallas, TX.

Three suspects were taken into custody, one is dead after an hours long standoff with officers.

Sergeant Smith is the twenty-sixth officer to have been shot and killed in 2016 and is tenth officer fatality for the state of Texas.