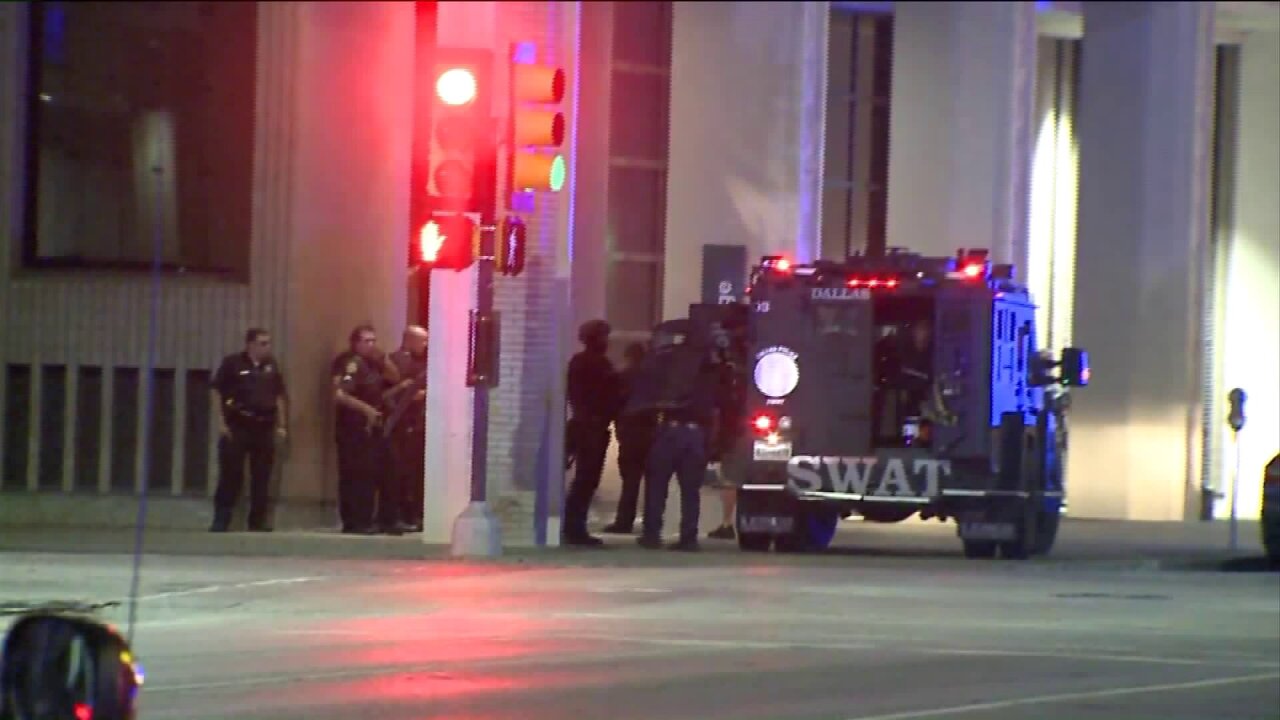 The ambush began with gunshots that killed five officers and sent screaming crowds scrambling for cover. It ended when a Dallas police bomb squad robot killed a gunman after negotiations failed.

According to a Dallas Police Department statement released Friday, the suspect has no criminal history. Information provided through the course of the investigation, indicates that the suspect was an Army veteran and others have identified him as a loner.

During the search of the Johnson’s home, detectives found bomb making materials, ballistic vests, rifles, ammunition, and a personal journal of combat tactics. Detectives are in the process of analyzing the information contained in the journal.

The deadly gunfire erupted in Dallas as videos showing two African-American men shot by police in Louisiana and Minnesota spurred protests and debate over police use of force across the country.

It has been a devastating night. We are sad to report a fifth officer has died.

As officials condemned the attack Friday, details emerged about the suspect who died after a lengthy standoff with police in a parking garage.

The suspect told police negotiators that he was upset about recent police shootings, that he wanted to kill white people — especially white officers — and that he acted alone, the city’s police chief told reporters Friday.

“We saw no other option but to use our bomb robot and place a device on its extension for it to detonate where the suspect was,” Chief David Brown said. “Other options would have exposed our officers to grave danger. The suspect is deceased as a result of detonating the bomb.”

Law enforcement sources familiar with the investigation told CNN that Johnson was the dead gunman. He had no criminal record or known terror ties, a law enforcement official said.

He had served in the U.S. Army Reserve, training as a carpentry and masonry specialist, two U.S. defense officials said.

Wayne Bynoe, a neighbor, said police cars were outside Johnson’s home Friday. Johnson lived with his mother and “keeps to himself,” Bynoe said.

The Dallas police chief told reporters it’s too soon to speculate on the suspect’s motives, and it’s unclear whether more suspects are on the loose.

“We’re hurting. Our profession is hurting. There are no words to describe the atrocity that happened in our city,” he said. “All I know is that this must stop — this divisiveness between our police and our citizens.”

U.S. Attorney General Loretta Lynch described the Dallas shootings as the latest in a series of tragedies that have left the country reeling.

“After the events of this week, Americans across the county are feeling a sense of helplessness, of uncertainty and of fear. Now, these feelings are understandable and they are justified,” she said, “but the answer must not be violence.” 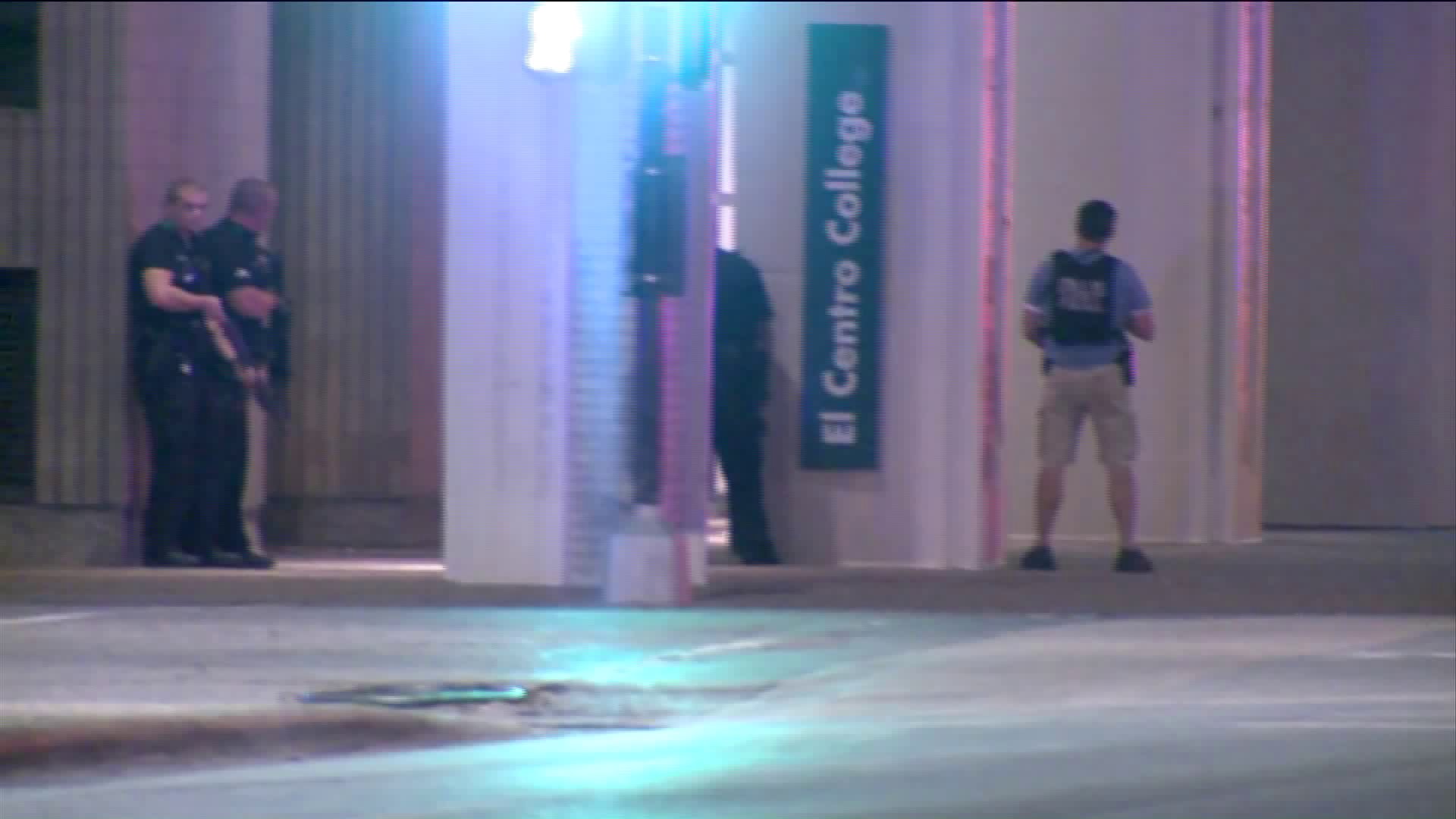 The Rev. Jeff Hood, one of the protest organizers, said he saw two officers go down, then watched a sergeant running toward the gunfire.

“I ran the opposite direction. I was concerned about the 700 or 800 people behind me,” he said. “I was screaming, ‘Run! Run! Active shooter! Run!’ And I was trying to get folks out as fast as I could.”

Crowds ran into a parking garage, witnesses said, and spilled out after word spread a sniper was nearby.

“Everyone was screaming, people were running,” said witness Clarissa Myles. “I saw at least probably 30 shots go off.”

Police previously said at least two snipers fired “ambush-style” from an “elevated position.” It wasn’t until Friday that Micah Johnson was identified and believed to be the lone suspect. Police exchanged gunfire and negotiated with him for hours at a parking garage in downtown Dallas.

Before authorities killed him with an explosive, Johnson told negotiators more officers were going to get hurt, and that bombs had been planted all over downtown.

Police have said at least 10 officers were shot by a sniper, and that one officer was shot in a shootout at the parking garage. It’s not clear where the 12th officer was shot.

Most of the injured officers have been released from the hospital, Brown told reporters. Their conditions are improving, Brown said, calling for the community to support them.

“We don’t feel much support most days. Let’s not make today most days,” Brown said. “Please, we need your support to be able to protect you from men like these, who carried out this tragic, tragic event.”

Dallas police Officer Patrick Zamarripa, a father of two, was one of the slain officers, according to social media posts from family members and reports from local media outlets. Military records show he was a U.S. Navy veteran who had been deployed to Bahrain as part of the Iraq War effort.

Read more: Dallas police shooting: Who were the victims?

His brother shared a photo on Twitter with the caption: “Love you brother. Couldn’t be prouder. We’ll see you again. #PrayForDallas.”

Thompson, 43, joined the transit agency in 2009, and was its first officer killed in the line of duty.

He was a highly respected officer, DART police Chief James Spiller told CNN. And just two weeks ago, he’d gotten married to a fellow officer on the force.

“He was in great spirits,” Spiller said.

Brown said an investigation into the ambush continues. “Through our investigation of some of the suspects, it’s revealed to us that this was a well-planned, well-thought out, evil tragedy by these suspects,” he said Friday at a prayer vigil for the victims. “And we won’t rest until we bring everyone involved to justice.”

He would not say how authorities believe others in custody are connected to the shooting.

Previously, authorities had said three people were in custody, and that multiple shooters were involved in the attack.

“I’m not going to be satisfied until we’ve turned over every stone. We’ve got some level that this one suspect did do some of the shooting. But we’re not satisfied that we’ve exhausted every lead,” he said. “So if there’s someone out there who’s associated with this, we will find you, we will prosecute you, and we will bring you to justice.”

Asked about the gunman’s motive, Brown declined to speculate.

“We can’t get into the head of a person that would do something like this. We negotiated with this person that seemed lucid during the negotiation. He wanted to kill officers, and he expressed killing white people, he expressed killing white officers, he expressed anger for Black Lives Matter. None of that makes sense,” Brown said. “None of that is a reason, a legitimate reason, to do harm to anyone. So the rest of it would just be speculating on what his motivations were. We just know what he said.”

The shootings occurred as many Americans nationwide took to the streets to demand answers over the killings of two black men in two days. They wept, marched and chanted, “Black Lives Matter!”

In St. Paul, Minnesota, crowds gathered near the spot where an officer killed Philando Castile in a car on Wednesday.

Hundreds of miles away, protesters marched outside a convenience store in Baton Rouge, Louisiana, where Alton Sterling was fatally shot Tuesday while police tackled him in a parking lot.

In Dallas, protest organizers Friday condemned the violence and said that they never imagined someone would attack their peaceful demonstration.

#breaking Crowd on the run downtown Dallas. Reports of an officer shot at the protest march. pic.twitter.com/zstZnDIRlm

Hood, one of the organizers, said he spent hours searching for his wife as chaos unfolded in the streets.

Both killings were captured on video and posted online.

In Minnesota, the shooting of Castile was remarkable — and heartbreaking — because his fiancée streamed the immediate aftermath live on Facebook.

As her 4-year-old sat in the back seat, Diamond Reynolds calmly narrated what was going on and showed viewers the dying man groaning and bleeding in the front seat.

Castile, a school food services worker, was shot in Falcon Heights, outside Minneapolis, when a police officer pulled him over because of a broken taillight, said Reynolds, who was in the car with him.

“He let the officer know that he had a firearm and he was reaching for his wallet and the officer just shot him in his arm,” she said as she broadcast the Wednesday shooting on Facebook.

“Oh God, please don’t tell me my boyfriend is dead,” she said.

Sterling, 37, was killed Tuesday near a convenience store in Baton Rouge, where he regularly sold CDs and DVDs.

A homeless man approached Sterling on Tuesday and asked for money, becoming so persistent that Sterling showed him his gun, a source told CNN.

The homeless man called 911, and police arrived at the store. Police tackled Sterling to the ground, and shot him several times, video shows.

A law enforcement source told CNN that the officers pulled a gun from Sterling’s body at the scene. No further details were provided on the type of firearm.

The convenience store quickly became the site of protests. Flowers and signs piled up in a makeshift memorial. Protesters chanted “Hands up, don’t shoot,” the line made famous in the Michael Brown shooting in Ferguson, Missouri, about two years ago. Brown was also shot by a police officer.