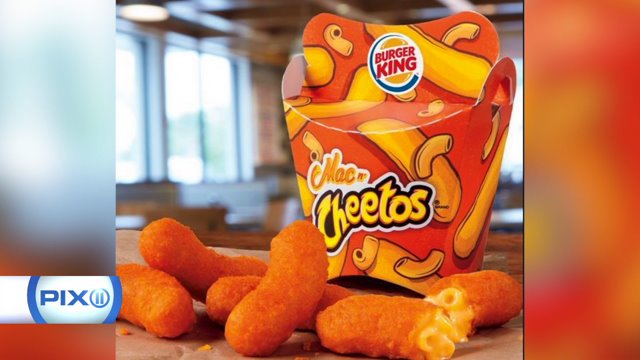 Burger King is rolling out a hybrid snack that has the internet buzzing – deep fried sticks of macaroni and cheese breaded with a crispy, Cheetos-flavored exterior.

The restaurant chain is already testing the new Mac 'n Cheetos, the product of a partnership Frito-Lay, in some locations, according to Bloomberg. The rollout will extend to restaurants nationwide, but the offering will be for a limited time – eight weeks or until supplies run out.

"We're partnering up with one of Americans' favorite brands," Burger King North America President Alex Macedo said. "We're working on a few more menu items ... there's room for us to do more together in the future."

The Mac 'n Cheetos is being seen as Burger King's answer to Taco Bell's Doritos Locos Tacos, a menu offering that helped boost the chain when many of its restaurants were struggling.

Here's a sampling of the (mostly positive) reactions on Twitter Wednesday:

You may mock Trump as Cheeto Jesus, but how else to explain the miracle He has brought us? https://t.co/YdH9cyWNVE https://t.co/HiMsbMQiPL

IT WAS RIGHT THERE

there is a god and he loves us pic.twitter.com/BmyEtJKrcd

I just sent three adults a calendar invite to go to a Burger King to eat Mac N' Cheetos. https://t.co/SomtDow8nR

"And when he had opened the seventh seal, there was silence in heaven about the space of half an hour." https://t.co/pNvShap68Q