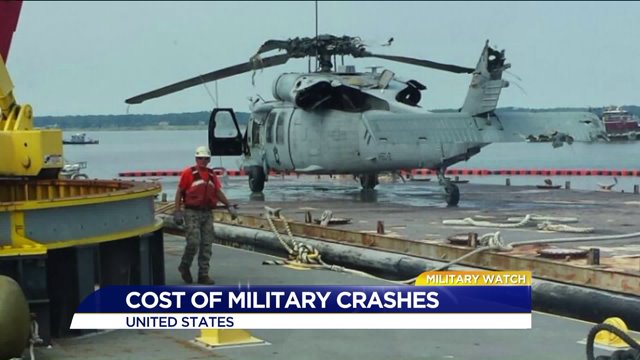 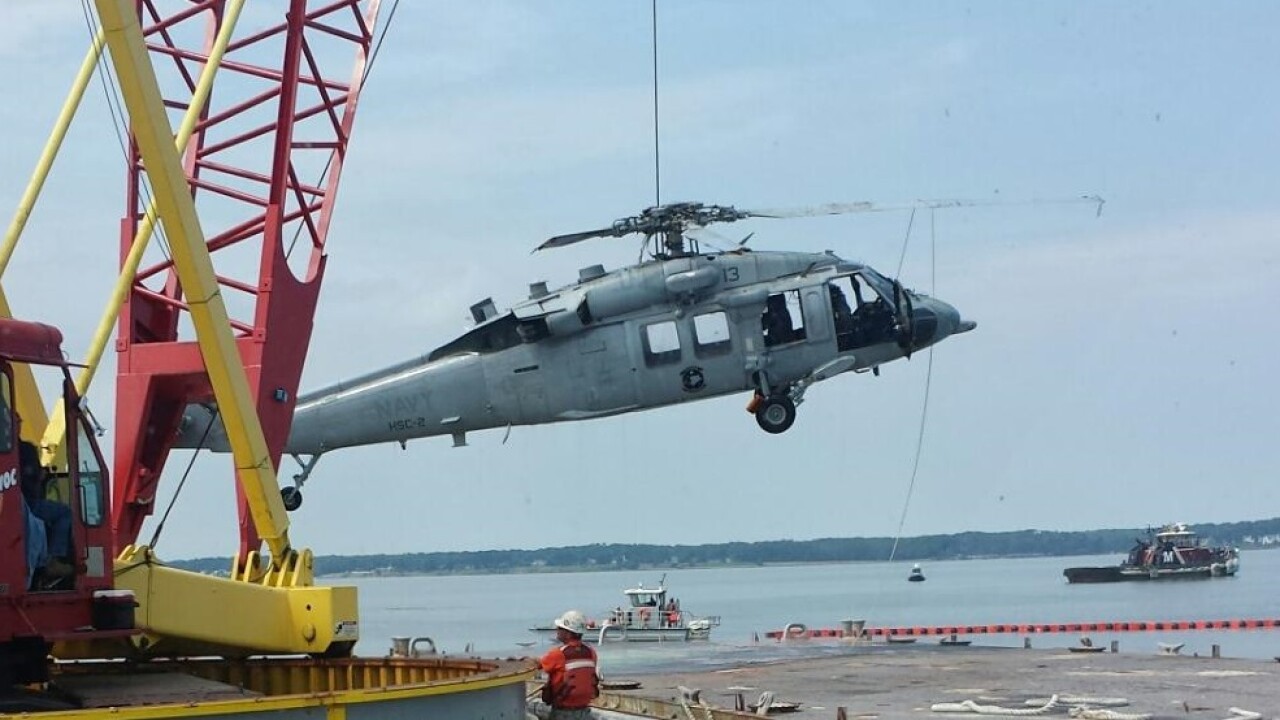 WASHINGTON (CNN and WTKR) -- A rash of recent military crashes has cost the lives of several service members as well as billions of dollars worth of damages. The wave of accidents has raised questions about the training of pilots and the maintenance of aircraft, with top brass pointing to slashed budgets and aging fleets strained by prolonged conflict.

Last week, an MH-60S helicopter crashed in the James River in Virginia during a training mission. Earlier this month, two F-16C fighter jets collided in the skies over Georgia.

In the first incident all of the helicopter crew were rescued and in the second the two South Carolina Air National Guard pilots managed to safely eject. But a few days earlier, a Blue Angels pilot was killed when his jet crashed. An Air Force Thunderbirds demonstration squadron jet crashed the same day, but that pilot managed to successfully eject.

During congressional testimony in March, the assistant commandant of the Marine Corps, Gen. John Paxton, acknowledged the growing rate of accidents.

"We are concerned about an increasing number of aircraft mishaps and accidents," he told the Senate Armed Services Committee.

He continued, "If you fly less and maintain slower, there's a higher likelihood of accidents. So, we're worried."

The Navy has suffered the heaviest losses of the three military branches since October 2014.

From that time through April 2016, the Navy has reported accidents that total over $1 billion in damages, according to statistics provided to CNN by the Naval Safety Center. They included a Marine AV-8B Harrier jet that crashed off the East Coast during takeoff in May, costing about $62.8 million, and a Navy F/A-18A crash in Nevada in January that cost $71 million. Both pilots survived.

News3 also obtained information about the recent crashes in Virginia and North Carolina. According to the Naval Safety Center, the two F/A-18F Super Hornets that crashed off the coast of Cape Hatteras in May cannot be repaired and will never fly again. Since both are valued at $86.6 million, the cost of that crash is around $173.2 million.

The cost of the crash involving an MH-60S into the James River in June is not quite as clear yet. According to the Naval Safety Center, the cost of an MH-60S is $25.5 million but it has not been determined yet if the helicopter will be repaired or removed from service.

"We continue to have lower than acceptable numbers of aircraft available to train and fight," he said.

Grosklags said that the 2013 budget cuts known as sequestration had caused the Navy to lose about 10% of its maintenance crews for some of its older planes, including the F/A-18, which first entered service in 1983 and whose planned 30-year life-span has been repeatedly extended due to increased combat operations and lack of replacement jets.

The issue is compounded by the fact that the Navy's replacement plane, the F-35C Joint Strike Fighter, has been repeatedly delayed and is not scheduled to reach initial operating capability until 2018.

The F-35 Joint Strike Fighter has been beset by spiraling costs, failed testing and schedule delays. The F-35 program had originally promised 1,013 fighters by fiscal year 2016 but has only delivered 179 as of April. The Navy's version will be the last to reach initial operating capability.

The Marines, however, suffered the deadliest military aviation tragedy in years when two CH-53 helicopters crashed while on training flight in Hawaii in January, killing 12 Marines. The Navy estimates that the crash cost nearly $110 million.

Describing the CH-53s in March, Davis said, "They are getting old and wearing out. We can only keep them going for so long."

When Rep. Mac Thornberry, chairman of the House Armed Services Committee, asked about the increased rate of accidents in March, the commandant of the Marine Corps, Gen. Robert Neller, attributed the increase in "our mishap rate" to a lack of training resources.

"The simple fact is that we don't have enough airplanes to meet the training requirements for the entire force," he said.

The Air Force, for its part, has also experienced a significant number of accidents.

Since October 2014, the Air Force has had 27 "Class A mishaps," accidents that result in a fatality, loss of an aircraft, or property damage of $2 million or more involving fixed-wing aircraft, an Air Force public affairs officer told CNN.

But Air Force Public Affairs Officer Capt. Annmarie Annicelli noted that the rate of accidents has decreased in 2016 compared to fiscal year 2015, saying that at this point last year, the Air Force had 13 Class A mishaps compared to eight this year.

According to an analysis of the statistics provided before the June incidents, the Air Force has lost over $526 million in damaged or destroyed aircraft since October 2014, nearly half of that from downed F-16s, another plane that is due to be replaced in part by the long-delayed F-35A.

During that period, the Air Force lost a B-52 Stratofortress after a crash in Guam in May, a C-130J transport plane after an October accident in Afghanistan and a RC-135 crashed in April 2015. The latter two crashes resulted in $174 million in damage to both the planes and surrounding environment.

The Army has also faced issues with its aircraft, primarily helicopters such as the UH-60 Black Hawk and AH-64 Apache.

The Army's Combat Readiness Center told CNN that the Army had 19 Class A aviation accidents resulting in 6 fatalities from October 2014 to October 2015, including a UH-60 crash near Fort Hood, Texas, which cost the lives of four soldiers.

Appearing at the same Senate Armed Services hearing with Neller, the chief of staff of the Army, Gen. Mark Milley, said the increase in Class A accidents "has our attention," citing efforts to increase training hours for helicopter pilots.

"Our aircraft accidents have increased and we are very concerned about it," he said.

Top military leaders have said that while they want to increase training, they have had to prioritize combat operations at the expense of other activities in an era of restricted budgets.

Goldfein told Congress, "25 years of continuous combat coupled with budget instability and lower-than-planned top lines have made the Air Force one of the smallest, oldest and least ready in our history."
TM & © 2016 Cable News Network, Inc., a Time Warner Company. All rights reserved.